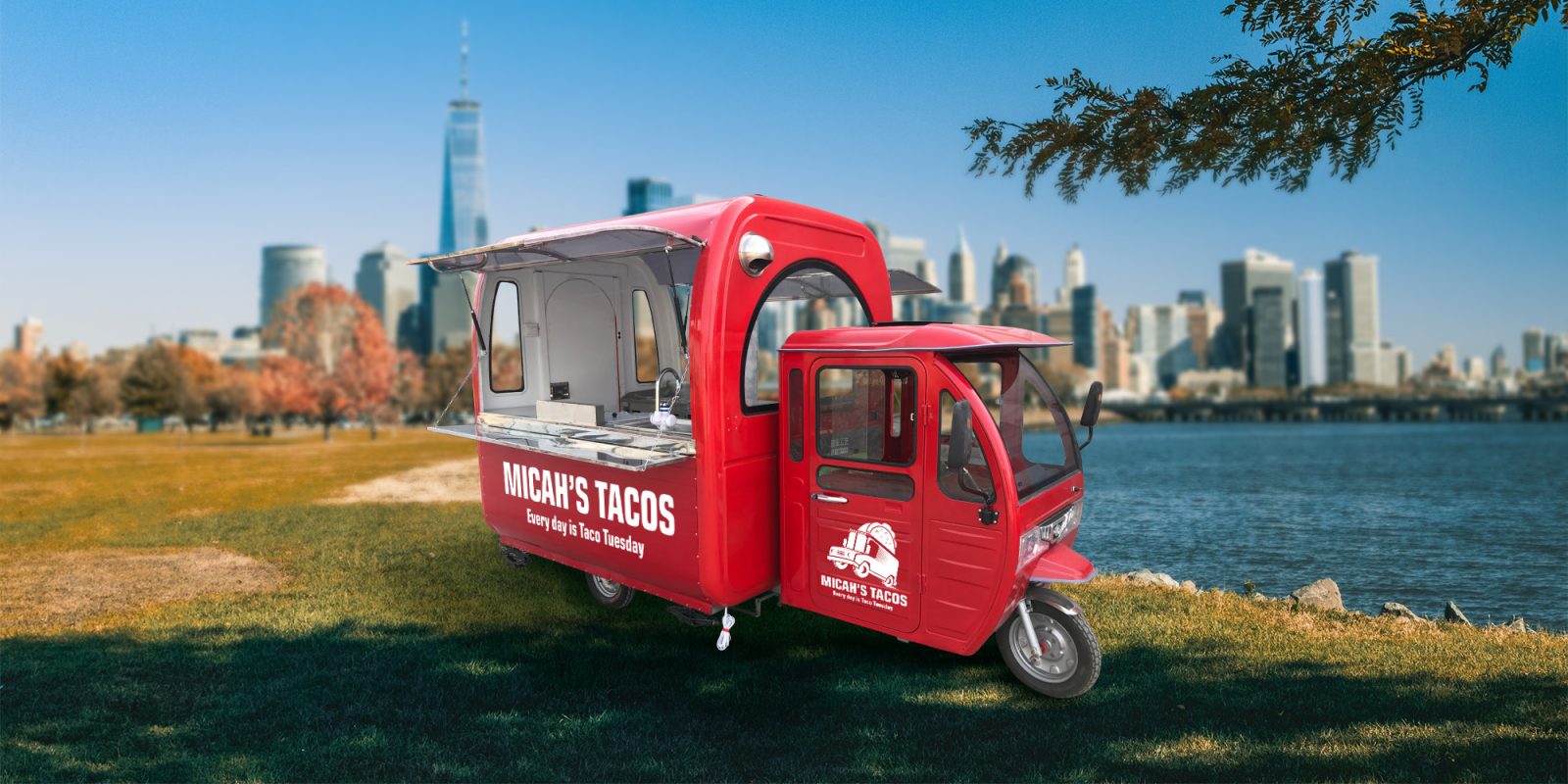 Many of my favorite Awesomely Weird Alibaba Electric Vehicles of the Week have been purely for fun – vehicles designed for enjoying life one underpowered mile at a time. But this week I think it’s high time that I stop fooling around so I can buckle down and get myself a real imaginary job. And I think this electric food truck might be just the thing I need!

It’s got everything I could ever want out of a food truck, unless of course what I want is four wheels.

But if you’re willing to make the stability sacrifice that comes with tricycles, then this three-wheeled food truck could be your first step toward complete financial independence.

It’s that sweet spot where culinary competence meshes perfectly with entrepreneurial excellence. Toss in a dash of cheap engineering, two tablespoons of extra-high center of gravity, and then season it to perfection with a generous helping of unnecessary random windows.

Yep, I think I’ve found it. This is exactly what I need to open my own eco-conscious Micah’s Taco Truck. Or Taco Trike.

I’m still working on the name.

This thing is perfect! Not only is it crazy cheap at just $2,050, but it already comes kitted out with pretty much everything I need.

Included in the price are all of the stainless steel cabinets and work surfaces, a sink with hot and cold taps, an electric water heater, 20L water tanks (one for clean water, one for waste – don’t mix those up or you’ll end up making extra spicy tacos), a cash drawer, an aluminum diamond plate floor, an electrical junction box with wall outlets and ceiling light, and welded-on car jacks in the corners. Suhh-weeeeet!

As wide as the rear compartment looks, I’m a bit surprised at how far inset those rear wheels are. Hitting anything other than a gentle curve at full speed seems like a taco recipe for disaster.

Then again, the designers appear to have that problem solved by ingeniously designing in a safety device in the form of a teeny tiny motor. This bad boy only tops out at 40 km/h (25 mph) thanks to its paltry 1,100W powerplant, but I still don’t really want to get it up on two wheels in the turns with a vat of hot deep-fryer oil in the back.

My cute little food trike might not look like a marvel of modern engineering, but there are some nice touches hidden inside. Instead of the typical lead acid battery pack, the designers outfitted it with a Li-ion 48V 45Ah battery. That already saves me from having to spend a few hundred bucks on lithium-ion batteries from Amazon to bring my new taco truck into the 21st century.

Now all I need to do is slap on a couple cheap solar panels and the roof could probably generate several hundred watts of charging power – enough to keep my batteries fuller than the last chalupa at closing time.

Despite poking a bit of fun at the design, I have to give kudos to the designers at Henan Alchemy Machine CO., LTD for occasionally thinking outside the taco box.

Despite the cab being a one-seater, they still put two doors on it, just in case you want to mix things up every now and again. I think that technically makes it a coupe too. Dang, this thing is getting cooler by the minute!

All jokes aside, should you get it?

So here’s the thing. I’m probably not going to give up my uber-glamorous job of thankless journalism for a new career path as a food truck proprietor, but I still think this is actually a pretty awesome product.

In all seriousness, food service is an incredibly important industry, and it’s also a real chance for many people to control their own financial future and work for themselves while doing what they love. The fact that you can get your own little food truck for $2k is pretty awesome. I could actually see people doing this.

And as long as you’re sticking to urban use, the 25 mph (40 km/h) speed limit isn’t even that bad. The thing looks funny enough that drivers should see you from a distance and give a wide berth if they need to pass. Plus, how much time will you actually need to drive it? The whole point of a food truck is that it spends 99% of its life parked. You’re not tossing tamales from the open window at highway speeds, folks.

Even as practical as I honestly think this food trike is, I’m not suggesting you hop into the deep end of Alibaba without doing your research first. Communication is key when shopping on Alibaba to ensure you know exactly what you’re getting.

But like I said at the top of this article, while many of my silly Alibaba finds are just for fun, I think a food trike like this has serious merit. I’d love to see more of these around in the West, serving up hot meals and warm smiles at the same time.

I just hope the tacos taste the same without the seasoning of exhaust fumes.