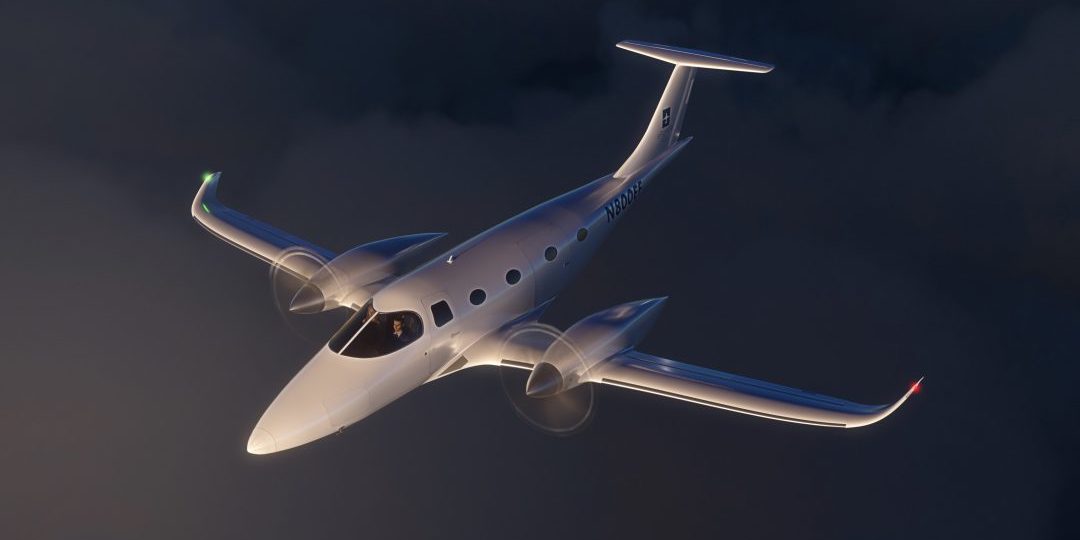 As a pilot and electric vehicle enthusiast, I’ve been waiting for a larger cabin aircraft to emerge from all of the electric plane startups. Bye aircraft, which is named after its founder, George E. Bye, not the salutation, may have a winner in its new gorgeous 8-seat turboprop-class eFlyer 800…

The eFlyer 800, announced today, will have only one-fifth the operating costs of traditional twin turboprops and is geared for the air-taxi, air-cargo, regional, and charter aircraft markets. However, Internal combustion and jet aircraft often have much longer ranges, so this plane will focus mostly on short-haul one- to two-hour flights.

Bye notes that eFlyer 800 customer deposit agreements are currently being developed with US and European air taxi, air cargo, and air charter services and will be finalized and announced soon.

“The eFlyer 800 is the first all-electric propulsion technology airplane that achieves twin-turboprop performance and safety with no CO2 and extremely low operating costs,” said George E. Bye, Bye Aerospace CEO. “This type of remarkable economy and performance is made possible by the electric propulsion system and advanced battery cell technology that results in significantly higher energy densities.”

The eFlyer 800 has an impressive drivetrain developed in conjunction with Safran:

Bye Aerospace and Safran are currently assessing the most efficient electric powertrain for the eFlyer 800 (dual ENGINeUS™ electric motors and GENeUSGRID™ electric distribution and network protection system). “Safran product lines with the ENGINeUS™ motors, rated from 50kW to 500kW/1MW and GENeUSGRID™ systems, perfectly fit with the Bye Aerospace portfolio of e-aircraft,” said Hervé Blanc, executive vice president and general manager power with Safran Electrical & Power. “Building upon our successful cooperation on eFlyer2 and eFlyer4, we are very proud to bring our best expertise to support Bye Aerospace in the design of the new eFlyer 800.”

Perhaps the most interesting bit is that there might be an option for supplemental power solar cells that could increase the range by charging on the ground or even while in the air. However, the few kWh that the solar cells can produce won’t be able to keep the plane aloft indefinitely, just add a few miles of range.

The other neat feature that Bye is considering is motorized taxi wheels that would allow it to pull up to the runway like a car and only need props for a takeoff. Theoretically, those electrified wheels could also help speed up the plane for takeoff and even regen brake on landing saving costly brake repairs.

What a great regional airplane offering to replace those small short route planes out there. The fuel savings will not only green the skies but it will save a ton of money and allow more people to fly.

I’m surprised this isn’t also marketed toward the personal jet market for those that want to reduce their carbon footprint. Folks like Tesla CEO Elon Musk who often commute from Los Angeles to San Jose would be great candidates for this airplane.

As a pilot I’d love to have something like this for trips with the family, although having to put it down once or even twice on a trip from New York to Florida loses some of the appeal. Oh, and it’s probably a little out of my price range.

Bye, if you are out there, let’s line up a test flight!