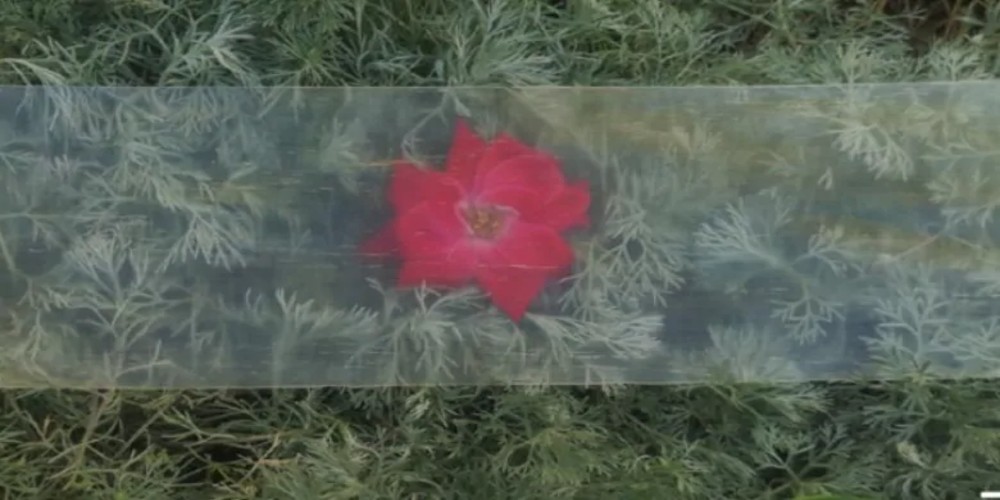 Scientists at the University of Maryland have developed a transparent wood that “is a promising candidate for applications in energy-efficient buildings” – and the method they used is surprisingly simple.

Wood is made of cellulose, which are tiny fibers, and lignin, which bonds those fibers together. Lignin also contains molecules called chromophores, which make the wood brown. So scientists have been trying to remove the lignin, but they’ve previously used hazardous chemicals and high temperatures. The old method was also time consuming.

But these researchers changed the lignin rather than removing it, and their method is much more simple. CBC explains:

Starting with planks of wood a meter long and one millimeter thick, the scientists simply brushed on a solution of hydrogen peroxide using an ordinary paint brush. When left in the sun, or under a UV lamp for an hour or so, the peroxide bleached out the brown chromophores but left the lignin intact, so the wood turned white.

Next, they infused the wood with a tough transparent epoxy designed for marine use, which filled in the spaces and pores in the wood and then hardened. This made the white wood transparent.

The wood made with the new method is 90% transparent. Here’s a short demonstration video:

How is it energy efficient?

Transparent wood made using this new method could replace window glass, as it provides much better insulation. Glass windows are a major source of heat or cooling loss. Plus, the transparent wood is much more durable than glass.

(I’d just like to add that I’d be extremely enthusiastic to have this in my window openings, as I live in an area prone to hurricanes. These could put the hurricane shutter companies out of business.)

This transparent wood is lighter, and the team found it to be 50 times stronger than transparent wood made the old way. So it could potentially be used as load-bearing walls – as in, entire transparent walls, like on big glass buildings. And the researchers say it could be used for roofs, too. Imagine the light, without the energy loss.