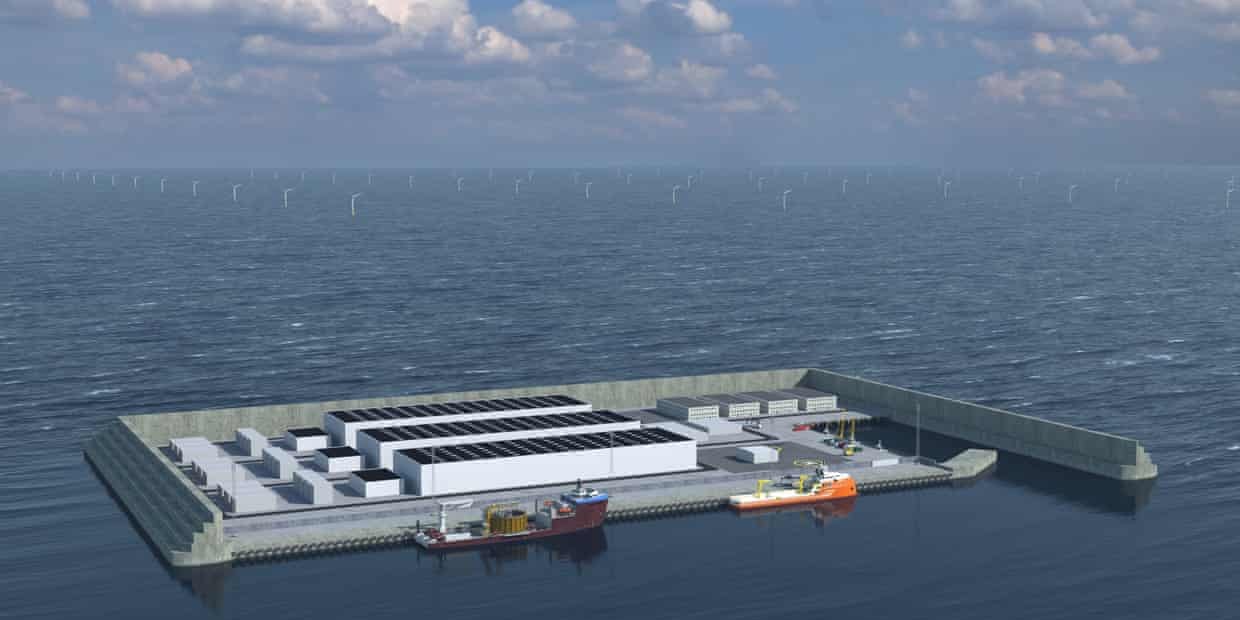 Denmark is going to build a $34 billion artificial wind energy island, which will be located 50 miles (80 km) offshore, in the North Sea, near the Jutland peninsula in the north. Construction of the island is expected to start in 2026.

The Danish coalition government has agreed to take a 51% stake in the island. The private sector will hold the remainder. The Danish government’s website says:

The state will own the majority of the island, but private companies will be crucial for the project to fulfill the potential as regards to innovation, flexibility, cost-effectiveness, and business potential.

The energy hub will serve as an offshore power plant that gathers and distributes green electricity via the grid from hundreds of wind turbines surrounding the island directly to consumers in countries that border the North Sea. As pictured above, high sea walls will protect it on three sides from rough North Sea weather, and the fourth side will feature a dock.

The artificial island will offer the best opportunities to expand the project, for example by building a harbor and facilities for storage and conversion of green electricity from the nearby wind turbines in the sea. It is the long-term ambition to be able to store green electricity on the island, convert it to liquid green fuel, and send it via subsea cables to Denmark and neighboring countries.

Furthermore, the abundance of offshore wind energy can be used to produce climate-friendly fuels for shipping, aviation, heavy industries, or heavy-duty vehicles.

The 1.29 million-square-foot (120,000-square-meter) artificial island, in its first phase, will be able to provide 3 million households with green energy.

Denmark will also build an energy hub on the island of Bornholm in the Baltic Sea off Sweden’s southern coast. The two hubs’ initial capacity will be 5 GW, triple the current installed offshore capacity in Denmark. They will later be expanded to provide a total capacity of 12 GW.

Denmark has set the cutoff date of 2050 for oil and gas extraction in the North Sea. Denmark is currently the largest oil producer in the EU.

South Korea today unveiled a 48.5 trillion won ($43.2 billion) plan to build the world’s largest offshore wind farm by 2030. The project will have a maximum capacity of 8.2 gigawatts. That’s the equivalent of energy produced by six nuclear reactors.

It’s considerably larger than the current world’s largest offshore wind farm: Hornsea 1 in the UK, which has capacity of 1.12 GW.

The project is a major part of South Korean president Moon Jae-in’s Green New Deal, which, as Electrek reported, was announced in July 2020. Investment in electric and hydrogen vehicles also plays a major part in that plan, which aims to make the country carbon neutral by 2050.