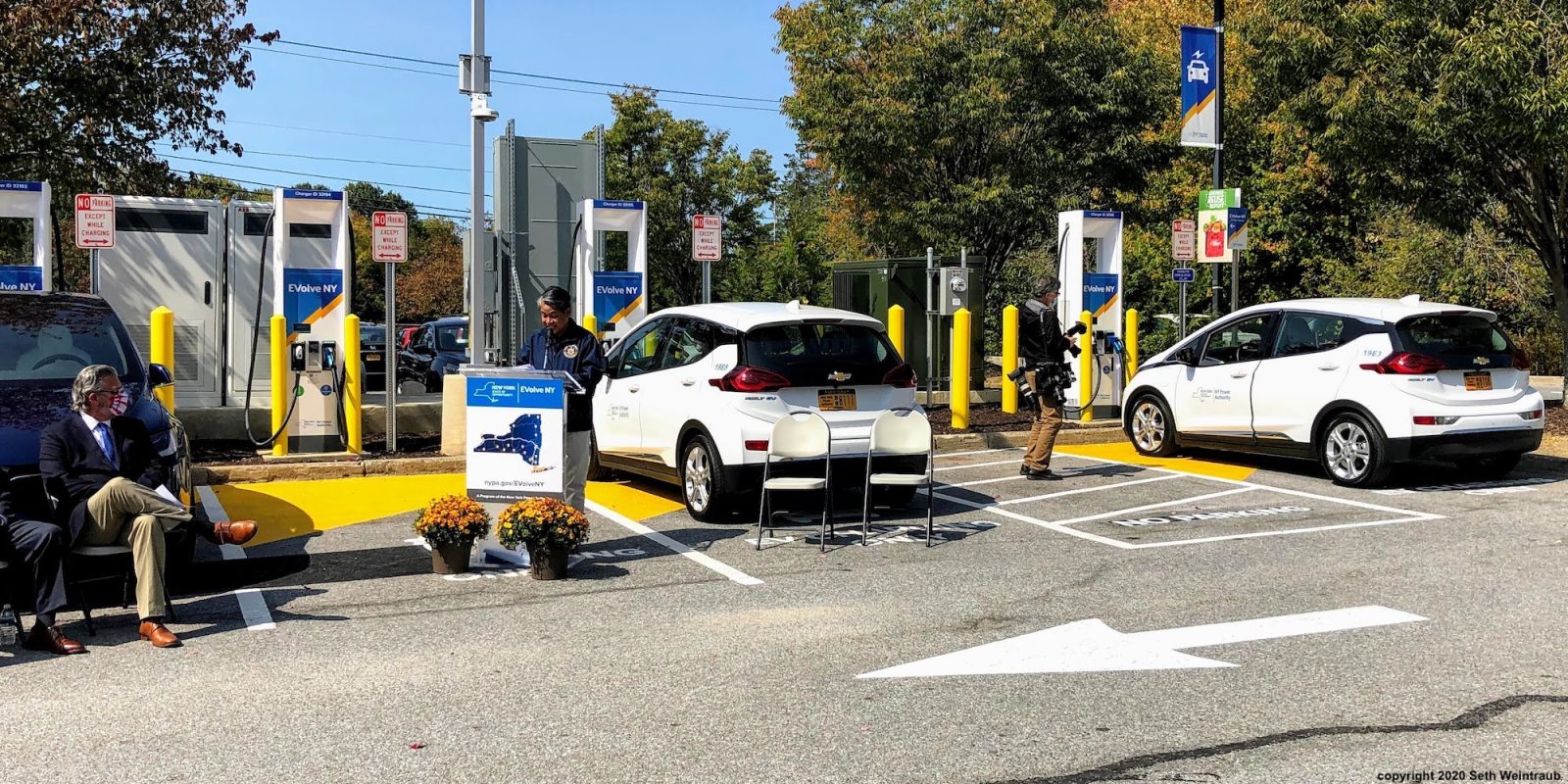 I was on hand yesterday for the ribbon-cutting of EVolve NY’s first operable electric vehicle fast charging station in LaGrangeville, New York. The location, at a Tops supermarket adjacent to the Taconic Parkway, is about halfway between New York City and the state capital in Albany. NYPA plans to blanket the state in these DC fast charging stations which will allow New Yorkers to travel within the state on electricity without excuses.

The event yesterday was attended by Lt. Governor Kathy Hochul, who said, “During Climate Week, the announcement of the state’s first EVolve NY high-speed electric vehicle charging hub advances our commitment to reduce carbon emissions and achieve significant savings in fuel cost. As part of our EVolve NY program, this project helps encourage New Yorkers to buy electric vehicles as we establish more charging stations across the state. We are committed to ensuring New York State continues to lead in building back better, cleaner and greener now and in the future.”

The NYPA is a New York State public-benefit corporation that operates as the largest state public power utility in the US. About 80% of the electricity NYPA produces is clean renewable hydropower, and the company also announced this week the biggest rooftop solar array in Manhattan on top of the Javits center.

By the end of 2021, EVolve NY’s fast charging network will include 200 chargers at 50 locations along major New York transportation corridors, as well as in key urban hubs from Buffalo to New York City. By the end of 2022, EVolve NY, in collaboration with NYSERDA and the private sector, will deploy additional fast charging stations to ensure New York State meets Governor Cuomo’s ambitious target of at least ten fast charging locations in each of the state’s ten Regional Economic Development Council regions. EVolve NY will then continue to drive the EV charging network forward so that at least 800 new fast chargers are installed throughout the state by 2025.

200 chargers, 50 locations by the end of 2021 = EVolve NY will form a robust network that will enable drivers to travel all of New York State with confidence:

One thing I really like about the EVolve EV model is that there are no subscriptions or time charges. It is straight $.35/kwh. And while you probably get a significantly cheaper electricity rate at home, NYPA’s charging stations and infrastructure isn’t cheap and they have to pay the bills. So for 40kWh, that would be a price of $14. Certainly not cheap but more or less equivalent to the price of gas. EV owners are paying for convenience and speed here.

The map below shows current and planned stations. Upcoming sites through 2020 will include a 10-charger station at JFK and smaller sites at Schroon Lake, Watertown, Fairport, and Malone…and more to be announced this year.

Not all of the DC fast charging stations will be 350kW capable but they will be over 100kW for CCS combo, upgradability and will also include 50kW Chadamo for the time being. Tesla, which owns about 80% of the current US EV market, owners in the US will have to use a separate Chadamo adapter until the company releases a CCS adapter. It currently offers a CCS adapter in Europe.

The station at LaGrangeville can provide up to 350kW charging, however if 2 stations are being maxed out at once the charge will be limited to 175kW/each. That’s still enough to get most vehicles around 200 miles of range in about 15-30 minutes.

Incidentally, we tried maxing out the charging station but the weather and lack of pre-conditioning only allowed the Porsche Taycan to charge at 150kW.

It is extremely heartening to see my home state taking the lead on providing fast charging infrastructure instead of relying solely on for-profit entities like EVGO, Electrify America and Shell’s Greenlots. If you are a prospective EV buyer in New York and you look at the map coverage, you know that you can travel just about anywhere in the state worry-free, once the network is fully up and running.

But, as is often the case, the devil is in the details here. The charging stations were supposed to go live about eight months ago at the NY Auto Show. Obviously COVID slowed things down but also getting the billing system, which is managed by Greenlots running, is still a problem. I plugged in my Tesla via Chademo adapter and the charging system initiated via Apple Pay but then dropped out. I tried again with Google Pay, and it failed again. People on the adjacent charger also were having problems initiating a charge. NYPA says the Greenlots system was working previously but glitched on the day of the event.

I had about 200 miles on my Tesla, so it was only just to get a top off and check the system working, but if I was an EV owner without an alternative, this would have been a high anxiety situation, particularly in the wintertime. An EV owner would have likely spent a bunch of time on the phone reading off credit card numbers to an operator. Unfortunately, this has been my experience at a lot of charging stations over the past 10 years. If you look at the Plugshare app, many people are already having problems.

NYPA says their charging stations, which are ABB hardware, will accept the no payment ISO 15008 “Plug and charge” standard for CCS combo vehicles. Unfortunately, no electric vehicles can currently use the new standard which would allow an experience theoretically as easy as Tesla’s.

Just like all stakeholder-based companies, the interests of the NYPA are squarely in New York. That means that frequent destinations like Vermont, Connecticut and New Jersey aren’t prioritized. For instance, a great place to put a charging station with be between Chatham and Hoosick NY, halfway between NYC and Vermont ski slopes. But that isn’t on NYPA’s radar even though it is probably a priority for tons of NYers (or maybe just me).

So the larger question is, should the NYPA be the ones building out the infrastructure for fast EV charging? Maybe they should just outsource the whole thing to EVGO or Electrify America? What’s the point in reinventing the wheel?

I think it is a good thing not to have a for profit company running this as these entities often have charging stations popping up in affluent areas and not in rural areas where they are needed the most. NYPA puts the needs of New Yorkers at the top of its priority list.

The people I spoke with at NYPA certainly seemed adept and understood the electric vehicle charging landscape. This is the first real consumer facing product for the utility however and there are going to be some hiccups. The company doesn’t need to make a profit, but they do need to break even so covering the costs on these stations will be expensive. I’m just very hopeful that the experience is a good one for EV drivers.

As far as I’m concerned, the more charging locations and players the better, as long as they are easy to use and compatible. I’m glad the NYPA took on this endeavor and feel like it will be a benefit for all NYers (and visitors too!).