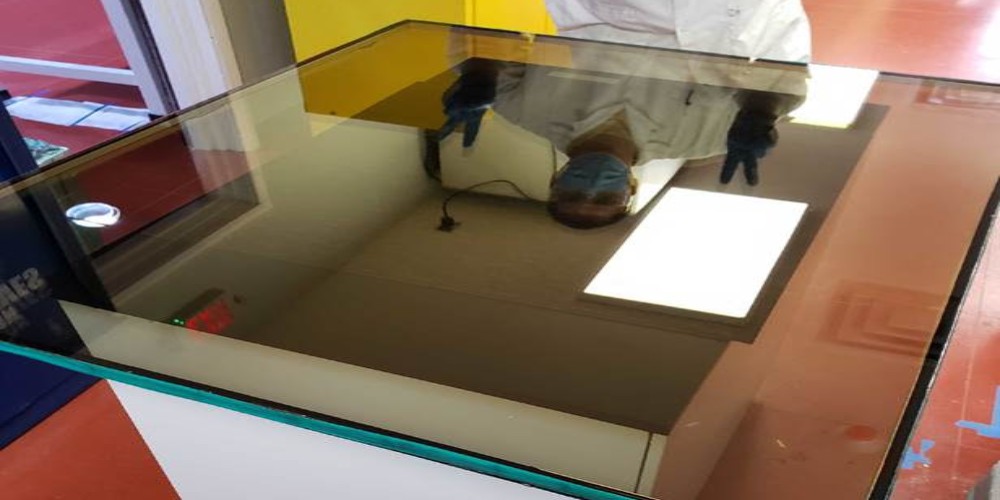 The Journal of ACS Applied Materials has published new research that describes a breakthrough in optimizing solar window technology.

A team of scientists at UbiQD, an advanced materials company in Los Alamos, have achieved landmark efficiency for solar windows without compromising on aesthetics.

Solar windows passively produce solar power, and they could be a game-changing clean-energy technology. Up to now, solar windows available today have lacked transparency due to electronic components embedded in the glass. These new windows (pictured above) are more translucent.

Laminated-glass, luminescent solar concentrators (LSCs) offer localized and sustainable power generation combined with the customizable transparency needed for windows. Successful commercial deployment of LSC technology depends on the demonstration of economically viable efficiency, while maintaining excellent aesthetics. In this work, multiple-interlayer CuInS2/ZnS quantum dot LSC devices comprised of laminated glass are presented. Three-interlayer LSC designs demonstrated a certified electrical power conversion efficiency of 3.6%. Furthermore, a method of combining dyes and QDs is presented for tuning color towards true-gray from brown. These advances aim to enable LSC technology to be more rapidly adopted in the next generation of energy-efficient buildings.

Most solar panels sold in 2020 have efficiencies between 15% and 20%, according to the National Renewable Energy Laboratory (NREL), so 3.6% isn’t exactly awesome, but this is a step forward in figuring out how to turn windows into clean energy generators while not compromising on transparency.

A new study from the University of Oxford that looked at more than 3,000 utilities found that only 1 in 10 of the world’s electric utility companies are prioritizing investment in green energy over fossil fuel power plants.

Most remain heavily invested in fossil fuels, and some are even growing fossil fuel capacity. The research, which was published in Nature Energy, found that only 10% of the companies in the study are expanding their green energy capacity at a faster rate than their gas- or coal-fired capacity. As the abstract states:

Strikingly, 60% of the renewables-prioritizing utilities had not ceased concurrently expanding their fossil-fuel portfolio, compared to 15% reducing it.

Ten percent of utilities are favoring growth of natural gas power plants, particularly in the US, Russia, and Germany. Only 2% of utilities are actively growing coal, and that’s dominated by Chinese utilities, followed by India and Vietnam.

The majority of companies prioritizing green energy are in Europe.

Utilities’ continued investment in fossil fuels leaves them at risk of stranded assets — where power plants will need to be retired early — and undermines global efforts to tackle climate change.

The UK government has raised the 5p charge on plastic bags in England to 10p, which will be effective from April 2021. It will be extended to all retailers in order to curb plastic waste pollution.

The Department for Environment, Food and Rural Affairs (DEFRA) said that the 5p charge has been “hugely successful” since it was introduced in 2015. Major supermarkets have reported a 95% drop in plastic bag sales.

To date, only retailers employing 250 or more staff have had to impose the 5p charge, but from April 2021, all retailers in England will have to comply with the 10p levy.

We have all seen the devastating impact plastic bags have on the oceans and on precious marine wildlife, which is why we are taking bold and ambitious action to tackle this issue head on.

The UK is already a world leader in this global effort, and our carrier bag charge has been hugely successful in taking billions of harmful plastic bags out of circulation. But we want to go further by extending this to all retailers so we can continue to cut unnecessary waste and build back greener.

I hope our pioneering track record on single-use plastics will inspire many more countries to follow suit, so we can take on plastic waste together and implement lasting change.

From October, a ban on plastic straws, stirrers and cotton buds will be implemented by DEFRA.

The average person in England now buys four bags a year from supermarkets, compared with 140 in 2014, government statistics show.