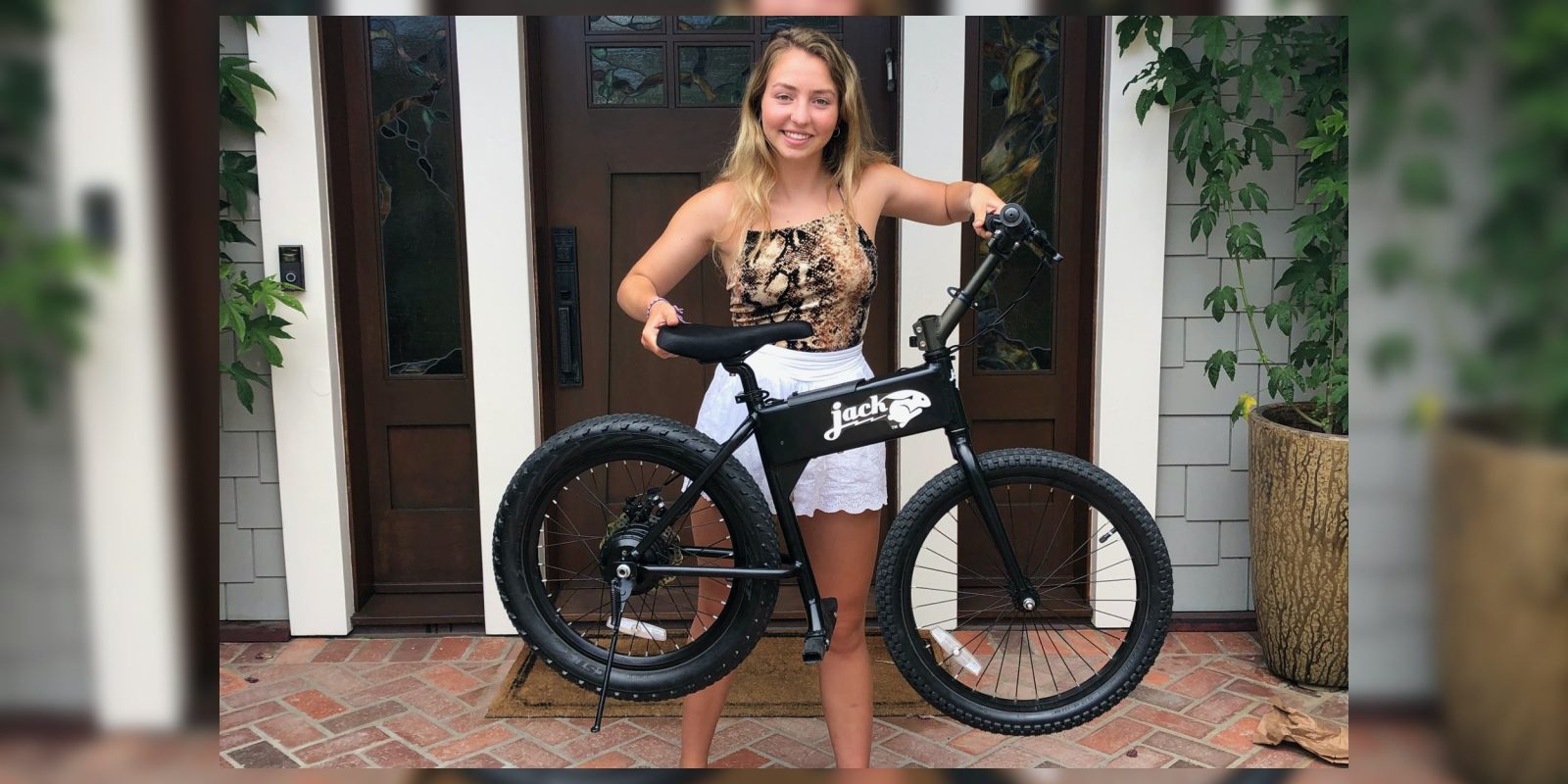 One of the things that I love about the electric bicycle industry is that there is so much room for innovation and creative design. And the JackRabbit 2.0 might be one of the best examples of out-of-the-box e-bike design I’ve seen in a long time. And boy, does it give me a chuckle too!

Referred to by the company as a “mini e-bike”, the JackRabbit 2.0 lacks functional pedals and instead opts for folding foot pegs, thus making it technically more of a seated electric scooter.

Whatever you want to call it, there’s no doubt that it’s going to draw looks wherever it goes.

The JackRabbit 2.0 was designed to incorporate the best advantages of both electric scooters and electric bicycles. I’m not sure it managed to snag the aesthetics of either, but at least its odd design does serve a purpose.

After a successful Kickstarter brought the JackRabbit 1.0 to life two years ago, the company is back with a number of design improvements.

Compared to most scooters, the JackRabbit 2.0 sports large 20″ wheels. Yet compared to most e-bikes, it also sports an ultralight weight of just 23 lb (10.4 kg).

The JackRabbit 2.0 features a 300W continuous-rated hub motor that can propel the bike up to 20 mph (32 km/h). The bike actually pushes a peak 336W from the 158 Wh battery comprised of 21700 cells. That’s not face-melting speed or power by any stretch of the imagination, but is better than most electric scooters or bikes in this price range.

The company claims that testing shows the battery is good for between 9 to 18 miles (14.5 to 29 km) of range, with an average of around 12 miles (20 km). So this obviously isn’t a long range commuter. Rather, the JackRabbit is designed for utility and short trips. Its lightweight and compact design make it easy to lift and stowaway like a scooter.

Part of the comical look comes from a mismatch of proportions. The rear wheel sports a fat tire for a better ride, while the front wheel rocks a narrower tire to reduce weight. The wheelbase is dramatically shortened, which results in a turning radius of just 33 inches (84 cm) – narrow enough to pull a U-ey in a hallway.

And despite the jarring look, the JackRabbit 2.0 actually seems to offer some decent features. I spy a disc brake, a folding handlebar/foot pegs that makes the bike just 7″ (18 cm) wide when folded, USB charger and a lockable/removable battery hidden in the frame.

The JackRabbit 2.0 carries an MSRP of $999. But thanks to the current Kickstarter crowdfunding campaign, pre-orders are going for a 50% discount at just $499. The company expects delivery to occur in December of this year.

As always, we advise caution with any crowdfunding campaign since you are essentially backing a project and not directly buying a product.

In this case, the company has run a successful campaign before and so is likely a safer bet than a brand new startup.

In terms of the vehicle, this is definitely a bike (or scooter?) for someone that doesn’t get all bent out of shape about what other people think about them. I’d say there’s a minimum level of healthy self-confidence required to scoot around on this thing.

While it does look silly though, I can see the utility. Those folding handlebars and foot pegs mean you can stick this thing up against a wall and take up only 7″ of space – that’s pretty awesome for the narrow spaces that many of us live and work in.

And for that pre-order price of $499, this seems like a great deal for a 20 mph (32 km/h) bike/scooter-thing that can easily hit commuter-level speeds.

I do wonder how well it handles at high speeds due to that short wheelbase, but the riders in the videos seem to be doing just fine (see below).

I’m looking forward to testing the JackRabbit 2.0 out at some point before I can give it any kind of real recommendation. In the meantime though, I applaud the team for the out-of-the-box thinking and thank them for a good chuckle – something we could probably all use right now.