A decade after the introduction of its Leaf compact EV, Nissan tonight officially unveiled the Ariya electric SUV. The Ariya promises to shake up the EV market with an attractive all-electric crossover providing up to 300 miles on a charge — with a base model starting at $40,000. Unfortunately, it doesn’t go on sale until well into 2021.

The Ariya will be available in front-wheel and all-wheel-drive configurations. Two different battery sizes will be offered: 63kWh and 87kWh. Given the Ariya’s relatively small size — a C segment vehicle a little shorter than a Nissan Rogue — the bigger battery version stands a chance of hitting the 300-mile mark. (The Ariya is about 4 inches shorter than the Tesla Model Y.)

The Ariya demonstrates our commitment to meeting customer demand for crossovers with the most advanced electrified, automated, and connected technologies.

The company expects sales of its EVs and e-POWER electrified models to be more than 1 million units a year by the end of fiscal 2023. The Ariya will play a significant role in attaining that goal.

Sales of the Nissan Ariya start in Japan in mid-2021. The new Nissan EV will arrive in the US “a little more than a year from now,” according to a company spokesperson. The company declined to comment about targeted US sales volume but confirmed that the Ariya would be sold in all 50 states. 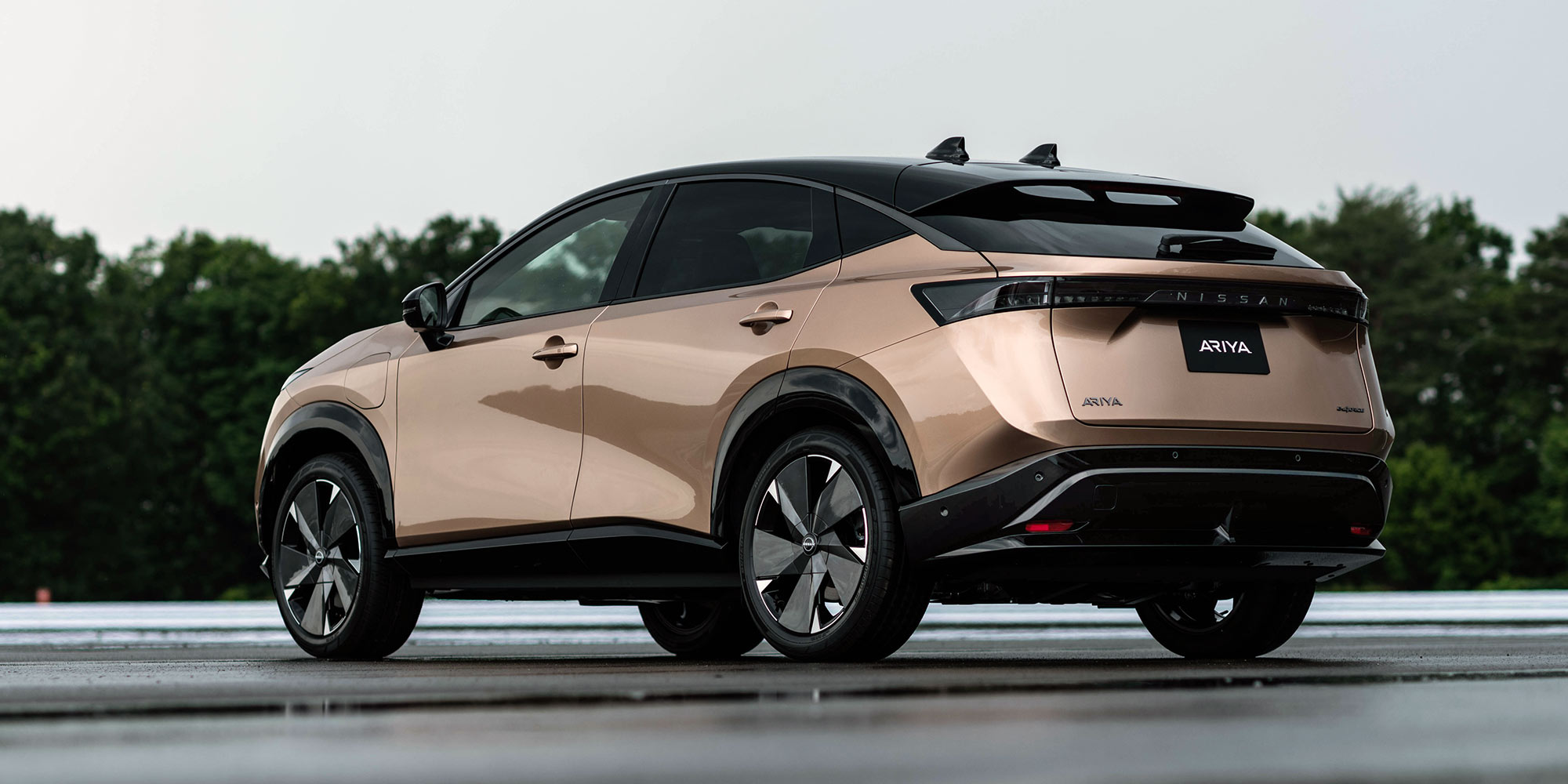 Nissan finally made the jump from the Leaf’s active air-cooled system to a liquid-cooled technical design. In a roundtable media event before the unveiling, Makoto Fukada, the Ariya’s chief product specialist, suggested that the decision was primarily about speeding up the charging times for road trips. Fukada said:

The customer feedback from Leaf users was about how long it takes to go 500 to 800 kilometers (300 to 500 miles), including charging time. That’s the metric.

In simulation, we can go 800 kilometers in 8 hours, including a charging. This is the kind of performance we targeted and why we designed this new EV platform.

In other words, the single pit stop on a 500-mile trip needs to be fast and the battery needs to stay cool. The company will offer the North American and European versions of the Ariya with 130-kilowatt DC quick charging — using the CCS standard. Nissan said it could add 175 miles of driving range in 30 minutes. The battery cells, using an NMC chemistry, will come from CATL. Nissan also moved away from the Leaf’s pouch cell packaging to prismatic canned cells.

The move to CCS from Nissan will be a big blow to the Chademo standard in the US and Europe.

Level 2 charging will be limited to 7.2 kilowatts. Fukada dismissed the notion that 7.2 kW is not as fast as it could be. He suggested that most drivers charge overnight anyhow, so that rate would get the job done.

The charging port will be on the passenger side of the vehicle. In Japan, the Ariya will use the CHAdeMO standard with the port for DC quick charging on one side and Level 2 on the other.

This is a completely new segment. And we wanted to not just do another C-segment SUV. We wanted to capture that futuristic element of an electric platform — the shorter front overhang, elevated height, and commanding view of the road.

It captures a robust sleekness. Obviously, aerodynamics is very important to achieve the range.

We wanted to capture a powerful energy that the drivetrain enables and clean, powerful surfaces.

The design moves AC and heating functions under the hood. There’s no frunk. To maximize interior space, there’s also no center console. Contoured seats give rear passengers and a clear view of the front, also conveying a sense of space.

Nissan promises that the Ariya will have “vast amounts of legroom and easy interaction between front- and rear-seat passengers.” The company describes the cabin as “quiet, allowing occupants to relax and enjoy the stress-free, lounge-like space.” The executives emphasized that the relaxed, airy cabin made sense for use with Nissan ProPilot.

Here are the Ariya’s high-level specs.

Nissan is years behind in introducing its second mass-market EV. But the company appears to have taken the many lessons from the past few years and made a lot of great decisions. The Ariya is a crossover, the hot segment in the marketplace. At $40,000, it’s priced to sell.

The longer-range model will cost more but it’s smart to offer a 300-ish-mile-range version with solid quick charging.

At last, Nissan switched over to liquid cooling and the CCS standard. Those are two more solid decisions that customers have been clamoring for.

We wish the Ariya were coming out this year instead of a year from now. By that time, the competition from VW, Volvo, Ford, and GM will be fierce — not to mention, of course, the Tesla Model Y which has been reaching customers in quantity for a few quarters now.