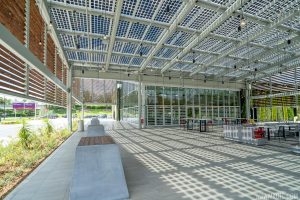 McDonald’s has completed construction of a restaurant at Walt Disney World in Florida that will create enough green energy to cover 100% of its energy needs on a net annual basis, reports Business Green.

The new restaurant will be used as a testing site for reducing energy and water use solutions.

The restaurant also wants to educate diners with stationary bikes that generate electricity and can charge your phone, and green energy games on tablets, but that will have to wait.

The restaurant is now open for take-out, drive-thru, and delivery service with social distancing measures in place.

McDonald’s has set a target to reduce emissions from its restaurants and offices by 36% by 2030.

While health and safety in our restaurants is our top priority, we must also remain focused on creating positive change for our communities and the planet. This restaurant marks an important step in McDonald’s’ journey to reduce our carbon footprint and identify meaningful solutions in the fight against climate change.

The UK’s National Grid and Denmark’s Energinet has begun work on the world’s longest subsea power cable. The €2 billion Viking Link project, a 475-mile (765 km) cable, is being built in Lincolnshire. It will run between the UK and Denmark in order to share green energy between the two countries.

By 2023, the high-voltage, direct-current link will transmit the equivalent of enough electricity to power 1.5 million British homes between Bicker Fen in Lincolnshire and the South Jutland region in Denmark.

The Viking Link will be longer than the 450-mile North Sea link, which will import hydropower from Norway to the UK from 2021. But the subsea power cable system works both ways: When the UK generates too much green power, it will be exported via the subsea power cables to its partner countries.

The UK currently has about 5GW of power cable capacity that connects the UK’s electricity system to power in France, the Netherlands, and the Republic of Ireland. By 2025, this capacity is expected to rise to 25GW. The UK will also connect to Germany and Belgium.

The city of Houston has issued a Request for Information (RFI) for a “community-wide strategy for publicly accessible electric vehicle support equipment and city-owned fleets,” according to Patch. Houston recently released a Climate Action Plan, and this RFI for electric vehicles is one of the first key steps of that plan.

Houston currently powers 92% of its city properties with mostly wind and some solar.

As outlined in the Climate Action Plan, vehicle electrification can help clean our air and improve our climate resilience. We are looking for partners with innovative solutions to help make electric vehicles more available and affordable for all Houstonians.