EGEB: The City of Sydney is now on 100% renewable energy

The City of Sydney, the central borough of the larger metropolis of Sydney, Australia, is now entirely powered by green energy. It’s sourced from one wind farm and two solar farms in New South Wales via electricity retailer Flow Power, as of last week. The City is home to around 250,000 people.

All the City’s operations, including street lights, swimming pools, council buildings, and even the historic Sydney Town Hall, will run off entirely renewable sources. This is the biggest green energy deal in Australia’s history, with a value of over AUD$60 million [USD$40 million] overall.

Cities are responsible for 70% of greenhouse gas emissions worldwide, so it is critical that we take effective and evidence-based climate actions.

We are in the middle of a climate emergency. If we are to reduce emissions and grow the green power sector, all levels of government must urgently transition to renewable energy.

Duke Energy Corp has a net zero by 2050 goal in accordance with the Paris Accords. However, the reason for killing the pipeline is not environmental; it’s because of legal uncertainty driving up costs. Recent public guidance of project cost has increased to $8 billion from the original estimate of $4.5 to $5 billion.

According to the Charlotte Business Journal:

Duke and Dominion specifically cite the April decision by a federal judge in Montana that vacated a key water permit for the controversial Keystone XL pipeline issued by the US Army Corps of Engineers.

We regret that we will be unable to complete the Atlantic Coast Pipeline. For almost six years we have worked diligently and invested billions of dollars to complete the project and deliver the much-needed infrastructure to our customers and communities.

This announcement reflects the increasing legal uncertainty that overhangs large-scale energy and industrial infrastructure development in the United States. Until these issues are resolved, the ability to satisfy the country’s energy needs will be significantly challenged.

Duke Energy states on its website that it will “continue advancing its ambitious clean energy goals without the Atlantic Coast Pipeline (ACP) by investing in renewables, battery storage, energy efficiency programs, and grid projects.” 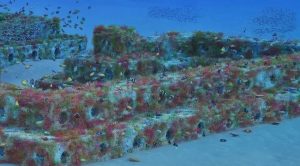 Offshore wind turbines need protection against strong tides. But many of the concrete defenses used to protect them often need to be removed, recycled, or thrown away. They contain plastics and are considered to be marine litter.

So UK startup ARC Marine‘s reef cubes have been developed as a more sustainable alternative. The cubes are made from recycled aggregate and sand that is a byproduct of the quarrying industry.

The cubes interlock, leaving larger living spaces for fish, crabs, and lobsters, and their porous surface is designed to allow marine plants to establish easily and grow. The aim is for these alternative reefs to protect vital offshore installations from storms and erosion while also encouraging marine biodiversity.

Reef cubes are designed to be left in place even after a farm has been decommissioned.

Since 70% of coral reefs are under threat, this is a pretty great solution.