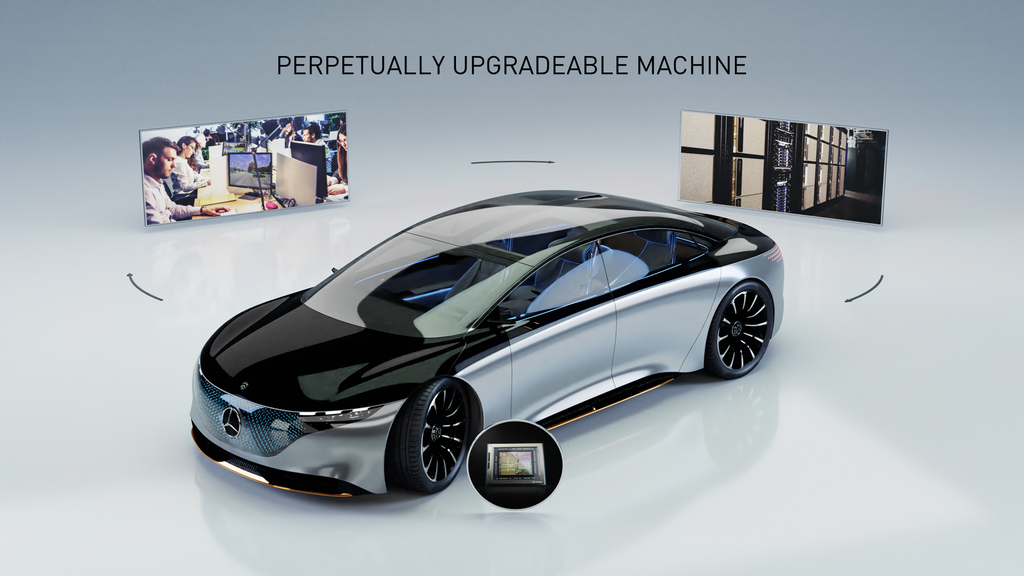 Mercedes will use a full NVIDIA software and hardware system for their vehicles to power self-driving, with the first cars hitting the road in 2024.

The system will be based on NVIDIA’s Orin chip, which they claim outperforms Tesla’s FSD computer by ~38%.

Mercedes and NVIDIA announced a partnership way back in 2017, but today gave us a little more information about when that partnership will bear fruit.

NVIDIA’s system will be available to all Mercedes next-gen vehicles, though it won’t necessarily roll out to all vehicle lines at the same time. But all cars will come with the hardware built-in, regardless of whether or not they are ordered with self-driving options installed. This sounds similar to Tesla’s current model of including Autopilot hardware on all cars, then selling full self-driving as a software option.

The companies emphasized that next-gen vehicles will be “software-defined” with continuous upgradeability – also similar to Tesla.

Another aspect of the “software-defined” car will be the presence of “apps,” much like on a phone.  Some apps may be free and some may be paid (perhaps with subscription models), but this will be a way for owners to customize their driving experience and for cars to lengthen their usable life by getting new features after release. We don’t know if there will be an API for third-party developers or if the apps will be provided by NVIDIA and Mercedes.

NVIDIA and Mercedes claim that this will be built on their DRIVE AGX Orin platform, but we wouldn’t be surprised if that gets upgraded before 2024. Computer hardware moves fast, and the Orin will likely look outdated four whole years from now.

While NVIDIA claims Orin is capable of up to level 5 autonomous driving (a car functioning with no driver present in the vehicle), Mercedes only plans to take the system up to level 2 or 3 (human driver still in the seat actively monitoring), with level 4 parking capability (geofenced fully autonomous operation, with human override available).

Traditional auto manufacturers have had increasing difficulty with in-car software in recent years, as phone manufacturers have rocketed ahead with infotainment systems that are far more usable than traditional in-car systems. 97% of new cars in the US come equipped with Apple CarPlay, and most drivers use that and rarely touch their car’s default infotainment system. And Tesla has been doing over-the-air updates for their in-car systems for many years now.

NVIDIA isn’t particularly known for its software, rather its hardware, but a Silicon Valley company will likely have an easier time harnessing software expertise than the world’s oldest auto manufacturer.

But the industry is moving quickly and 2024 is a long way out. This shows one of the difficulties that the traditional manufacturers have had – the standard car model’s life cycle is ~7 years long, give or take, and vehicles can start to feel very dated in that amount of time. And NVIDIA’s partnership with Mercedes started in 2017 and is taking seven years to go from that to delivering a vehicle to the road.

We can imagine the auto industry will look a lot different in 2024 than it does now, which means Mercedes is aiming at a moving target here. If they’re looking to compete with today’s technology in 2024, they’ll be behind.

This is why a “software-defined vehicle” is important because software iterates a lot faster than hardware, which will help Mercedes hit that moving target. This mentality shift could be crucial for Mercedes-Benz in a rapidly shifting technological environment.