We went to the Petersen Museum in Los Angeles to check out the Tesla Cybertruck prototype, which gave us probably the closest look at the electric pickup truck yet.

Earlier this week, we reported on Tesla loaning their Cybertruck prototype to the Petersen Automotive Museum for their reopening.

They called it the Cybertruck’s “first stationary public display” and since the electric pickup hasn’t been out much, it turned out to probably be the best look at the prototype yet — at least with good lighting.

I went to the museum this morning with a few Electrek readers to check out the prototype since I hadn’t seen it in person yet.

They were quite a few people there waiting in line for the museum to open so they could take a look at the controversial prototype in person:

I was also excited to see the truck in person and see how it affects my opinion.

Like many other people, I was skeptical when it was first unveiled, but I have warmed up to the Cybertruck over time.

I am happy to report that I appreciate the design even more now that I’ve seen it in person:

It is a large vehicle, but it doesn’t feel as imposing as it did in pictures.

Tesla CEO Elon Musk has been talking about making the Cybertruck 3-5% smaller, but he recently announced that they scrapped that plan, and now it sounds like it will be the same size as the prototype, which is 231.7 inches long, 79.8 inches wide, and 75 inches tall.

I particularly like the look from front angles like pictured above, but the Cybertruck looks strange to me from the rear:

The steel finish is impressive, but it does catch the light weirdly at times, making it look like some body panels are glossier than others with their sharp edges.

You could also clearly see that they have been polishing it for display, but I don’t think that will be a big problem for owners.

The wheels and tires were not as crazy in person as they looked to me in pictures:

They are still massive, but you can see that it’s a regular wheel with an aero wheel cap and a rugged tire.

The wheel wells are also fully enclosed and you can’t see the suspension at all: 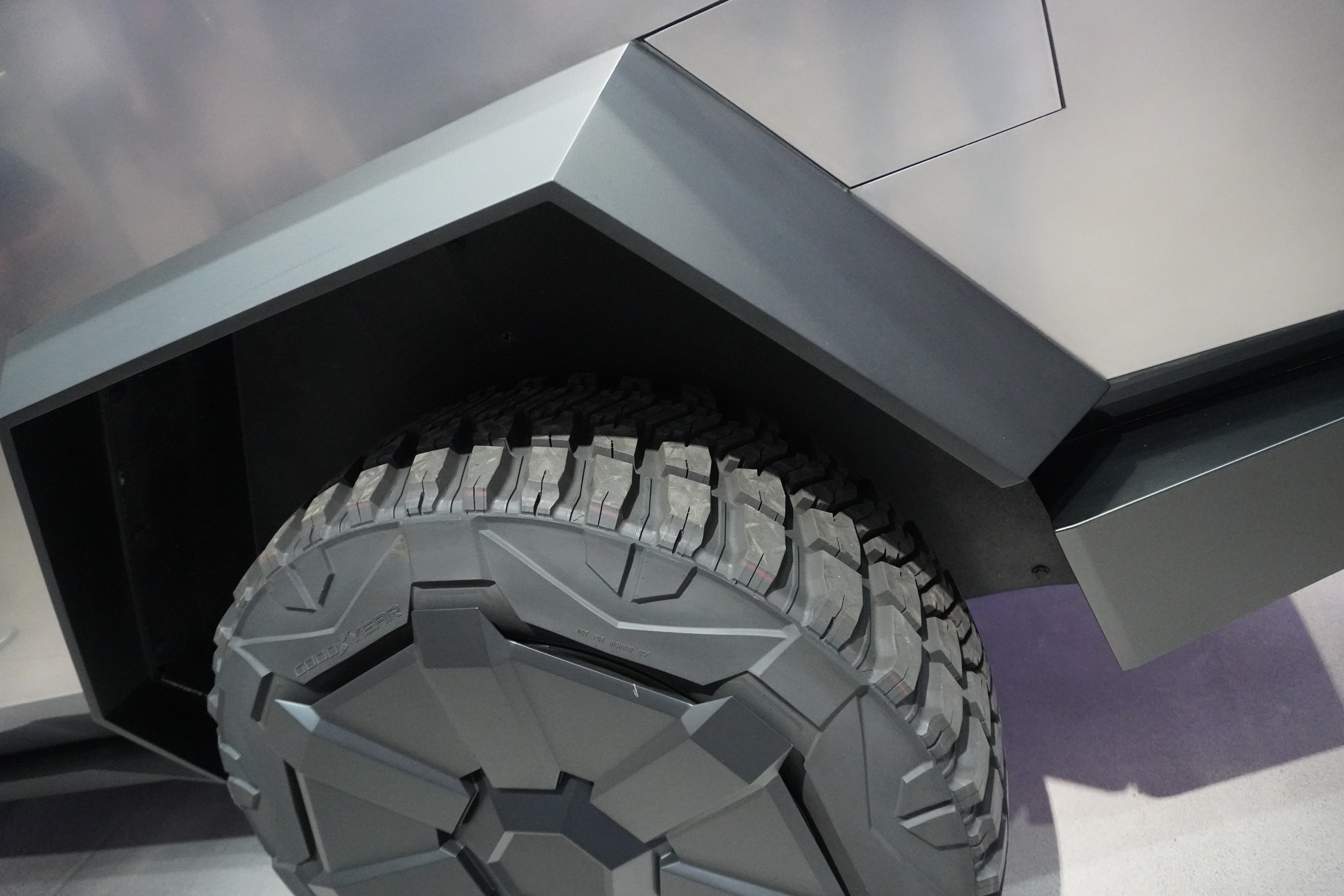 Speaking of looking underneath the Cybertruck, it was roped off so we couldn’t get a good look at the bottom, but here’s the best I could do: 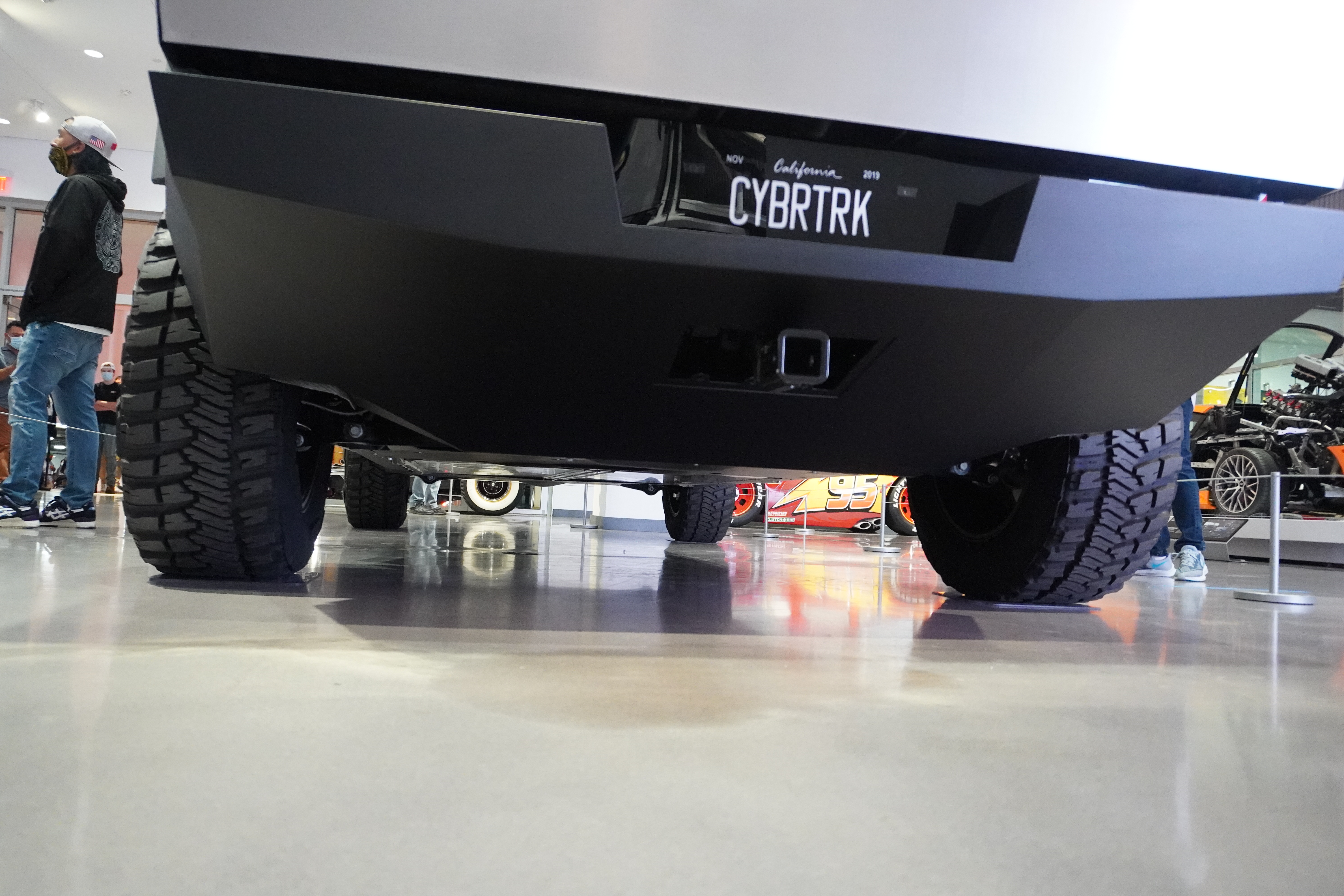 We also couldn’t get inside, but the interior looked like what they unveiled last year:

The Cybertruck’s center display appears to be different than the one found in Model 3 and Model Y.

It appears thicker on the edges, which are also more square like the recent iPads: 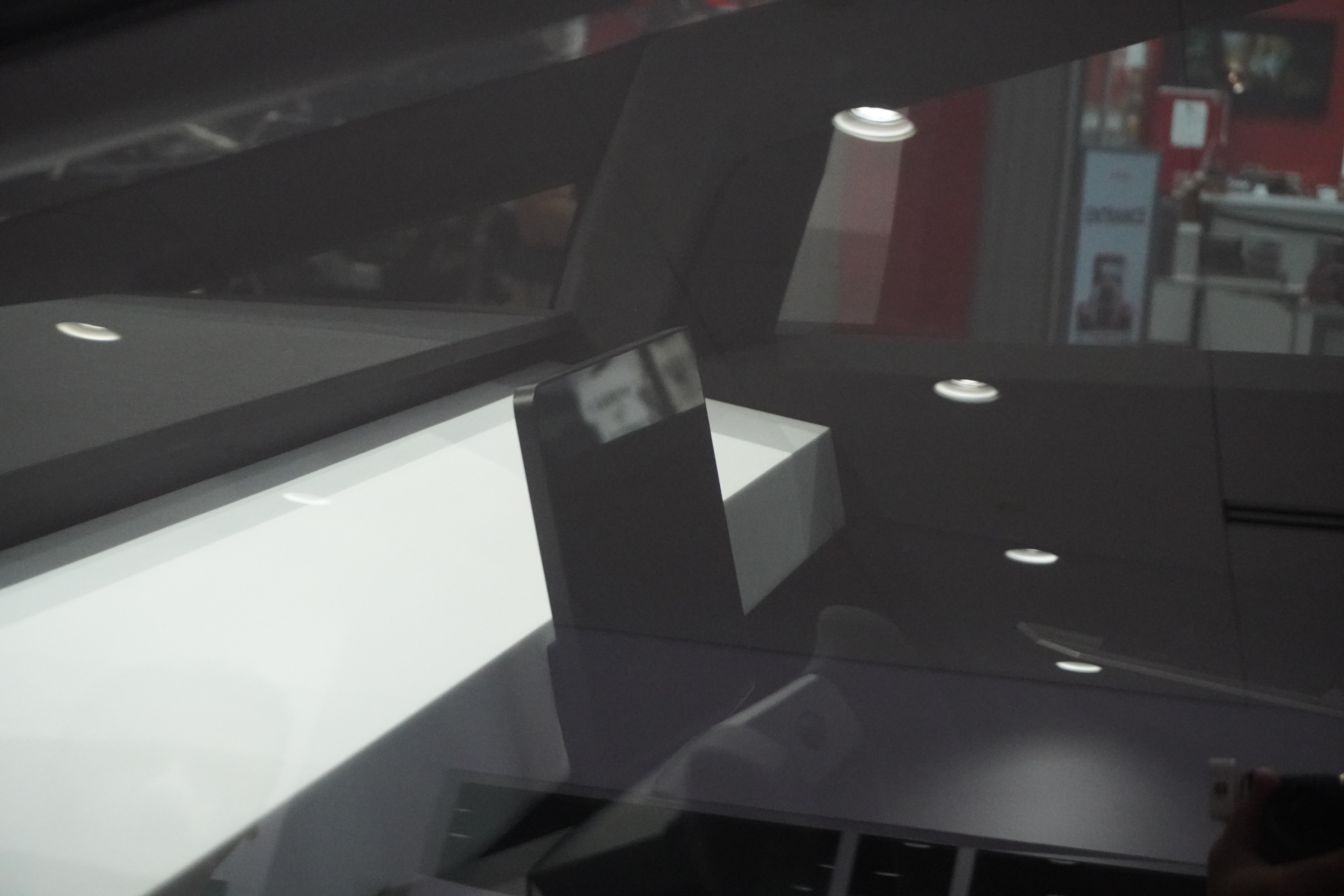 We could also see the side cameras, which are expected to be used like the repeaters on the current vehicles and for side views inside the car if they ended going through with the design without side mirrors:

It’s not currently legal on US roads, but there’s an effort to change that and cameras and screens can replace mirrors in other markets, like in Europe.

Interestingly, the B-pillars didn’t have cameras like in the current Autopilot sensor suite in production on other Tesla vehicles: 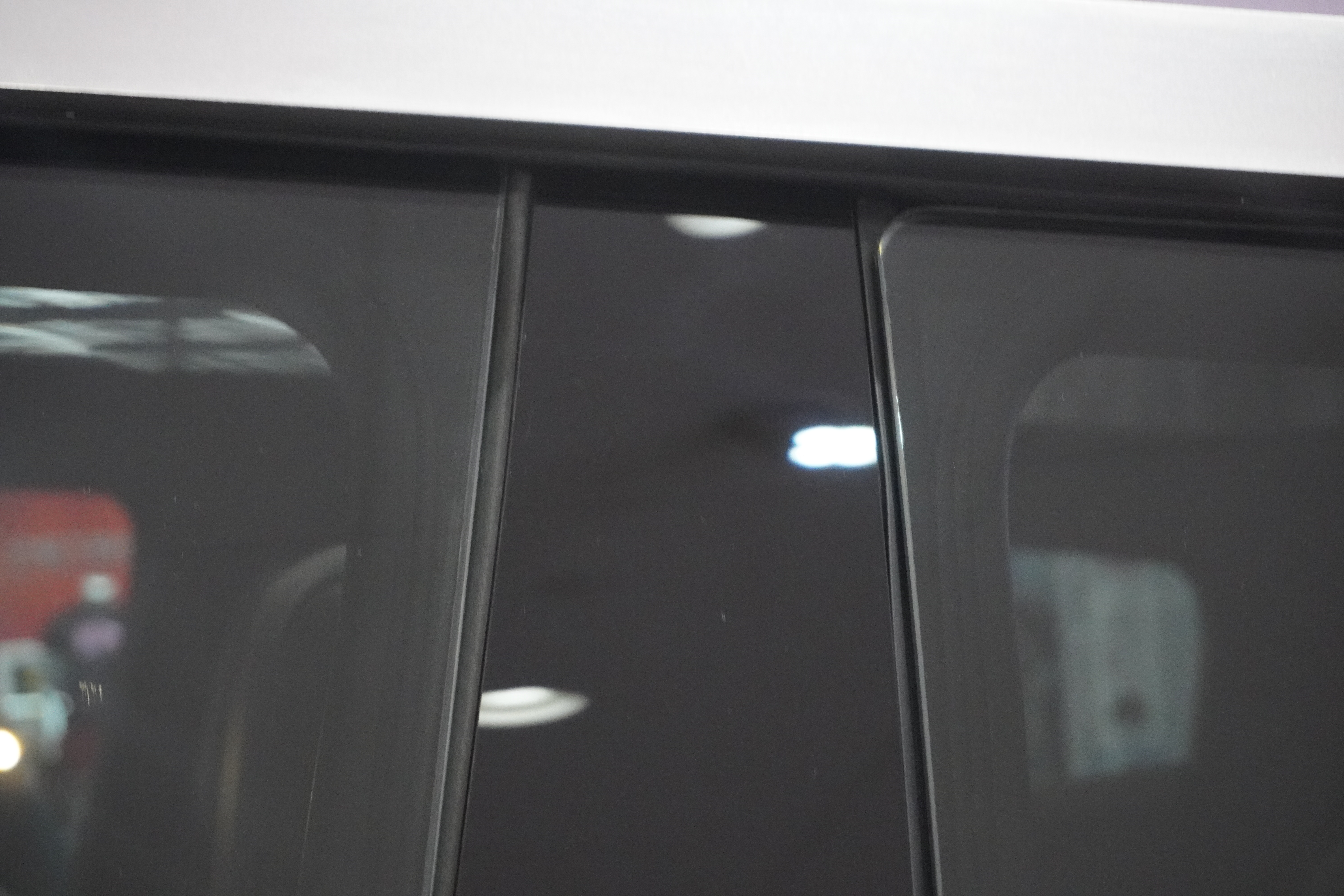 Maybe they will introduce that in the production version, or they might think that they can only rely on the side cameras.

Also, here’s a picture of the Tesla Cybertruck’s charge port: 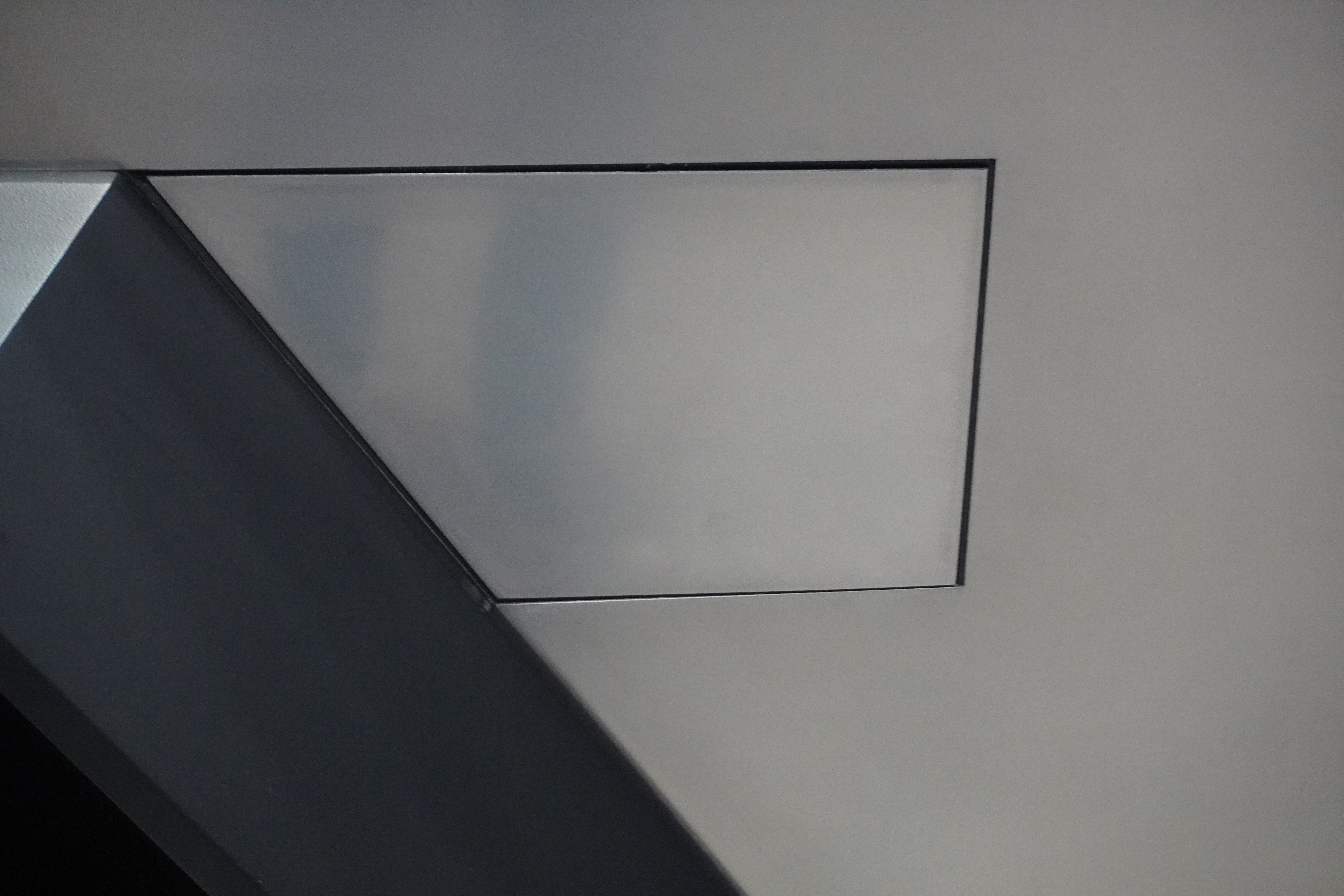 It really sticks out because of the steel body and the lack of taillights extending to the sides.

In other Tesla vehicles, the automaker has been able to integrate the charge port to the taillight trim to blend it into the body.

Here are a few more pictures (thanks to Scott Buscemi for some of the pics):

Big thanks to Tesla for making the Cybertruck prototype available for the public to see. It was fun to get out, talk to some people (thanks to the Electrek readers who came out), and see the truck.

I even wore my Cybertruck Broken Glass shirt for the event:

The Tesla Cybertruck at the Petersen Musuem pic.twitter.com/qz2071IpGo

In short, I really liked the design in person. It didn’t look too big to me, but it was in a large room, which can affect your perception.

There were a few details that didn’t look right, but they are likely to iron this out by the time it reaches production.

I am especially interested to see what will happen to the steering wheel and those side mirrors, or lack thereof.