In what feels like a story straight out of science fiction, a team of engineers is currently building an electric monowheel motorcycle to set a Guinness World Record. The electric monowheel, known as the EV360, is essentially one large-diameter hubless wheel with the driver seated inside to operate the controls.

The Duke University team, which counts among its members former Tesla and Audi engineers and current SpaceX and Neuralink engineers, had already been approved for a world record attempt this spring, but their attempt was delayed due to the COVID-19 pandemic.

Now in the meantime, they are sharing their progress on the EV360 project with Electrek, and you’ll definitely want to see their electric monowheel.

In fact, check out the video below to see it in action.

The team has evolved over time but currently consists of Anuj Thakkar, Carlo Lindner, Ahmed Ahmed-Fouad, and Fran Romano.

Team leader and test rider Anuj described to Electrek how they designed and built the electric monowheel.

The electric monowheel motorcycle was built for speed, not for distance, and thus sports a rather small 72V 22Ah lithium polymer battery with 1.58 kWh of capacity. The team estimates that the battery should be sufficient for around 9 miles (14.5 km) of range when riding at 20 mph (32 km/h).

The current world record for fastest monowheel is held by a gas-powered monowheel that hit 72.9 mph (117 km/h). The Guinness World Record page for the previous successful record attempt contains this humorous note:

“One major challenge for monowheel riders is avoiding a “gerbil incident” – that is, accidentally looping around with the outer wheel instead of remaining seated at the base of the vehicle.” 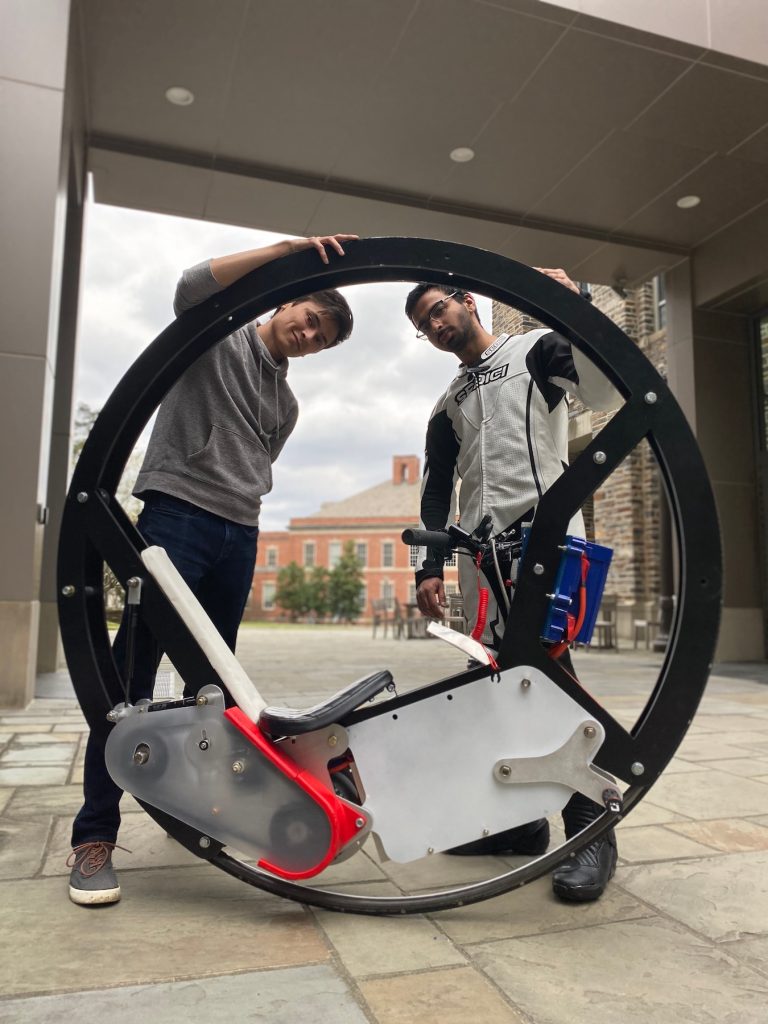 When the team first shared with me a few photos of their electric monowheel, the basic stop and go functions seemed to make sense. I could see the standard throttle and disc brake setup that is actually fairly similar to many e-bikes and electric motorcycles.

But for the life of me, I couldn’t figure out how they steer the thing. As it turns out, they don’t really steer it, at least not with their hands in the traditional sense.

At low speeds (<15 mph), the primary mode of steering is using your feet to softly drag or tap alongside the vehicle to adjust orientation, much like sails on a sailboat can use wind drag to adjust the orientation of the boat. At higher speeds, leaning allow small changes in vehicle direction, but the radius of steer is often so small it’s difficult to say the rider has nearly any control of the vehicle at all. I generally trust that once I hit about 20-25 mph, the vehicle has its own direction that I have to trust it will maintain. With the entire vehicle making about 1 square inch of contact with surface on the ground, there isn’t much to work with for steering and stability.

Though to be fair, it’s not like they are expecting to head out on the open road with the vehicle anytime soon. And I’d be lying if I said I didn’t also build and then pilot crazy things as an engineering student myself. So I can certainly see the draw.

Were we to make this a vehicle with commercial viability, we would certainly integrate a self-stabilizing gyro mechanism that could be used to support steering and stability; otherwise, the vehicle is too dangerous to be taken with general traffic.

So far the monowheel has crashed around 15 times but there have been no injuries. A major part of the project has been not just learning how to build an electric monowheel, but also how to make it functional.

We started the monowheel project as a way to apply the skills we gained in classes to a novel and challenging problem, and to build our practical experience. There is no handbook for how to build a monowheel; it calls for a lot of creativity, and that’s been a great way for us to learn.

While this likely won’t be my next electric ride, I’d be more than happy to give it the ol’ college try if the team ever lets me. Until then, we’ll just have to watch from the stands and root the team on while they make a run for the record books with their electric monowheel motorcycle.