Tesla (TSLA) has become the world’s most valuable automaker – surpassing Toyota – as its stock pushes to a new high at $1,000 a share.

As its stock price rose, the California-based automaker has been rapidly climbing the ranks of the most valuable automakers in the last few years.

It’s hard to directly compare Tesla to other automakers because the company is more than an automaker due to its growing energy division and its tech-like approach to the automotive business.

But most of its revenue currently comes from selling cars, which mostly makes the company an “automaker” on a market capitalization standpoint.

In 2018, Tesla had a surge in stock price that made it more valuable than several major automakers, but it was short-lived after a difficult year on the stock market for the electric automaker.

Now Tesla’s stock (TSLA) has been on another run since late last year and today, the stock hit another high of over $1,000 per share.

It raised Tesla’s market valuation to over $180 billion – surpassing Toyota to become wold’s most valuable automaker (via Top 25 Automakers by Market Cap by u/brandude87): 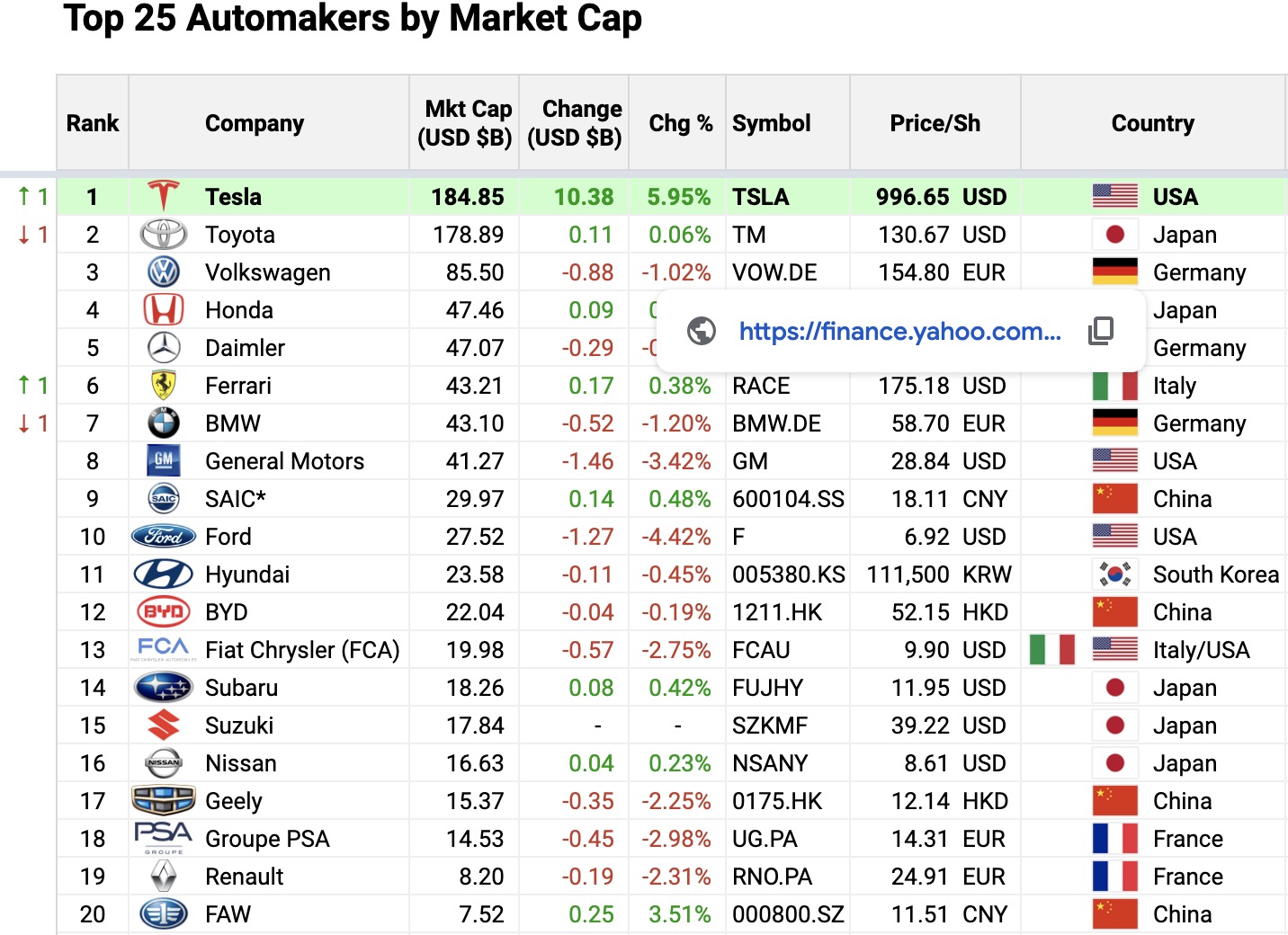 To be fair, Tesla didn’t just achieve that through its own performance but also declines in valuation from virtually all other automakers.

Toyota lost 7% of its value since the start of the year.

The Japanese automaker lost as much as 20% of its value during the global pandemic, but it has still recovered most of that loss.

Ironically, Toyota used to own a big chunk of Tesla.

In 2010, Toyota invested $50 million in Tesla and they brokered a heavily discounted sale of the Nummi factory, which is now Tesla’s Fremont factory.

The automaker sold its stake in Tesla for a good profit back in 2017, but it was still only a fraction of what it would be worth today.

I am long TSLA and I am glad to see the market recognize that it is a successful growing company, but I think it’s getting a bit out of control – like the rest of the stock market.

There are millions of people without jobs and Tesla is showing clear signs of weak demand in virtually every market except in Asia.

I am still confident about Tesla’s longterm prospect, but this quarter is going to be a rough one and yet, Tesla’s stock is hitting new highs. It’s weird.

Apparently, I am not the only thinking that since it was just a month ago when Elon said the stock was too high and it was trading at $760 a share back then.