Converting all cars and SUVs in the Greater Toronto area into electric vehicles would cause 313 fewer deaths per year, an estimated social benefit of $2.4 billion. That’s the high-level finding of a study published today by Environmental Defence and the Ontario Public Health Association.

Marianne Hatzopoulou, the University of Toronto civil engineering professor who led research on the new study, “Clearing the Air,” said:

Local air pollution within urban environments is highly detrimental to human health. When you have an electric vehicle with no tailpipe emissions, you’re removing a wide range of contaminants — from nitrogen oxides to fine particulate matter — from the near-road environment and shifting them to power plants. The net effect remains a large improvement in air quality.

The study predicted reductions in emissions for various air pollutants using epidemiological data on pollutant exposures. Health Canada estimates that 14,600 premature deaths per year can be attributed to air pollution, with more than 3,000 of them in the Greater Toronto Hamilton Area (GTHA).

I was surprised just how strong the effect was. If you bring it down to an individual level, each electric vehicle replacing a gas-powered one brings nearly $10,000 in social benefits. Those benefits are shared by everyone, not just the people buying the cars. 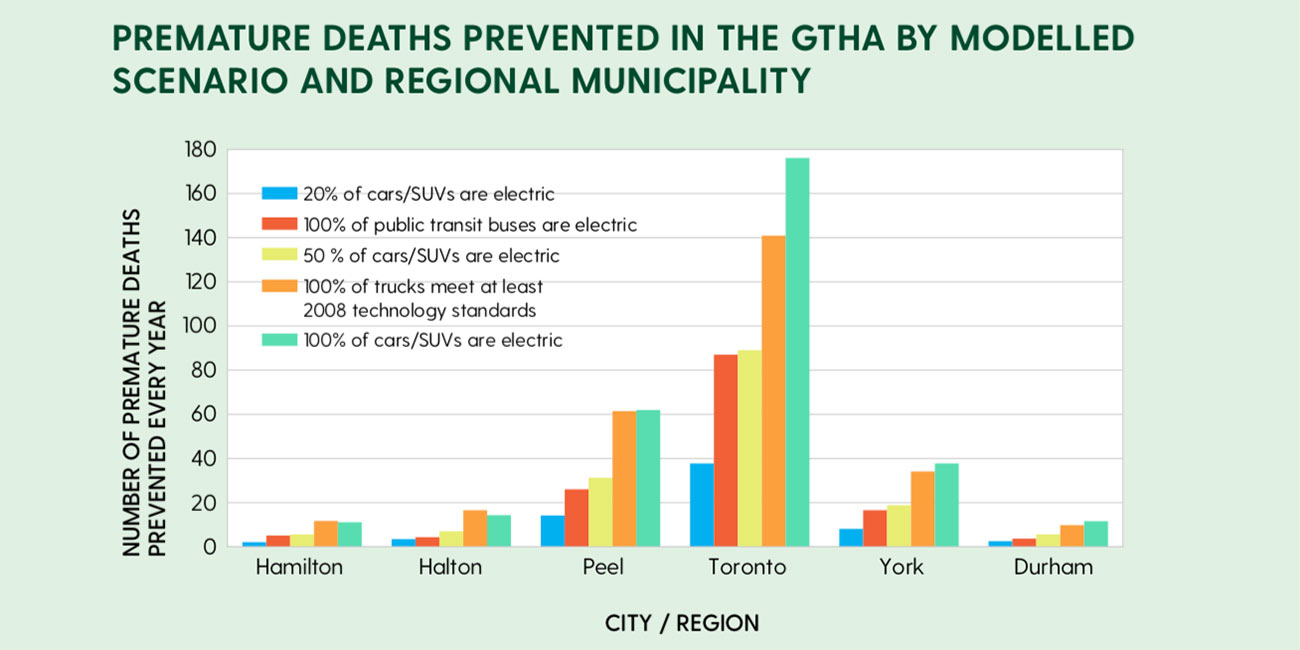 Hatzopoulou explained that simulation models can pinpoint air quality down to one square kilometer. The study took into account increased emissions at utility plants due to EVs charging, as well as air pollution drifting to Toronto from upstate New York and the American Midwest.

The researchers then created computer simulations for three scenarios, replacing 20%, 50%, or 100% of all cars and SUVs in the GTHA to EV. They also modeled the effect of switching transit buses to electric buses. The economic or societal benefits were converted to dollar figures using a method called Value of Statistical Life.

Here are the high-level findings:

The Canadian study looks at Greater Toronto-Hamilton as just one metropolitan area. Similar life-saving health benefits could apply to nearly every city in the world.

The researchers point out that the Canadian federal government now offers electric vehicle purchase incentives of $5,000. But they call for the adoption of clean vehicles to accelerate via multiple measures, including zero-emission vehicle sales mandates, higher purchase incentives, and more significant investments in EV charging infrastructure.

Based on the study’s findings, those measures and investments would bring much bigger returns in health and societal benefits.