SF Weekly, the Bay Area’s muckraking newspaper, today published an exposé about poor health and work conditions at Tesla’s Fremont plant. One Tesla factory worker said, “This is a life and death situation.” Another worker, who refused to return to work, said, “It’s a modern-day sweatshop.” Unfortunately, we’ve heard similarly harsh words from Tesla non-unionized employees, who helped build the company into a major success.

Carlos Gabriel, the worker who refused to return because social distancing is not being observed, said:

There’s really no room, and this is a factory with recycled air. You’re basically just breathing on each other.

Another employee who reached out to Electrek last week corroborated the report from SF Weekly. He described a meeting held a full week before Tesla was given the go-ahead from Alameda County.

We were inches apart from one another. Didn’t look like they made any changes to the line. On the line, we sometimes work on top of each other, touching the same equipment.

They give us a mask and take our temps when we walk in. The bathrooms aren’t always clean and are small. 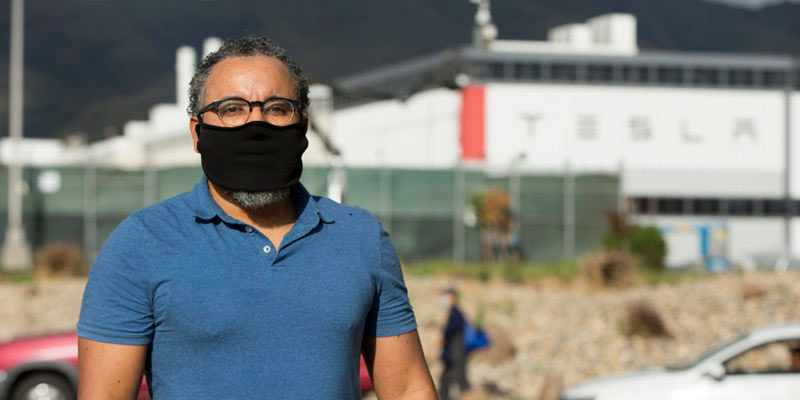 The worker who contacted Electrek added, “Unions have been trying to get in for years with no luck.” He said that everybody knows that “Elon wouldn’t allow it.” SF Weekly noted that Tesla is the only non-unionized workforce of any major [American] car company in the US.

In March, another employee who also wanted to remain anonymous informed Electrek about conditions at the plant when it was formally shut down.

I arrived at work this morning. We are still running full production. Does not look like they cut down on the workforce. They give us a mask and take our temperature when we walk in. They are not practicing safe social distance.

The Tesla CEO sent a message to his workers on May 12, thanking them for returning to work after the factory was re-opened. He wrote:

Just wanted to send you a note of appreciation for working hard to make Tesla successful. It is so cool seeing the factory come back to life and you are making it happen!

An honest day’s work spent building products or providing services of use to others is extremely honorable. I have vastly more respect for someone who takes pride in doing a good job, whatever the profession, than some rich or famous person who does nothing useful.

Some employees expressed support for Musk in return. They are part of the so-called Unmasking movement resisting the lockdown protocols. Those workers are sympathetic to the “back to work” sentiments expressed by Musk and Donald Trump. Some employees also “remove their masks in order to breathe after hours of physical labor,” according to SF Weekly.

Tesla continues to call more employees back to work. Nonetheless, the company warns that employees who don’t come back to work might lose unemployment benefits.

A set of site-specific pandemic safety guidelines were created on May 12 via meetings between Alameda county and Tesla officials. The guidelines called for changes to the breakroom, temperature screenings, and having employees dispersed throughout the plant.

We are well-prepared to proceed safely and in alignment with all government precautions and the county’s requested safety measures.

However, SF Weekly reports that workers say the measures outlined in the HR memo and Return to Work playbook are “not being implemented consistently on the Fremont factory floor, where plant management is still fumbling to establish safety guidelines on the fly.”

They’re trying to implement the changes while everyone’s working. It makes you wonder if your life is worth 20 bucks an hour.

Employees said that that by last Thursday, a 20-minute grace period between shifts was shortened to 10 minutes. The number of employees involved in a shift change can number more than 1,000 people. Some shifts begin as early as 5 a.m.

A 61-year-old assembly line employee named Art, who only shared his first name, said that he and his colleagues work “shoulder to shoulder,” with no room for 6 feet of distance.

Fremont police have made a few brief appearances to verify whether social distancing measures are enforced. However, a spokesperson from the Fremont Police Department said, “We would simply not have the capacity to do [inspections] for every business in Fremont, as we have thousands.”

Gabriel told SF Weekly that he believes Musk has been looking at moving the factory from the Bay Area for months. He said the plant, which employs 10,000 people, is one of the last suppliers of blue-collar jobs in the area, but that Tesla management doesn’t see itself as part of the community. “We are disposable to [Tesla],” said Gabriel.