In new comment, the Alameda county seems to have deescalated the issue around Tesla reopening its Fremont factory despite the county’s order as CEO Elon Musk set an obvious martyr trap.

As we reported yesterday, Tesla went ahead with the reopening of Fremont factory despite a local order from the Alameda County to wait until they approved a safe reopening plan.

CEO Elon Musk said that he would himself be on the production lines and he asked that if Alameda County were to enforce the rules and arrest anyone, it should be him:

“Tesla is restarting production today against Alameda County rules. I will be on the line with everyone else. If anyone is arrested, I ask that it only be me.”

But the county didn’t fall for the martyr trap set by Musk and didn’t go into Fremont factory to put anyone in handcuffs.

County officials claim to have been in continuous contact with Tesla last week to approve the automaker’s plan to reopen the factory by May 18, but Musk apparently wanted to do it sooner – leading to Tesla filling a lawsuit and stalling the talks.

The Sheriff’s Office instead issued a statement stating that they are aware Tesla is breaking the order and they will take the same action that they do for other businesses who have been violating the order: 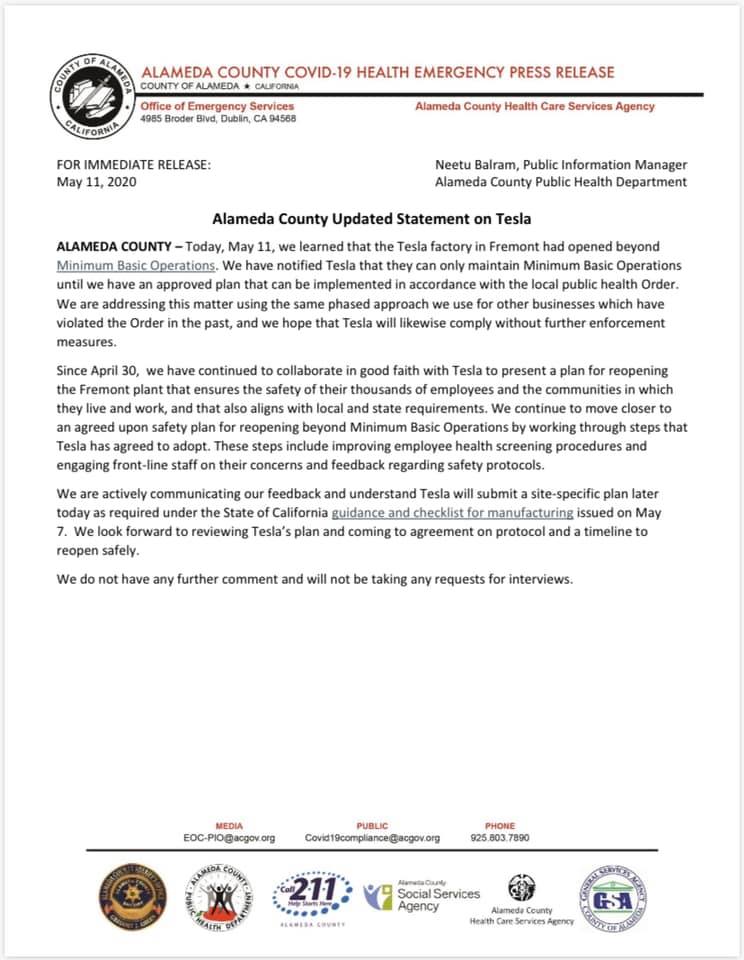 They plan to review another official plan for Tesla to reopen under the manufacturing guidelines released by the county last week.

At this point, it’s not clear what consequence if any Tesla will see for reopening before this plan was approved.

Some of Tesla and Musk’s main arguments for reopening early is that automakers in other states have been allowed to restart production and they believe that they can operate the factory safely due to their experience running Shanghai Gigafactory in China post-pandemic.

While I do believe in Tesla’s ability to reopen Fremont safely following their “getting back to work” post, I have to say that Alameda County is sounding a lot more reasonable with Elon here.

It sounds like the county was aiming to approve Tesla’s plan to reopen on May 18, but Elon and Tesla couldn’t wait one more week.

I understand the frustration, but no one is above the law. Then he goes on to set this martyr trap to be the one to get arrested. Come on.

Elon has been saying weird things to justify his moves lately.

As for other automakers, most will begin opening on May 18th.

GM recently announced the majority of its North American plants would restart production on May 18. GM said production at its factories would resume in stages, starting with one shift of workers and expanding to two or three shifts as needed.

For example, the CEO has been weirdly framing the reaction of Scott Haggerty, the county supervisor for the district in Alameda County, being threatened with a lawsuit:

Haggerty actually admitted to NYT that he told his staff to “slow down” Tesla for reasons that had nothing to do with health. Unreal …

Here’s the context of what Elon is talking about from the NYT article: 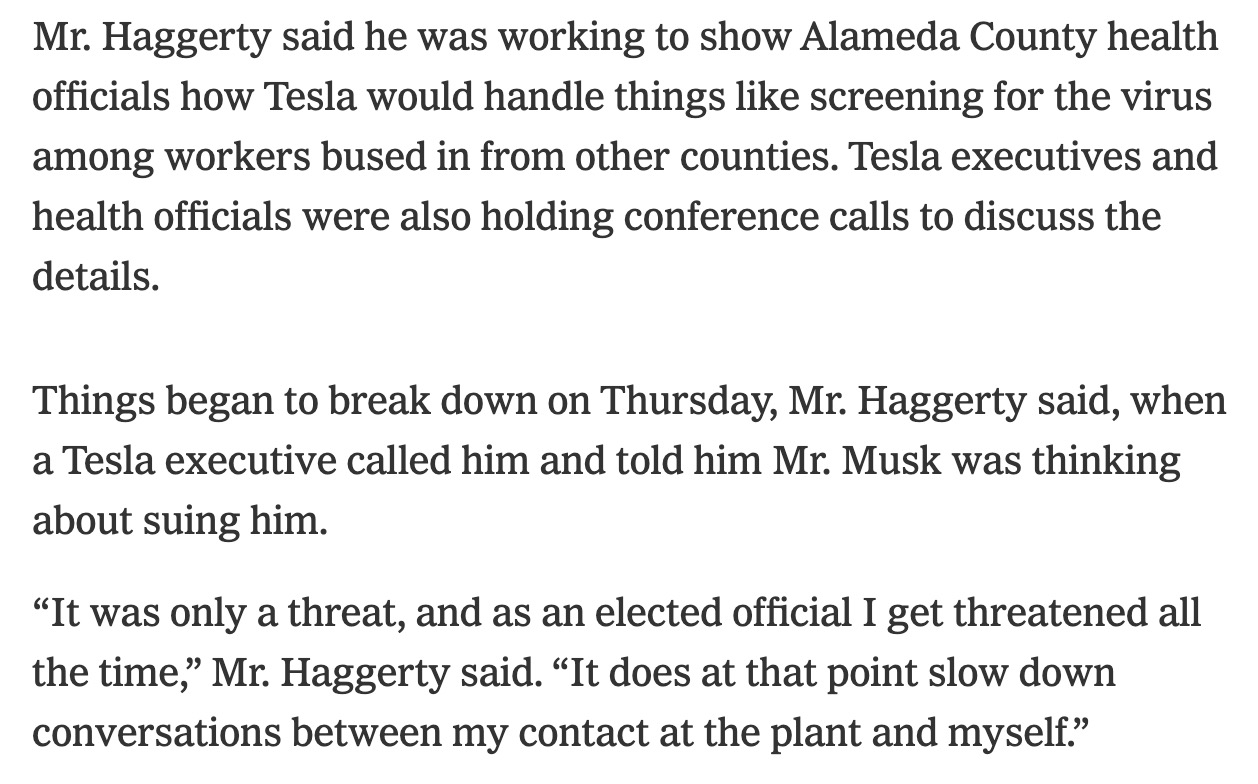 When a party involved in a discussion threatens another party with a lawsuit, of course, it slows down conversations. They now have to be a lot more careful about what they say since they know that it’s all going to be twisted in court by a bunch of lawyers trying to promote their own versions of the truth.

Elon tried to make it sound like a nefarious thing on the supervisor’s part by saying that he intentionally slowed down talks for “non-health reason”.

I want to see the Fremont Factory reopen safely too, but I really don’t like how it is being done.