Tesla, through its research arm in Canada, has published the results of research on Hybrid Lithium-Ion/Lithium Metal Cells, which can be used to create what can be best described as all-electric cars with a range extender.

Typically, when we talk about electric vehicles with a range extender, we are talking about a battery-powered electric car with a small gasoline combustion engine that acts as a generator to recharge the battery when the user wants to have more range.

The BMW i3 Rex is a good example. It was equipped with a battery pack enabling 126 miles (203 km) of all-electric range, which could be extended to 200 miles (320 km) with its combustion engine.

Now in a new paper, Tesla’s battery research group comes up with a similar concept – but it remains all-electric. How?

The research was conducted by Jeff Dahn and his team at the University of Dalhousie in Canada.

As we previously reported, Dahn is a pioneer in Li-Ion battery research and in 2016, he partnered with Tesla who is now financing his research group at the University of Dalhousie under Tesla’s ‘Advanced Battery Research’ division.

For this specific work on hybrid lithium-ion/lithium metal cell research, Dahn works with his students Matthew Genovese, A.J.Louli, Rochelle Weber, and Cameron Martin. The last two have roles directly at the automaker.

In the paper, which was published in the science magazine Joule last month, they describe a new type of battery cell that takes advantage of both the longevity of Li-Ion cells and the high energy density of lithium metal cells:

“Increasing the energy density of batteries will decrease the cost of electric vehicles and enable longer driving ranges. Replacing the graphite anode in conventional lithium-ion cells with lithium metal significantly increases energy density. However, lithium metal anodes are plagued with rapid capacity loss and short cell lifetime. To develop a high energy density cell with longer lifetime, we propose a hybrid lithium-ion/lithium metal cell that is achieved by purposefully plating lithium metal on graphite. Although unwanted lithium plating is normally a degradation mechanism in conventional lithium-ion cells, we achieve reversible lithium plating on graphite with an optimized dual-salt electrolyte. Furthermore, since batteries are often not cycled to 100% of their capacity, these hybrid cells can be operated in lithium-ion mode with little degradation for the majority of their life with periodic fully charged lithium metal cycles for extended capacity.”

Here’s a diagram of the cells: 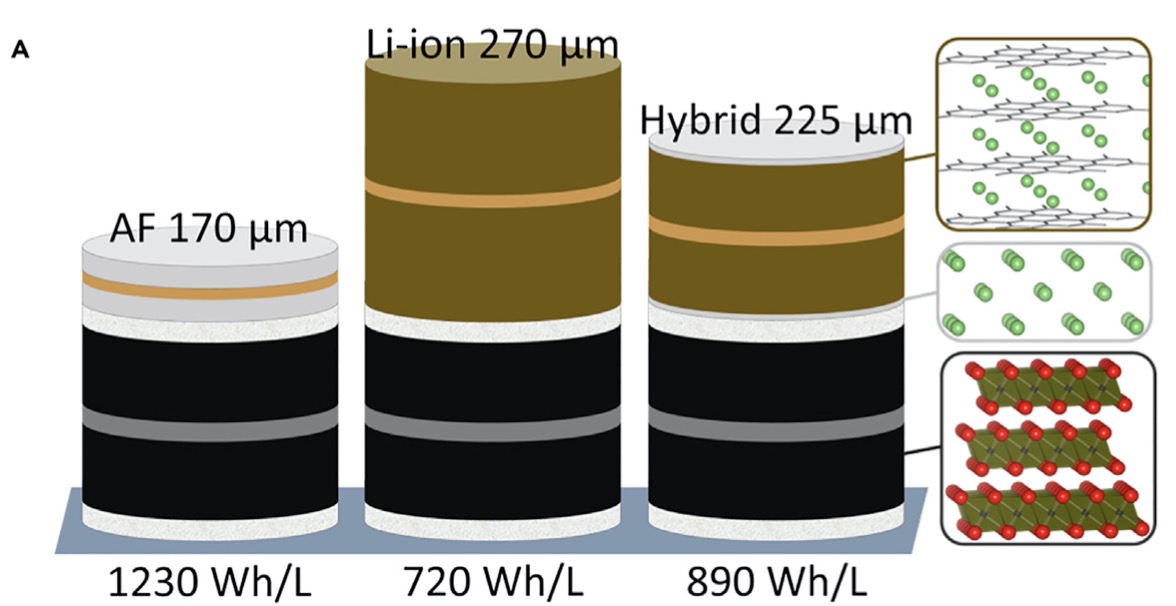 The researchers describe in the paper what it could mean if an electric car was to use this technology:

Now it doesn’t mean that they are quite there yet. The research is still in the early stages and while they have demonstrated some impressive improvement in performance for hybrid cells, it could still be a long way to commercialization.

However, it wouldn’t be the first time that Tesla explores hybrid battery packs since the automaker filed for hybrid Li-Ion/Li Metal battery patents back in 2013.

This could be a real game-changer if it comes to fruition.

Right now, most Tesla drivers, and other long-range electric vehicle owners, are dragging hundreds of pounds of batteries every day that they actually only end up using only a few times a year.

That makes the car less efficient on most of its trips.

Now every time I write about that a bunch of people says that it’s not true because they do a 300-mile trip every week. Sure, there are some exceptions, but we are talking about the majority of people here.

The norm is a relatively short commute every day and the occasional longer trip.

This new battery in an electric car would enable drivers to achieve greater efficiency on their commute while maintaining the longevity of their battery pack and then when they need it, they could cycle the battery as a Li Metal battery and enable a longer range for a road trip.

I think that would only be an option and people would still be able to buy long-range all-electric cars.