EGEB: Wind is now the largest source of electricity in Iowa and Kansas

The American Wind Energy Association says wind is now the largest single source of electricity in Iowa and Kansas. Both states now get more than 40% of their electricity from wind. In both states, wind has surpassed coal.

Texas and Iowa led the US in wind power additions, and South Dakota had the largest percentage growth in 2019, “increasing its installed wind capacity by over 50 percent after installing 506 MW.”

The Des Moines Register points out that “projects in Iowa added the second-most wind power capacity of any state in 2019, behind only Texas.”

The report also says Iowa is second in the nation in total wind industry jobs, with more than 9,000. The state’s total economic investment in wind energy grew by $3 billion to reach $19 billion — also second in the nation. Texas leads both categories.

Coal is dead in Austria

On Friday, Austria shut down its last coal power plant. The country’s largest power provider, Verbund, switched off its coal-fired district heating plant in the southeastern state of Styria, which had provided power to the nearby city of Graz for 34 years.

Austria still has gas and oil plants, but plans to cease fossil-fuel use for energy by 2030. Gas-fired plants will be shut down by the end of this decade, and Austria intends to be on 100% green energy at that point.

Austria is the eighth EU country to stop burning coal. According to PV Magazine, “The country’s installed PV capacity must be increased tenfold over the next 10 years in order to achieve 100% green electricity target by 2030.”

Star map company Under Lucky Stars compared the average Air Quality Index (AQI) from January with March, and the difference between levels of particulate matter are stark in cities that enforced coronavirus lockdown.

The pandemic has devastated economies and lives, but also demonstrates that improvement of air quality is possible if societies shift away from fossil fuels and transport that increase particulate matter levels. (Sydney, Australia, 70%! Wow.) Moscow did not impose lockdown until the end of March, and Dubai did not start its lockdown until the beginning of April, which is why there was no particulate matter drop in those places. 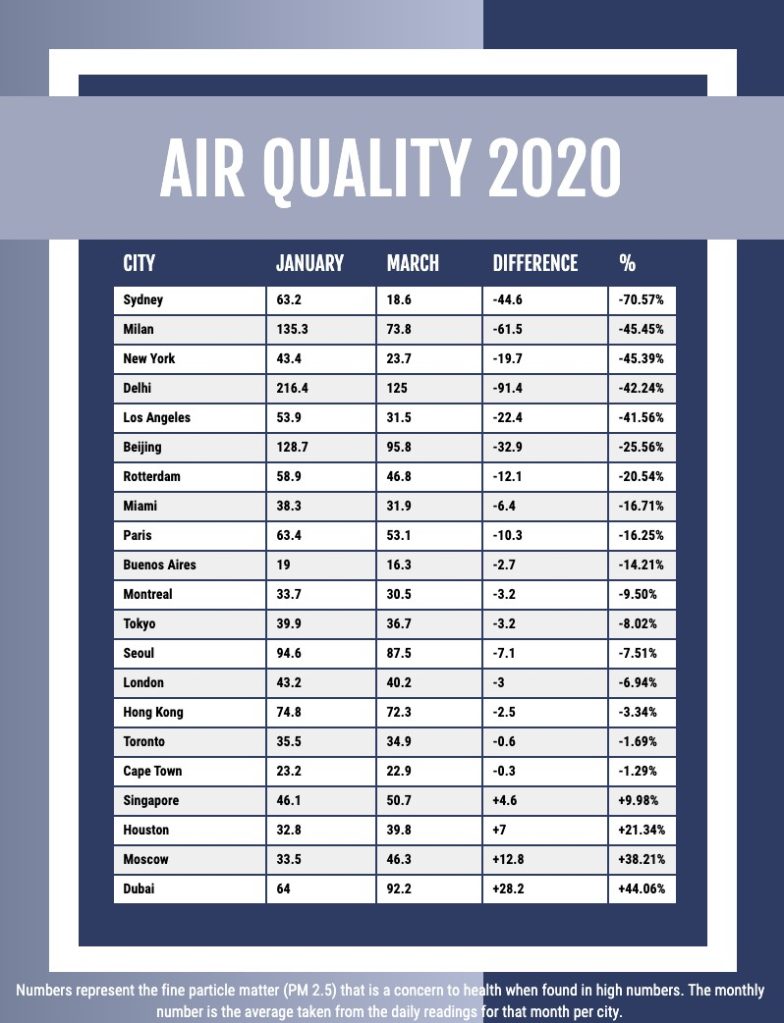