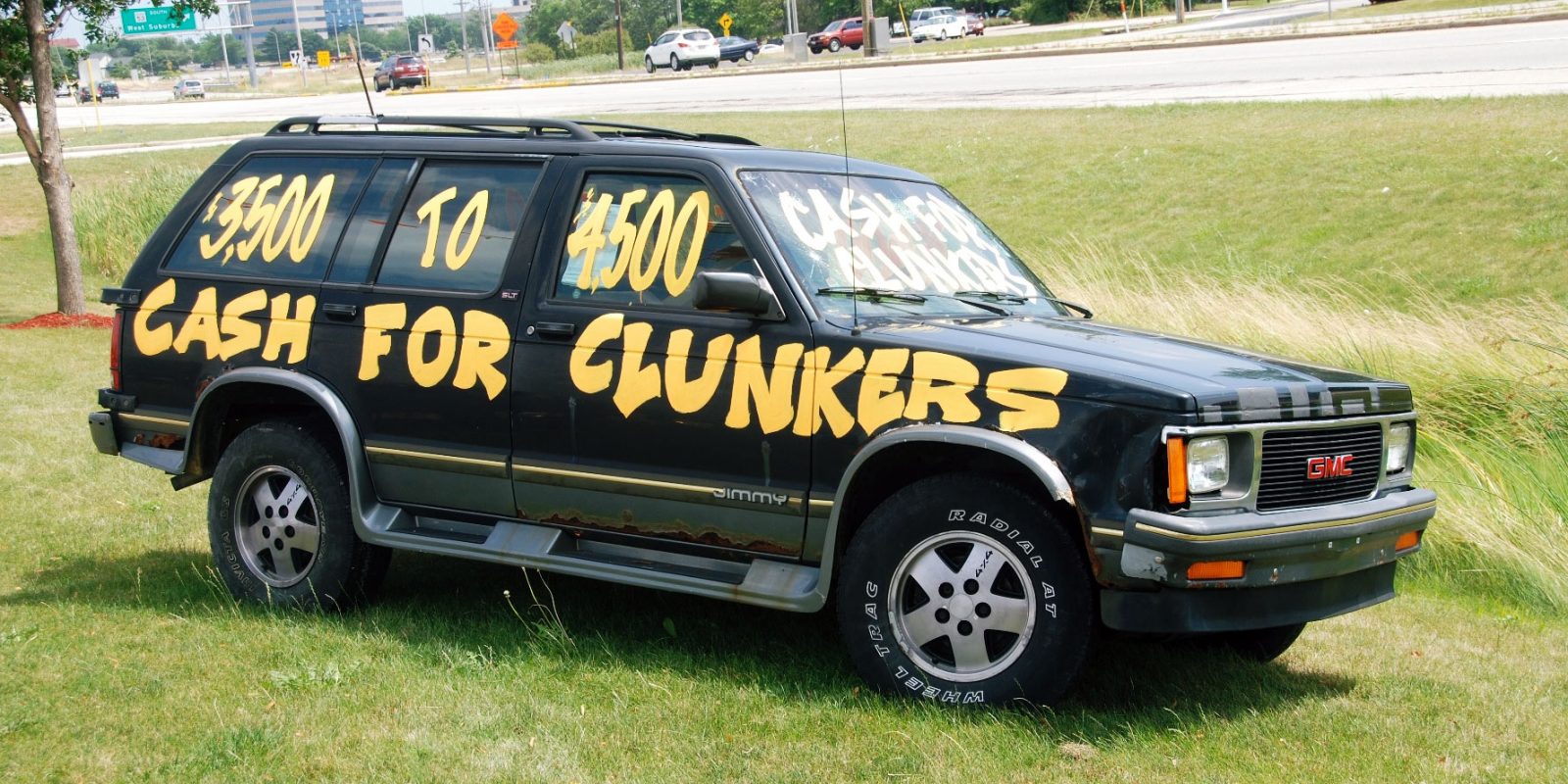 A decade ago, disused clunkers advertised the stimulus program
0

After March auto sales tanked due to the pandemic, Ford today became the first automaker to propose a government stimulus program for the auto industry. One approach would be a “Cash For Clunkers” program based on the 2009 stimulus measure.

In October, Senator Chuck Schumer (D-NY) proposed the very same thing: a plan to help vehicle sales by granting consumers as much as $5,000 to trade in a fuel-thirsty gas car for a low- or zero-emissions vehicle.

We think some level of stimulus somewhere on the other side of this would help not only the auto industry and our dealers, which are a huge part of our overall economy, but will help the customers as well. We’re in discussions about what would be the most appropriate.

Cash For Clunkers was very effective at that time. It would be nice to think we could have something equally as effective for 2020 when we get out of this because it was a great program.

Ford acknowledged that it’s encouraging Congress to look at a variety of ways to increase new car sales, but said that any specific program — such as Cash For Clunkers as one of many approaches — was only being discussed internally at this time.

In October, Senate Minority Leader Schumer proposed a plan that would provide discounts to car shoppers if they trade in a polluting, gas-powered vehicle for an EV. In an op-ed published in the New York Times, Schumer said the goal of his Cash For Clunkers plan would be to ensure that every vehicle on the road has zero emissions by no later than 2040.

After Schumer floated his proposal, Curt Magleby, Ford vice president of US government relations, said the company would work in a bipartisan way to help shape this proposal. Magleby added:

We appreciate Leader Schumer’s efforts to drive America toward a more electrified, low-carbon future. Ford is investing $11.5 billion to grow our electrified vehicle portfolio, which includes iconic models our customers know and love.

If future stimulus efforts include support for vehicle sales, whether through a cash-for-clunkers type program or other means, those efforts should be focused on setting automakers up for long-term success, protecting consumers and reducing emissions.

A program focused on electric vehicle adoption could help consumers save money on fuel while getting automakers on the right path as the global trend moves toward zero-emissions technologies.

Auto sales have plummeted during the pandemic, with automakers reporting their worst sales numbers in a decade. Automakers and suppliers employ roughly 1 million Americans.

A decade ago, Cash For Clunkers successfully stimulated auto sales, although critics said it adversely affected the used car market and lower-income buyers. Schumer’s proposal considers past lessons and remakes the program for the age of long-range, mainstream electric cars.

Considering the current dismal state of auto sales, Ford is unlikely to be the only company advocating for a program to stimulate sales. EVs, which were barely on the market a decade ago, have emerged as a critical technology for the future of auto companies and their workers.

When the auto industry comes to Congress for help this time – whatever form it takes – promoting sales of made-in-America, state-of-the-art, zero-emission vehicles should be an absolute requirement.