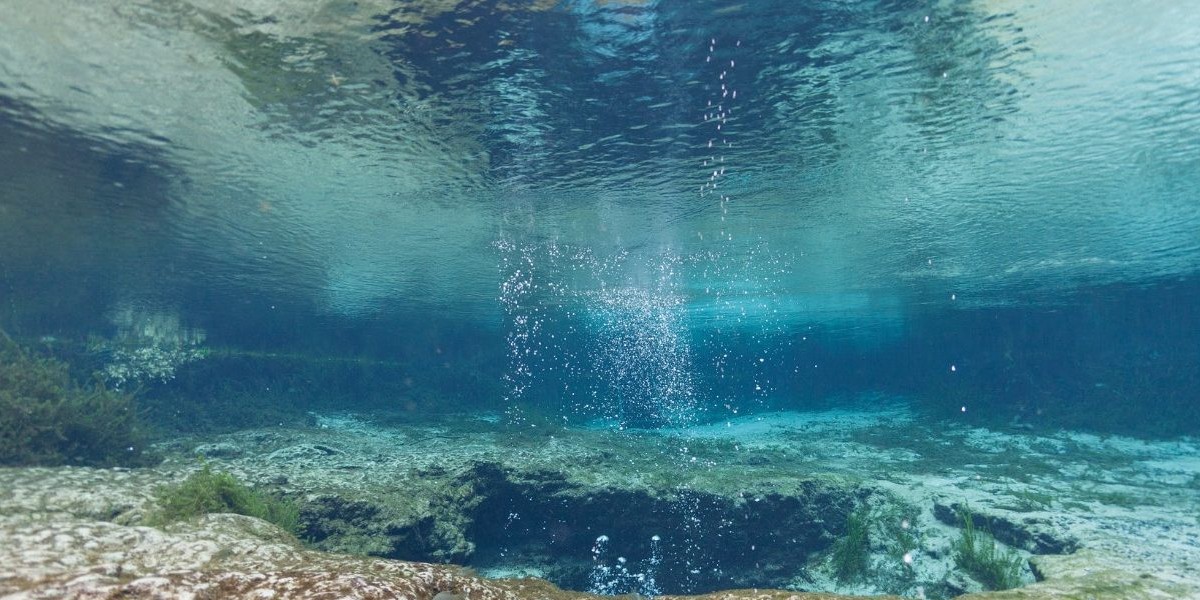 Nestlé, who makes billions of dollars every year selling bottled water, wants to draw out the maximum amount of 1.152 million gallons of water a day from a Florida spring. Today, a bill was filed by a Florida representative that is part of a larger effort by House Democrats to scrutinize bottled water companies.

Ginnie Springs Outdoors is a vast recreational park and campground facility in Florida, northwest of Gainesville, and is on the south side of the Santa Fe River. It consists of seven springs fed by the Santa Fe.

The Wray family, who own the land around Ginnie Springs, has allowed a number of corporations to draw water from the springs and bottle it to sell. An original permit was issued to the local company Seven Springs Bottling Company in 1995 and modified in 1999. The permit allowed for a total of 1.152 million gallons a day, but Seven Springs only drew around one-third of that amount.

Now Seven Springs has a contract with the multinational food giant Nestlé, who wants to draw out the maximum amount. Incredibly, the only money Florida makes for the water — the same water for which Nestlé will make millions — is a single $115 application fee paid by Seven Springs.

If Nestlé draws the more than 1 million gallons, it would be enough to fill about 8.7 million 16.9-ounce bottles of water each day. Nestlé said that figure did not take into account water used for cleaning or in the manufacturing process and for employees to drink.

On March 2, the Suwannee River Water Management District said that they considered Seven Springs’ permit application incomplete and recommended that it be denied. The renewal application does not provide specific information about engineering plans to accommodate all the water it wants to pump. Seven Springs also declined to provide a copy of its contract with Nestlé. Finally, there is not evidence of the physical ability to process the greatly inflated amount of water by Nestlé.

On March 3, Nestlé issued a statement in response, saying:

Nestlé Waters North America (NWNA) is disappointed with the SRWMD staff’s recommendation that the board deny Seven Springs’ permit renewal. The denial recommendation is narrowly focused on issues specifically related to the water purchase agreement and how much water is needed by the facility, NOT on any adverse environmental impacts as a result of the permitted withdrawals.

And then Nestlé and Seven Springs filed an appeal, so now the case will go to a hearing, followed by court proceedings. The judge will submit a recommended order to the District Governing Board for a final agency action.

Nestle and Seven Springs filed an administrative appeal before Suwannee River Water Mgmt District had a chance to vote on the water use permit at Ginnie Springs. The board was expected to deny the permit tomorrow because the water managers considered the application incomplete. https://t.co/0OmApbPbzR

Would Nestlé hurt the springs?

More than 149,000 people who have signed a change.org petition vehemently disagree with Nestlé’s claim that it would provide no adverse environmental impacts. Consequences include:

Deterioration of water quality, lowering the water table reducing residential well water supplies, reduction of water to other streams and lakes in the state, destruction of ecosystems and wetlands, loss of support below soils creating sink holes.

A Florida Springs Institute study shows the Santa Fe River’s flow, which feeds the springs, is down 28% from historical levels due to overpumping.

It makes no sense to be giving away water, a million gallons a day, to an out-of-state bottling company when our own river right here is suffering.

According to Michael Roth, president of Our Santa Fe River, a Fort White-based nonprofit dedicated to springs and aquifer protection, yes, it would hurt the springs. Roth told Electrek:

I do fault the [Suwannee River Water Management District] staff with coming up with three curable objections to the permit while leaving on the table the actual danger to the resource they are supposed to protect and any serious consideration of the public interest.

Environmental Action says Nestlé’s plan threatens “the area’s natural beauty and ecological diversity. Years of overpumping have already scarred this spring and the Sante Fe River, which has seen a precipitous drop in water level and stalled river flow.”

Today, Broward Democratic Representative Debbie Wasserman Schultz announced that she’s filing a bill that would levy a five cents per gallon tax on water that is extracted from springs or groundwater sources. It would result in a significant cost increase for Nestlé. Her bill is part of a larger effort by House Democrats to scrutinize bottled water companies.

For too long, bottling companies have drained Florida’s most precious resource for next to nothing. Florida’s aquifers are the lifeblood of our economy and a recreational staple of our communities. They can’t be treated like a corporate giveaway that has infinite supply any longer.

And Our Santa Fe River’s Roth continued to Electrek:

The laws are designed to protect corporate interest, and this is a clear example. We have a valuable resource that’s being both withdrawn from us and polluted, and trying to stop it is almost impossible because the corporation has every legal avenue available to them.

After months of our appealing to the apparent decision maker this now goes to a sterile courtroom where we will probably have to prove standing just to present the public view. What was the point of all of our appeals these last six months? And that is the way the system is designed.

That having been said, we are not at all surprised at this turn of events, and hopeful that the administrative judge will see that this permit is not reasonable in that it is not necessary, and that it does in fact harm existing users, and it is not at all in the public interest.

So, you may be asking, what does this water issue have to do with climate change and green energy? A lot. Just as we at Electrek cover electric vehicles not only because they’re cool (which they are), we also cover them because they’re good for the environment. And like air, water is also vital for humans to live. A tax may be a deterrent, but it’s still not good enough. This water should not be sold as a consumer good.

The fact that states are literally giving away one of its most precious resources — water — to corporations for their own profit is just beyond insane. States are allowing companies like Nestlé to take our water, not just in Florida, but in other states like Michigan and California, put it in plastic bottles, and sell it back to us.