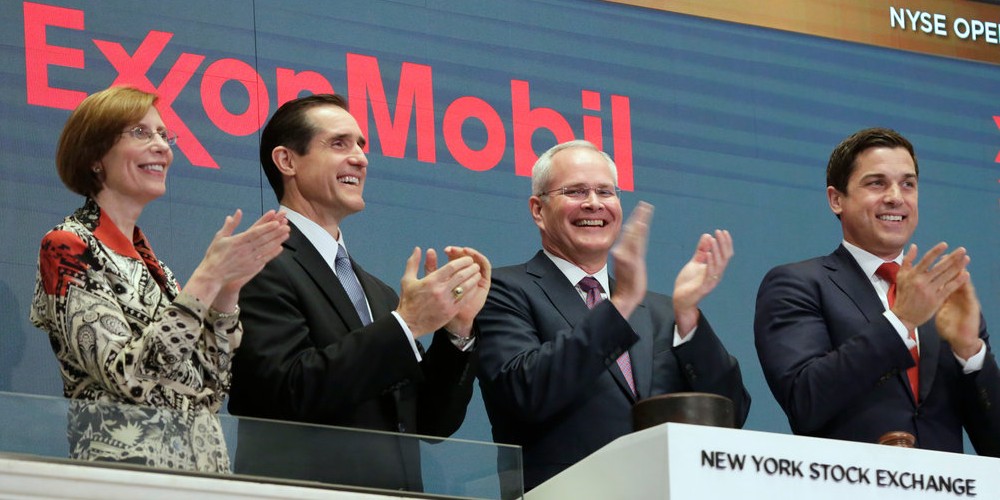 ExxonMobil held its investor day at the New York Stock Exchange (NYSE) yesterday, and its CEO, Darren Woods, dismissed carbon targets as a “beauty match” with other companies.

Woods (pictured behind the podium a couple years ago, above) said ExxonMobil will not be entering into a competition with European companies like BP (UK), which said it would reach net zero from oil and gas it produces by 2050. Shell (British-Dutch) and Equinor (Norway) are also setting targets around Scope 3 emissions, which are indirect emissions that occur in the company’s value chain. Eni (Italy) has pledged to cut its emissions by 80% by 2050 and said its fossil-fuel production will peak in 2025.

In comparison, American Exxon has pledged a 15% reduction in methane emissions between 2016 and 2020, and a 25% cut in flaring waste natural gas, which is the burning at the wellhead of unwanted natural gas, principally methane, an oil extraction byproduct.

Neither Exxon nor Chevron (also American) have set Scope 3 targets. Instead, Exxon is approaching this as an opportunity, not an environmental crisis. The Financial Times reports that Woods said at the NYSE:

We want to ensure that we’re well-positioned for the inevitable upswing as growth in demand outstrips current supply.

Singing off a different hymn sheet

Exxon has plans for $30-$35 billion in capital spending per year for the next five years. Most of its money will go to big oil and gas projects. Exxon seems to be singing off a different hymn sheet, not only from its competitors (except for Chevron), but also investors and, increasingly, banks.

#Exxon CEO has his head buried in the Tar Sands…. https://t.co/EKMSWT7L1m

(Edward Mason is head of responsible investment for the Church of England Commissioners.)

Individual companies hitting targets and then selling assets to another company so that their portfolio has a different carbon intensity has not solved the problem for the world. It hasn’t made a dent in it. And in some cases, if you’re moving to a less effective operator, you’ve actually made the problem worse.

Once the largest company by market value, Exxon has lost allure to investors spooked by declining returns and questions over future demand. Some have pledged to divest from oil and other fossil fuel stocks as worries build over climate change.

Further, the Guardian reported today that ExxonMobil met with European Commission officials to try to get them to compromise on the European Green Deal. The company wants to extend its carbon-pricing scheme to include ICE vehicles.

Green groups believe this would be the least effective way to disincentive fossil fuel vehicles, and would rather allow countries to set their own emissions standards and targets for road emissions.

The move appears to be an attempt to stall the rollout of electric vehicles by keeping a lid on the cost of driving a traditional combustion engine vehicle running on fossil fuels.

Exxon has spent €37.2 million lobbying the EU since 2010, more than any other fossil-fuel company.

Let’s just park, for the moment, the discussion of all the air pollution and damage to the environment fossil fuels do — that’s a given. And regular readers of Electrek know that’s our stance, and it drives our passion for and promotion of electric vehicles. So of course we’re not happy at all with Exxon’s dodging, diving, and covert attempt to thwart the adoption of EVs, which isn’t going to happen anyway, no matter how hard they try.

Let’s put it in Exxon’s context, which is money. It’s always about money. So, if they stay on their current path of justification for refusing to emulate their European counterparts by investing in green energy and steering away from fossil fuels, it’s just financially not smart. Just ask Jim Cramer, who declared fossil fuels “done” on January 31.