Two Tesla owners in two different Model X vehicles going in two different directions were hit by the same falling tree on the road and claim that Autopilot saved their family’s lives by applying the brakes before they could.

The incident happened last weekend in Dorset, in southwest England, where Storm Dennis has been hammering parts of the country with wind and rain.

Laurence Sanderson was driving his Model X with his wife and three kids when a giant oak tree fell in the middle of the road.

He told the Mirror that he saw the tree coming down, but Autopilot applied the brakes before he could:

We were driving along and out of the corner of my eye I saw the tree coming down. The car was on Autopilot and the emergency braking kicked in.

His wife was a little banged up with bruises but otherwise everyone was OK, which is impressive when seeing the aftermath of the accident:

What’s even crazier is that another Tesla Model X electric SUV was driving in the other direction at the same time and was also also damaged by the tree.

Josh Whitelock was in the other Model X with his girlfriend and her mother. All three also came out mostly unharmed from the crash. 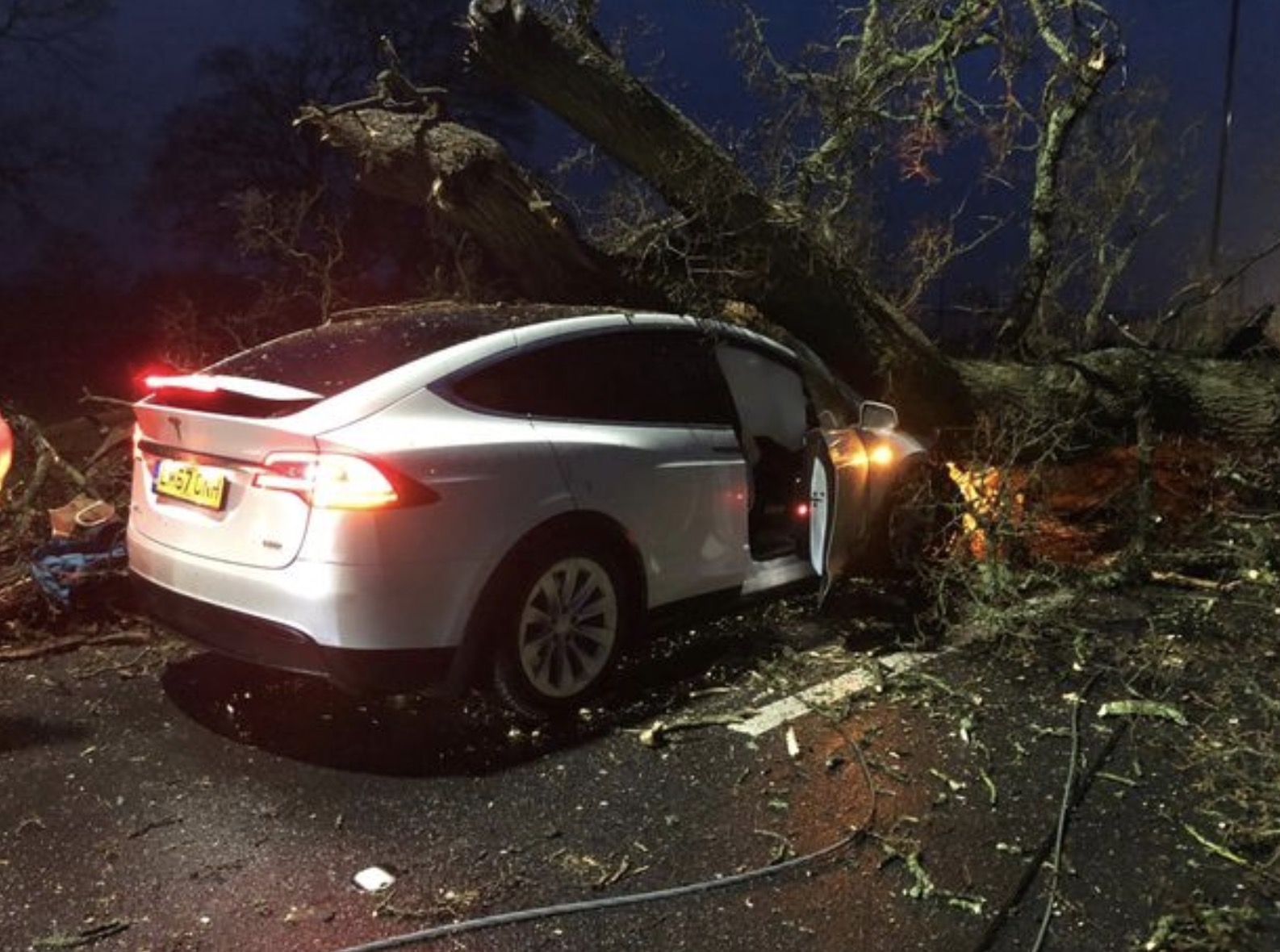 Whitelock also claimed that the Autopilot’s Auto Emergency Braking system did the work:

I was on Autopilot driving home when I saw a flash from the power line which lit up the tree as it fell. We stopped suddenly. There was a loud crack and then the sound of metal on metal.

I was expecting to turn around and see my girlfriend and her mother impaled by branches but incredibly that wasn’t the case. They were both ok apart from a bit of whiplash. It was a miracle we all survived. I helped get them both out of the car and then checked on the other driver on the other side of the tree. When I saw the open Falcon door I couldn’t believe it.

They thanked Tesla for the cars that they believe saved both families:

We were just in pure shock. Tesla has saved eight lives. It just goes to show that life can be over in a split second, but thanks to Tesla making amazing cars that wasn’t the case this time.

They are not the first to believe their lives were saved by Tesla vehicles, and especially the Model X, which is the highest safety-rated SUV by a significant margin with 5-star ratings in every safety category in NHTSA’s tests.

Last week, we reported on a Tesla Model X owner saying that his electric SUV saved his life after a crash down a hill.

First off, I am glad that everyone is OK, but I am skeptical about what is being said by the car owners.

I don’t think it’s impossible that Tesla’s Automatic Emergency Braking system, which is powered by Autopilot, was involved, but I find Sanderson’s comment surprising that he saw the tree fall into the road, but Autopilot applied the brakes before he could.

That would mean that Autopilot detected the tree outside of the road, recognized that it was falling toward the street, and determined that the vehicle was going to hit it and therefore applied the brake.

Based on my understanding of Tesla’s Autopilot and its Automatic Emergency Braking system, it’s not a capability that the system possesses at this time. If the tree was already in the road, then that would be a situation where the Autopilot would have been much more likely to apply the brake, but even then that’s not a guarantee.

There might be something new that I don’t know about but that would be surprising to me, though I’d be happy to be proven wrong.

A situation like that can be quite traumatizing. It can lead to a rush of adrenaline that makes it hard to remember exactly what happened. I think Sanderson might be giving a little too much credit to Autopilot, and he might have applied the brakes himself without knowing.

It’s a crazy coincidence that another Model X was going the other way, but I think a similar situation might have happened, and especially if the two were talking about it, they might have shared their confusion.

That’s just my speculation based on the information we have about the accident.

What would be very interesting is to get the logs from each vehicle and see exactly what happened. Maybe the owners should reach out to “green the only” and see if he can find out.

But no matter what is the actual involvement of Autopilot here, it’s absolutely incredible that two Model X SUVs hit the exact same falling tree and that everyone came out OK.