Tesla (TSLA) rallies near $500 per share as shorts go mad

Tesla (TSLA) continues its strong rally today on positive analyst notes and a broader market rally due to a possible de-escalation of the US/Iran situation.

The stock price reaches close to $500 per share, and those holding short positions are going mad.

Last month, the stock even reached over $420 per share, which was the controversial price at which CEO Elon Musk claimed he secured funding to take Tesla private.

The new year has also been very good so far to Tesla shareholders with the stock being up 17% already, helped by another 5% surge today, following some positive notes from analysts and a broader market rally.

Tesla’s stock (TSLA) is now reaching close to $500 per share as of this afternoon:

Tesla is outpacing the broader market, which was also up this morning following comments from Donald Trump that hinted at a possible de-escalation of the situation in Iran.

The stock was also helped by a price target raise from Argus Research.

Analyst Bill Selesky sees some problem with Tesla’s production ramp-up, but he thinks they are solving those issues:

Despite recent production delays, parts shortages, labor cost overruns, and a host of other difficulties, we expect the company to improve performance over time.

A potential short squeeze could also be helping Tesla’s stock as some traders with short positions on Tesla might still be covering their positions.

The Tesla short community is generally pretty active on Twitter under the tag $TSLAQ, but they have been a lot quieter during this rally.

Many of those who are still commenting are going mad: 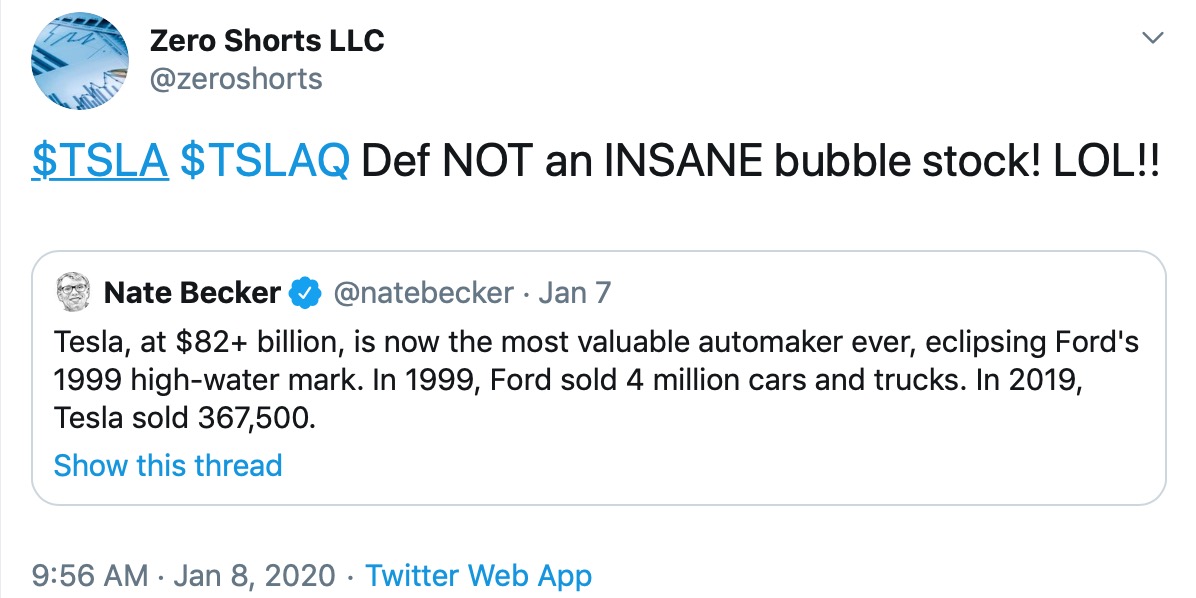 Some of them are even admitting defeat today and considering that they might have been wrong about Tesla: 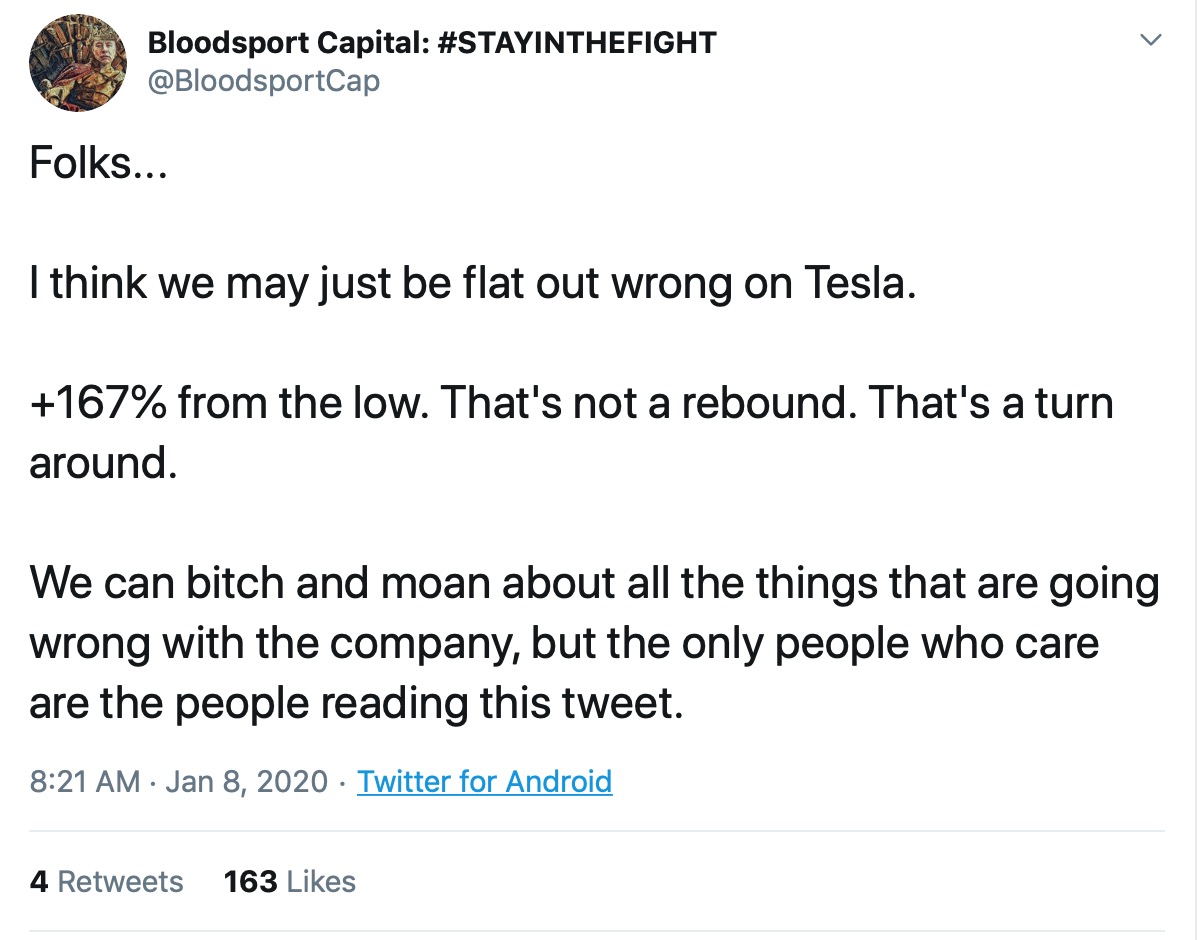 While others are now pushing the idea that the whole company is a fraud orchestrated by Elon Musk: 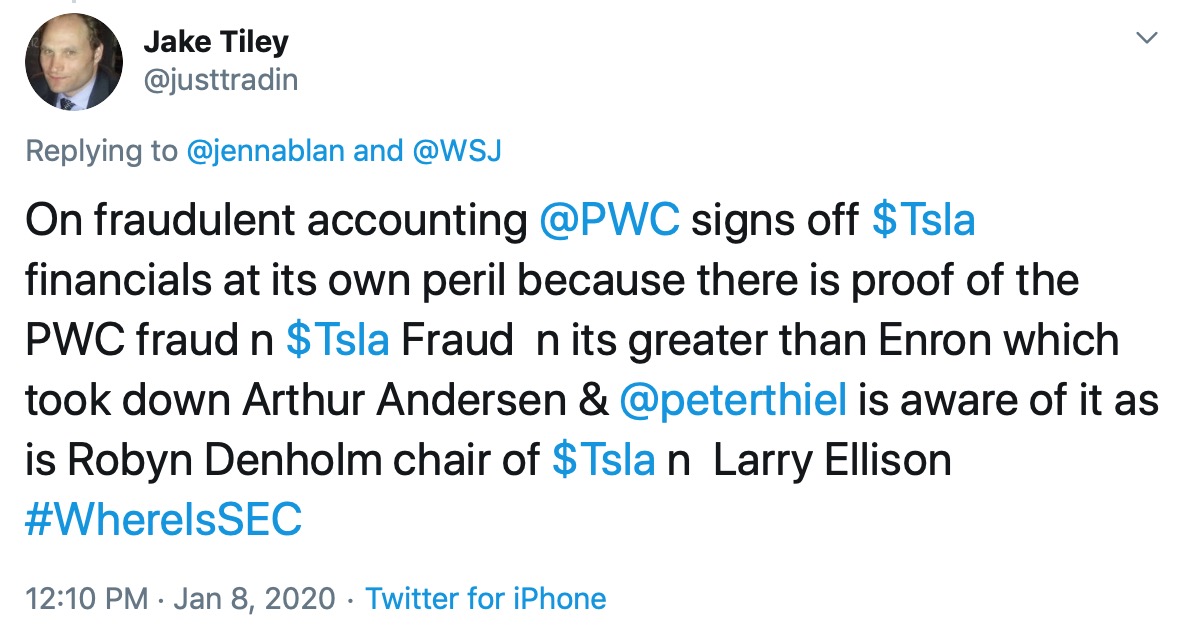 Tesla stock is currently trading at $493 per share at the time of writing.

I am not sorry for the shorts. They get exactly what they deserve. They bet on Tesla failing, and it’s now stronger than ever.

If anything, they’re getting off easy with all the problems they caused in the first place.

It's on days like this that I like to think about all the $TSLAQ and naysayers who have sent me insults and death threats over the years. pic.twitter.com/17efVEUUnH

It’s not to say that everything is perfect at Tesla and the stock can only go up from here, but I think they are well set for a very strong 2020 with the introduction of the Model Y, which I believe could be Tesla’s smoothest vehicle launch yet, and the ramp-up at Gigafactory 3 in China.

I think Tesla might also have a few surprises up their sleeves this year.

Disclosure: I am long TSLA.