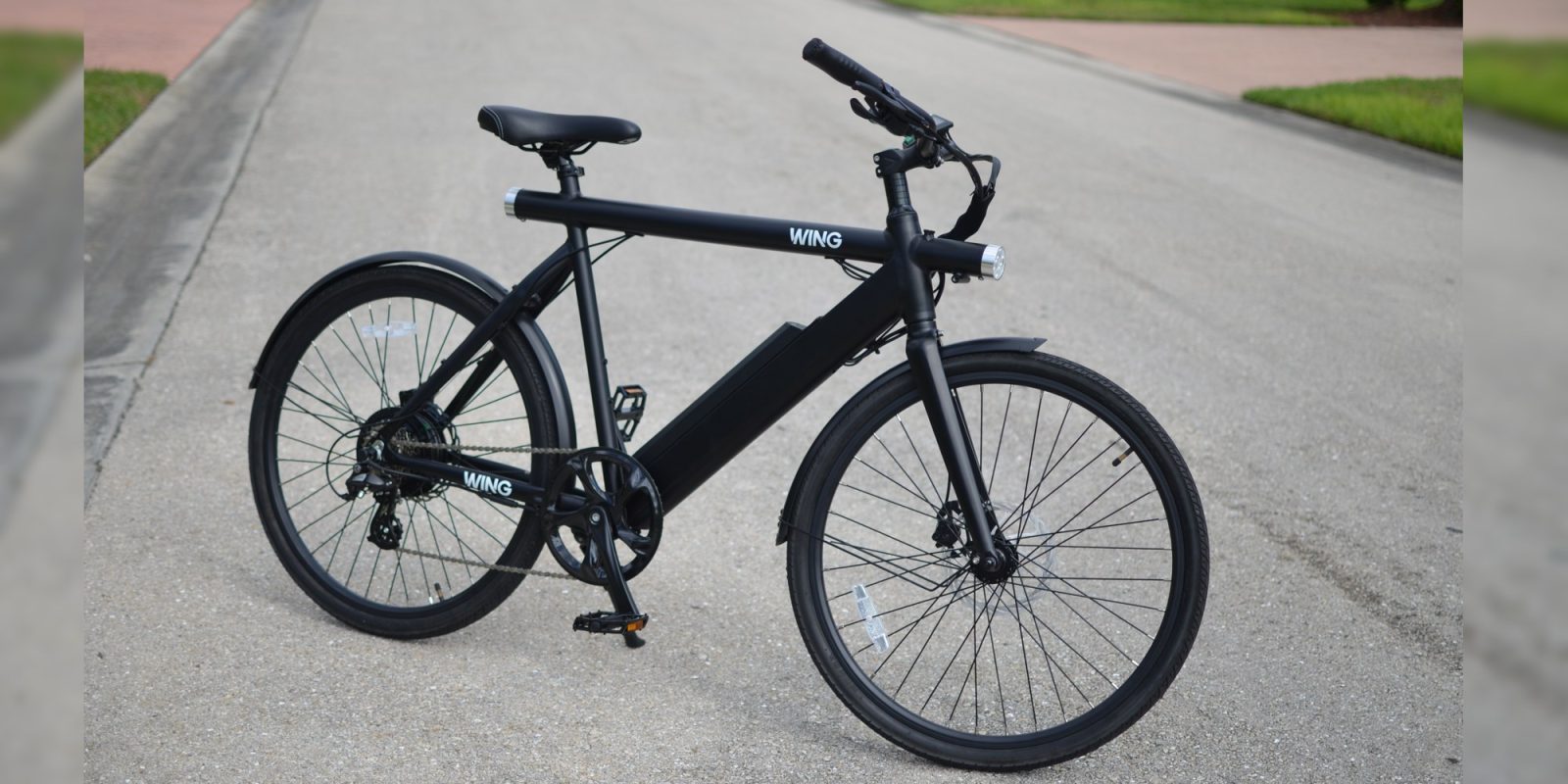 I’m not saying looks are the most important thing for an e-bike. But when so many e-bikes offer similar top speeds, ranges, and other specs, a nice-looking design like the one offered by the Wing Freedom can help set an already good e-bike apart from the rest.

And an affordable price doesn’t hurt either.

It’s a comfortable, agile, and capable direct-to-consumer e-bike with a $1,298 price tag and a healthy list of features.

And you certainly can’t ding it in the style department.

Check out my video review of the Wing Freedom e-bike below, then keep reading for all the juicy details on this electric commuter. 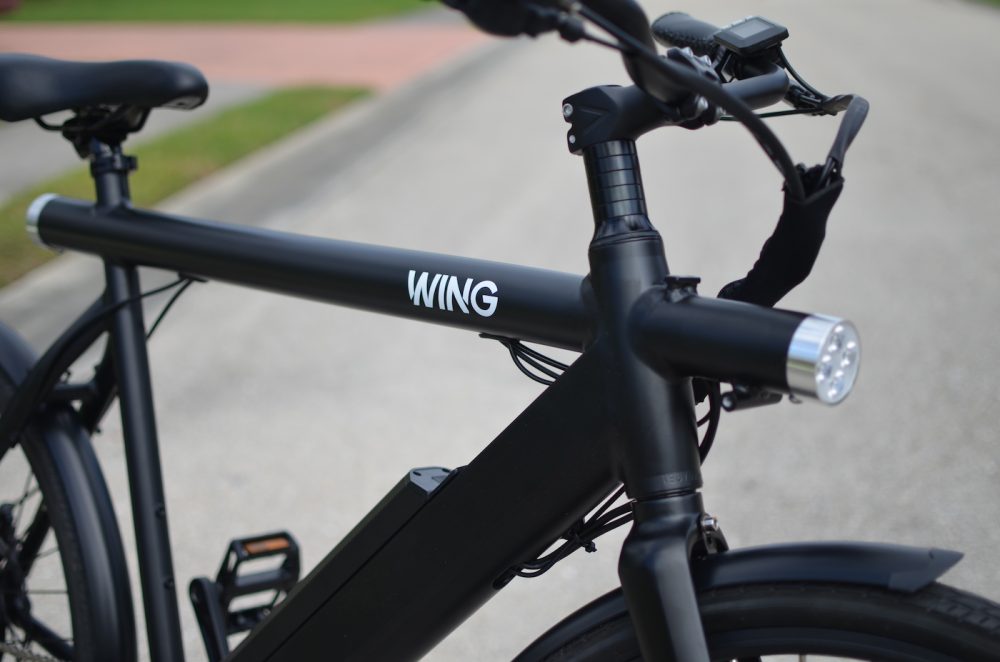 It looks good, but it’s not all about looks

The Wing Freedom is one of those e-bikes that breaks from the standard design. And while this is refreshing, I’d be remiss if I didn’t point out that it bears a striking resemblance to the beautiful e-bikes designed and manufactured by Dutch company Vanmoof. And while it doesn’t feature as many innovations as Vanmoof’s bikes, it certainly comes away with some of the same aesthetic appeal.

Unlike Vanmoof, though, the Wing Freedom didn’t manage to completely hide the battery within the frame. Instead, they’ve gotten most of the way there with a recessed battery that just barely sticks out of the down tube. The battery is also available in three different sizes. For those that want the lowest price and are fine with just 35 km (22 mi) of range, the 317 Wh battery will suffice. But for anyone who wants to maximize range (especially if you’ll be adding the optional throttle), the 500 Wh battery will get the battery specs up to industry standards.

But it’s not all about looks. If the bike can’t perform then it doesn’t matter how good the bike looks or how neatly the battery is tucked away. Fortunately for the Wing Freedom, it performs quite well. There’s really only one thing I’ll knock it on, and that’s the swept-back handlebar style, which to be fair is more of a personal preference thing. The handlebar feels very cruiser-ish, while the rest of the bike gives me solid commuter/hybrid vibes. There’s nothing inherently wrong with the swept-back handlebar, but I just don’t find it as comfortable as a slightly straighter bar, especially when I’m working hard in pedal assist mode.

But outside of my small gripe with the bar choice, everything else ticks my boxes.

Sure, there will be those that complain about the lack of suspension. And that’s a fair point. But this is very much an urban-style bike that is meant for roads and bike lanes. A pothole here and there may reduce ride comfort, but at least the rigid front fork will be strong and reliable, plus more efficient for those of us that like to pedal without too much energy being wasted into bouncing front suspension.

The Bafang hub motor, which is known to be reliable, is a strong performer and gets the bike up to its top speed of 32 km/h (20 mph) quite quickly when you put the bike in top pedal assist level. I spent most of my time at a mid-level of pedal assist, which felt like a nice compromise to me. The bike kept me honest by having to provide some of my own power, but I never felt out of breath or like I was working up a sweat. I felt like I was getting a chance to perform some healthy exercise in exchange for a wind-in-my-hair pleasurable ride experience. Occasionally I’d crank it up to full power and fly around like I was on a motorbike, and to even things out I’d then drop it down into the lowest pedal assist for a good old-fashioned workout. But by and large I kept it right in the Goldilocks zone.

The components on the bike aren’t going to impress anyone on their own, but they’re perfectly acceptable for this level of e-bike. The 180 mm mechanical disc brakes and the 7-speed shifter are enough for a commuter bike and help keep the price reasonable. Sure, I’d love to see hydraulic disc brakes so I don’t have to worry about cable stretch or adjustments, but again, this is meant to be a simple, affordable commuter bike, not a top shelf bike. And so compromises had to be made. 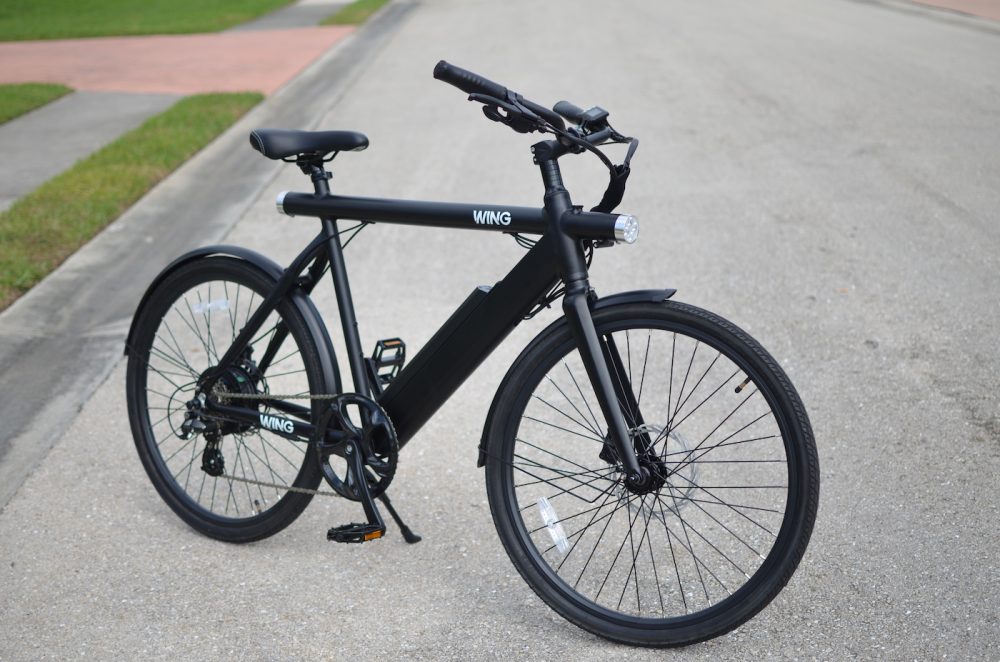 But the fact that you can get an attractive design, built-in lights, an alarm, free fenders, and options for rear AND front racks all for $1,298 (and 12 month interest-free financing option) is still pretty impressive in my book. And judging from the number of commenters I’ve had asking for a Wing Freedom review, I’m not the only one that has found this to be an interesting addition to the e-bike market.

What do you think of the Wing Freedom? Let us know in the comments below!

[Update: Wing reached out to let me know that despite the top speed of 20 mph (32 km/h) that the bike ships with, you can actually unlock another 4 to 5 mph using the display, if you wish. So now I’m the doofus riding around at something less than the top speed. Oh well, at least I enjoyed the better mileage that comes with the stock speed!]