EGEB: UN chief — ‘We urgently need more businesses to back away from fossil fuels’ 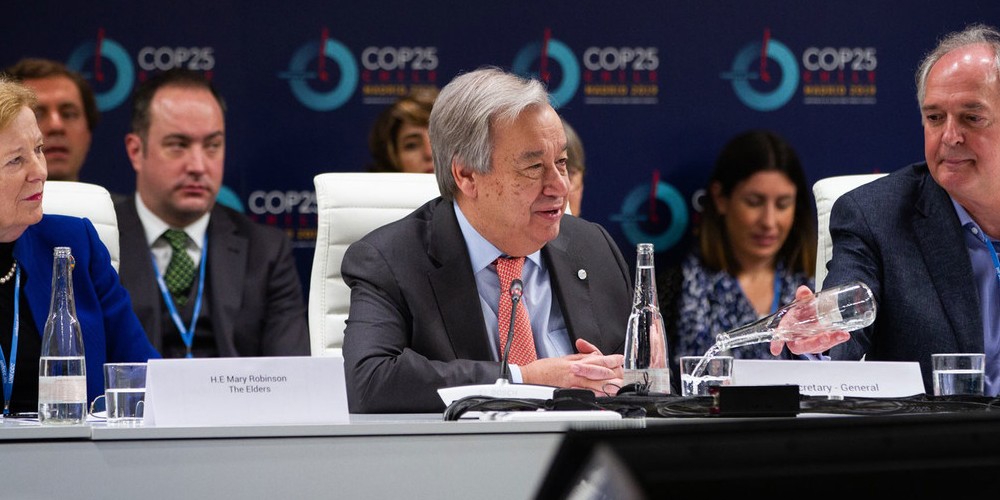 United Nations Secretary-General António Guterres (pictured above) returned to the 2019 United Nations Climate Change Conference (COP25) in Madrid to issue a plea to businesses to pressure governments to address the climate crisis.

He acknowledged that private businesses have made great progress, and they need to continue that momentum by insisting on support from governments.

We urgently need more businesses to back away from fossil fuels – to unite behind the science by taking rapid and ambitious #ClimateAction across operations and value chains.

In his address on Wednesday (click on the link for Guterres’ full speech), he said:

Earlier this year, before the G20 Summit, asset managers representing nearly half  of the world’s invested capital — some $34 trillion — wrote to the world leaders of the G20 demanding urgent climate action and calling on them to put a meaningful price on carbon and phase out fossil fuel subsidies and thermal coal power worldwide.

As businesses back away from fossil fuels it helps send market signals to massively scale up innovative solutions.

I am calling on you, leaders from the private sector and civil society, to challenge your governments to use this opportunity to make clear their economic development policies that will enable your companies to invest decisively in a net-zero future.

We are still seeing too many bureaucratic and regulatory obstacles, including perverse fossil fuel subsidies and many other expressions of government action slowing down the private sector commitment to climate action.

I’m meeting more and more business leaders that complain that they cannot do more because governments will not allow them to do so because of the environment that is still created in the bureaucratic, administrative, tax regulatory, and other frameworks that are under government control.

Shifting taxes from income to carbon, ending subsidies for fossil fuels, and ending investments in and construction of coal plants by 2020 are all efforts that will benefit from bold and genuine business buy-in and support.

Trucks and buses need to be EV

The electrification of trucks and buses needs to be accelerated, says a new report released yesterday by the Union of Concerned Scientists (UCS).

The UCS report states that there are currently about 28 million trucks and buses in the US, or 10% of all vehicles. They are responsible for 28% of total carbon emissions in the transportation sector.

Electric trucks, on the other hand, emit 44% to 79% less emissions than diesel trucks, depending on the type of vehicle. They have zero tailpipe emissions. Further, the ownership costs can be cheaper.

Electrifying US trucks would increase national electricity consumption by 13%, yet would reduce the total demand for energy by 71% due to the efficiency of electric vehicles.

The UCS study says there are three policies that can accelerate the electrification of trucks and buses:

Florida received a total of $166 million from Volkswagen after the 2015 Volkswagen emissions cheating scandal. Seventy percent, or approximately $116 million, of the $166 million will be spent to replace school, transit, and shuttle buses.

Florida will fund a minimum of five and a maximum of 10 school buses per each awarded district. For the first round of replacements… the department is covering 100% of the cost. This is to better understand the entire process of identifying, acquiring, and implementing electric vehicles and their infrastructure.

Buses up for replacement must have a 2009 or older diesel engine, and the school district must permanently disable the diesel engine once it’s replaced.

School districts will work with utility companies to install charging stations for the buses.

Denmark will build one or more artificial islands surrounded by offshore wind turbines with a 10-gigawatt capacity. They will be able to supply power for up to 10 million households. The private-sector-financed park’s capacity would be five times higher than Denmark’s current wind power output, reports the Guardian.

Denmark produced 41% of its energy from wind power in 2018, the highest in Europe.

After the act was passed, Danish Climate and Energy Minister Dan Jørgensen said:

If we are to realize the the enormous potential of offshore wind, new technologies will have to be developed to convert green power into fuel for aircraft, ships, and industry.