Tesla’s Model 3 and Model S have both regained official recommendation from Consumer Reports as part of their latest reliability survey.

Consumer Reports has been recommending and removing their recommendations for Tesla vehicles for the past four years.

Recently, they had removed their recommendation for both Model S and Model 3, citing reliability issues.

Today, the consumer publication updated its annual reliability survey and cited improvements for both of Tesla’s electric sedans.

What we’ve seen with the Model 3 is that they had a lot of problems initially with paint, some body panel issues and a lot of windows that cracked, but over the few years that they’ve been building that vehicle they’ve worked those problems out.

Now both the Model 3 and Model S are recommended by the publication, based on the most recent survey. 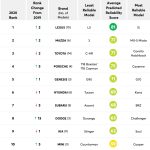 Consumer Reports claims that they surveyed 420,000 vehicles, including nearly 4,000 Tesla cars, for the report.

Honestly, I don’t really care about Consumer Reports‘ recommendations anymore, especially when it comes to Tesla.

I am not saying Tesla shouldn’t improve their reliability — they always should — but I don’t think CR‘s criteria for recommendations always make sense.

They have changed them so many times that I now feel that they are just trying to grab headlines.

I won’t deny that they have been useful at times, like with the Model 3 brake test for example, but they have sometimes made some weird choices that led them to remove and then give back recommendations.

However, they still have somewhat of an important impact on the market.

Tesla used to rely a lot on their customer surveys to claim things like “99% customer satisfaction,” but they seem not to be as close to Consumer Reports these days after all the recommendations issues.

Based on their own data, the vast majority of Tesla owners would recommend their vehicles. I’d trust them over CR.