Tesla teases some of first Model 3 made-in-China, Model Y rumored to be at Gigafactory 3

Tesla has teased some of the first Model 3 made-in-China vehicles in a few images and a Model Y prototype has been rumored to be spotted at Gigafactory 3.

During its earnings last month, the automaker confirmed that it has produced full vehicles at the new factory as part of its trial production:

We are already producing full vehicles on a trial basis, from body, to paint and to general assembly, at Gigafactory Shanghai. We have cleared initial milestones toward our manufacturing license and are working toward finalizing the license and meeting other governmental requirements before we begin ramping production and delivery of vehicles from Shanghai.

Earlier this week, Chairman Robyn Denholm confirmed that Tesla is indeed still looking for a “manufacturing certification” and they expect that to get it by the end of the year:

“We’re working with the local government to get our manufacturing certification, which we hope we will be able to get by the end of the year.”

Nonetheless, the automaker is still producing Model 3 vehicles as part of its ‘trial production’ at the factory in the meantime.

Today, Tesla shared some images teasing some of the first made-in-China Model 3 vehicles at the factory: 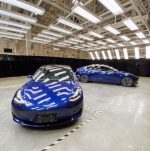 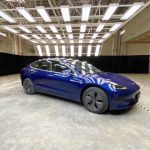 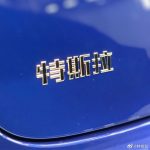 These two vehicles appear to be in Tesla’s inspection area, but the automaker has also produced a few other vehicles based on sightings around the factory.

A recent drone video at Gigafactory 3 showed over a dozen Model 3 vehicles parked in a row outside:

The video was filmed by Jason Yang who claimed that Tesla has completed trial production of the Model Y at Gigafactory 3:

“Tesla Model Y has already completed trial production at GF3 and will be delivered to Chinese users next summer.”

Tesla has confirmed that they plan to produce the Model Y at the factory, but it’s not clear when they plan to start.

Model Y production is expected to start in Fremont, Californa in the summer of 2020.

Some vehicles spotted around the Gigafactory in Yang’s video are rumored to be Model Y vehicles:

However, it’s currently uncomfirmed since it’s difficult to tell from this dstance.

Tesla has been expected to focus on Model 3 production at Ggiafactory 3, where it plans to produce as many as 3,000 vehicles per week next year.