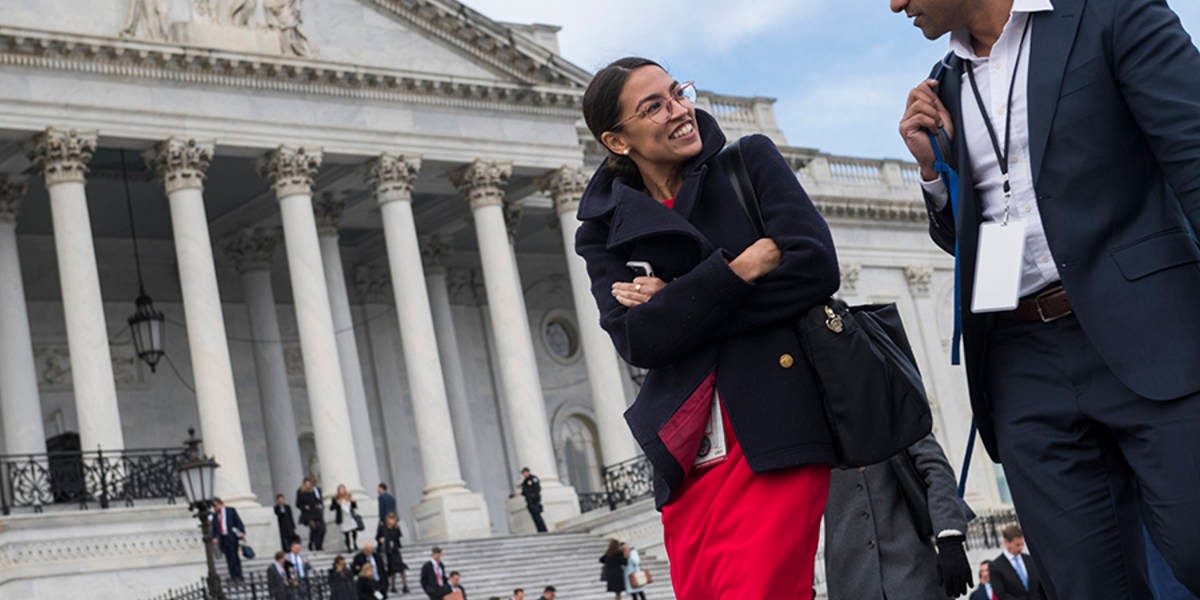 ‘So they knew’ — about the CO2 emissions

Representative Alexandria Ocasio-Cortez (D-NY) questions Martin Hoffert, a scientist consultant for Exxon Research and Engineering in the 1980s, in this video from the Guardian. Hoffert confirms that as far back as 1982, the oil giant knew that the burning of fossil fuels would cause cause CO2 levels to rise, and thus raise the temperature of the earth.

House Democrats on Wednesday laid out evidence that the oil behemoth ExxonMobil had known since the 1970s about the potential for a climate crisis and intentionally sowed doubt about it.

Amazon unveiled three new green projects in the UK and US yesterday, as part of its Climate Pledge.

In the US, Amazon will have solar farms in Warren County, North Carolina, and Prince George County, Virginia, with the farms totaling 215 megawatts of power. A wind farm in Scotland will provide 50 MW. All three projects are expected to come online in 2021.

Amazon announced the Climate Pledge in September, which says the company will become CO2 neutral by 2040. Jeff Bezos said $100 million would be spent on reforestation, and that the company would place an order for 100,000 electric delivery vans. Amazon also said it would use 80% renewable energy by 2024 and 100% by 2030.

In an attempt to be accountable and transparent, Amazon has launched a sustainability website to keep the public informed about its progress toward becoming carbon neutral.

There is a group of activist Amazon employees called Amazon Employees for Climate Justice who are pushing for the company to cut ties with the fossil-fuel industry and are marching in climate-crisis protests.

Last month, thousands of Amazon employees all over the world walked out for the Global #ClimateStrike to call attention to Amazon's lack of climate leadership. Jeff Bezos responded by releasing the Climate Pledge.

We are thrilled with our win, but we know it is not enough. pic.twitter.com/hqVPYd6elz

Construction of coal plants in Southeast Asia has stalled, with only Indonesia breaking ground on new stations in the first half of 2019, according to a Global Energy Monitor report released yesterday called “More Fizz Than Boom: 2019 Sees Coal Plant Growth in Southeast Asia Dwindling as Pipeline Continues to Shrink.”

Coal power is facing something of a perfect storm. Communities are rejecting it due to the high levels of pollution, renewable energy technology is undercutting it in terms of quality and cost, and financial institutions are backing away fast, making funding an increasing challenge for coal proponents.

Southeast Asia is home to three of the world’s top 10 largest coal power pipelines. Yet the low rate of new construction and quickly declining pipeline suggests much of this capacity will not be realized.

US is out of the Paris Agreement — for real

Donald Trump confirmed that the US will definitely be withdrawing from the Paris Agreement.

(Op-ed note: I never had any doubt he was going to pull out of the Paris Agreement based on his utter disinterest in — and even disdain for — anything about climate change or preserving the environment, but hey. Now it’s official.)

Trump told delegates at an energy conference in Pittsburgh that it “disadvantages the United States to the exclusive benefit of other countries.”

He said it would leave “American” workers, who I love, and taxpayers to absorb the corst [sic] in terms of lost jobs, lower wages, shuttered factories, and vastly diminished economic production.”

According to the BBC:

He described the accord as a bad deal and said his pro-fossil-fuel policies had made the US an energy superpower.

The earliest he can formally start the process of withdrawing the US from the Paris accord is November 4.

The pull-out will take effect a year later — the day after the 2020 US presidential election — assuming that Mr Trump is re-elected.

Maybe he could speak with the Texas oil workers who now have well-paid jobs in the wind-farm industry. Texas is a red state. Or Southeast Asians, for that matter.