Tesla is working to convert a building currently used as a warehouse in Fremont into a major new R&D lab and vehicle testing facility focused on improving reliability.

In recent years, Tesla has been expanding its presence in Fremont way beyond its factory.

We reported last year on Tesla moving 1,500 employees to large new office buildings in Fremont and the company also operates several other facilities in the city.

Electrek obtained building plans that Tesla submitted to the Fremont Planning Department to modify the zoning of a building on Kato road last month.

According to those plans, Tesla is working on converting a location currently listed as a “warehouse” into a major R&D location that will include a vehicle R&D lab, a “Future Energy Reliability Lab”, a vehicle testing facility and offices.

Tesla’s previously “approved use” of the 302,400 square foot building was mostly for a warehouse, but also for a service center and service training facility.

Now the automaker is asking for the authorization to change to facility into a R&D center where over 250 employees would be working in labs and at a large vehicle testing facility.

Here are the new plans for the building: 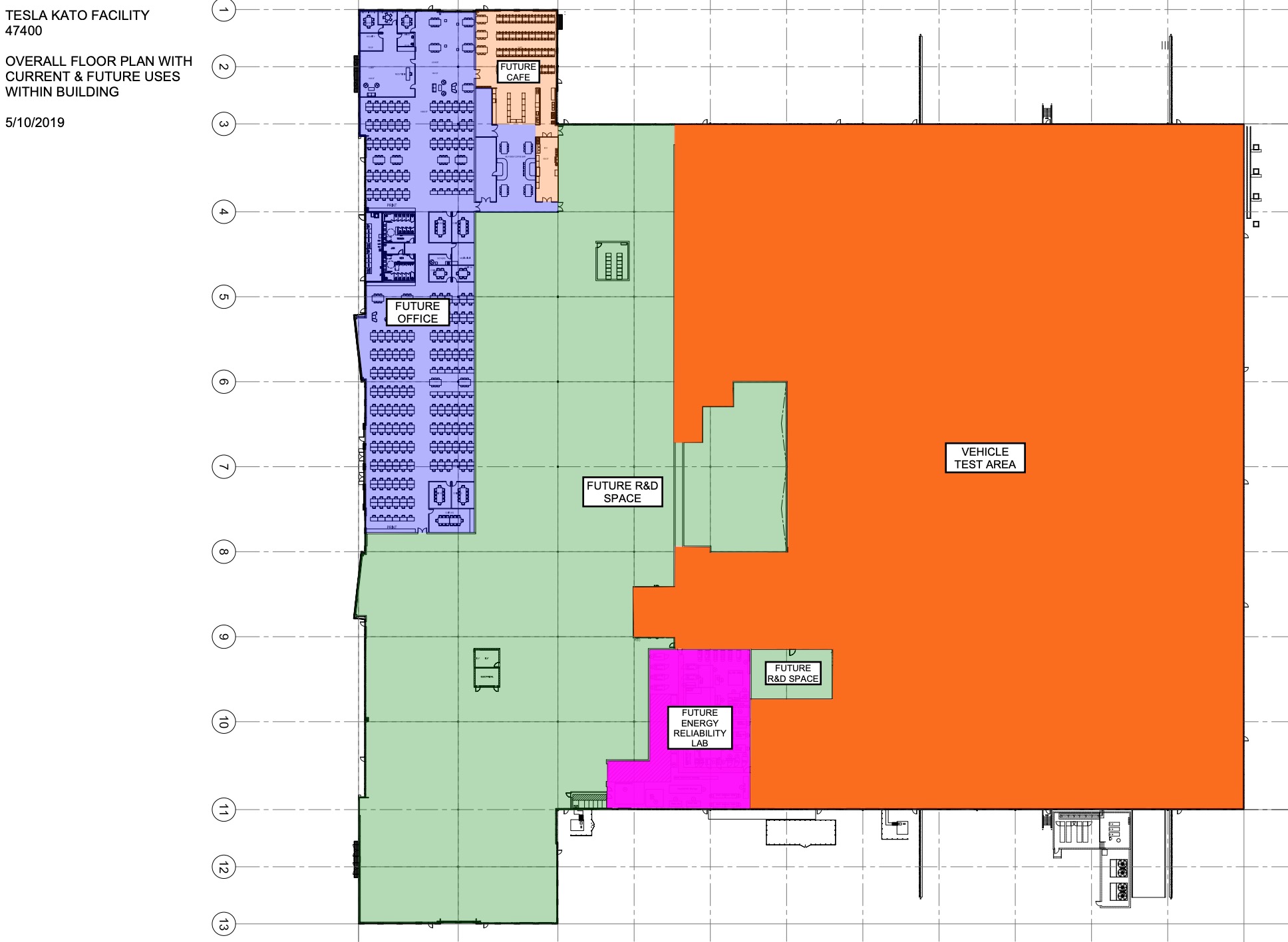 According to the filing, the main R&D space would be equipped with “vehicle lifts, test chambers, workshops, and storages.”

The “Future Energy Reliability Lab”, which is going to be located in a smaller 8,500 sq-ft space, is going to be outfitted with “test chambers, a workshop, and Solar Energy Product Testing Equipment.”

Tesla plans to have about 100 employees working on research and development at the location.

As for the vehicle testing facility, which is going to take the bulk of the space (165,500 sq-ft), it is going to have a “crash track, a crash sled, test chambers, vehicles lifts, and labs.”

The automaker plans for 146 engineers and technicians to be working in this department.

Some of the space is being “set aside for future R&D uses which have not yet been further defined”, according to Tesla’s proposal with the City of Fremont.

The focus of the location appears to be reliability testing.

Tesla is currently listing about a dozen positions for engineers and technicians related to reliability in Fremont.

“Tesla’s energy reliability team is looking for a skilled and motivated technician to support the development of new energy and supercharging products. The primary work is located in our well-equipped lab, building, debugging and testing our various electronics, battery, and thermal systems and components.”

Tesla is also looking for “Engineering Technicians for Reliability & Test in Fremont”.

The automaker describes the position:

“This position will work as a member of Tesla’s Engineering Test Team to support vehicle level testing for Reliability and Durability tests performed in-house and at external test labs. The primary objective of this role is to maintain and assure safe and reliable performance of test vehicles and conduct vehicle level tests in accordance with Tesla test procedures. The successful candidate for this position must have a broad background in automotive maintenance and testing.”

It’s funny because Elon recently said that “the best service is no service” and Tesla is focusing on improving reliability so that owners will almost never have to bring their car to service and Tesla is now literally turning a service training facility into a reliability lab.

Of course, I am sure that Tesla is planning to do service training somewhere else and the company actually moved a lot of its training online, but it’s still an interesting turn of event.

Elon appears to be serious about his ambitious reliability goals for Tesla.

With the advent of self-driving cars, vehicles are going to see a lot more hours of operation in a much shorter period of time. It will not be rare to see cars doing over 80,000 miles per year.

Automakers who make their self-driving cars more reliable are going to get a lot more value out of them and achieve lower cost of per mile.

When you don’t have a driver and you are running on electricity, maintenance and the amortization of the vehicle are starting to play a bigger role in the cost per mile of a self-driving vehicle.