BMW has introduced a few new digital features for its plug-in hybrids that aim to encourage — and even incentivize — electric driving on the vehicles. The technology could have big implications as the world shifts away from fossil fuel vehicles.

The automaker announced that from 2020 forward, all BMW Group PHEVs (like the 330E) will come standard with the BMW eDrive Zones function. This feature will use geofencing technology to automatically detect when the vehicle has entered a zone that a city has designated for emission-free driving.

At that point, the PHEVs will automatically switch to all-electric driving, without the driver needing to take any operating steps. This will optimize vehicle efficiency, reduce operating costs, and of course, reduce emissions.

PHEV drivers will be able to earn points for every kilometer they drive on solely electric power, with an extra bonus available for driving in eDrive Zones. More myBMW points can be earned by charging the PHEV’s battery.

Users can then redeem those points for rewards. BMW gives a few examples of these rewards, including free charging credits for the carmaker’s ChargeNow program, and products from BMW’s Share Now and Park Now services, in addition to the ConnectedDrive App Store.

BMW says its myBMW points service will be available for its PHEVs through the ConnectedDrive App Store in 2020.

The carmaker used similar features in a pilot project last year in Rotterdam, the Netherlands, and found with both of these features in place, “PHEV drivers used pure electric mode for over 90 percent of the distance they drove within the Rotterdam eDrive Zone once they had connected the app to the vehicle.”

During the pilot program, a driver moving into Rotterdam’s eDrive Zone would get a message on their smartphone and in-dash screen, with a request to switch the vehicle to electric mode. The production version of this feature will do so automatically. 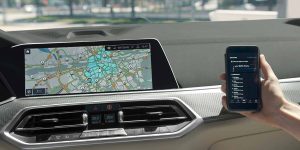 BMW’s PHEVs tend to have an electric range around 20 miles, and many PHEV drivers may never encounter an urban emission-free zone, so the actual added electric driving time may be limited. And what happens if you drive farther than 20 miles within an emission-free zone — unlikely, but not impossible — or if you enter a zone with a partial charge?

That being said, a little help is better than none at all. These are neat features which honestly should be standard on all future PHEVs, and it wouldn’t hurt to extend the feature to other urban areas when possible — not just specific emission-free zones.