Tesla’s dashcam system, TeslaCam, captured a video of a lane-splitting motorcyclist intentionally hitting a Model 3’s side mirror apparently for not making space.

The Model 3 was on Autopilot and didn’t move to make space for the motorcycle, which raises an interesting question about the use of the driver assist system.

In California, it is legal for a motorcycle to ride between lanes or rows of slow moving or stopped in traffic vehicles moving in the same direction.

A Model 3 owner going by u/yorkhung on Reddit claimed that he was “attacked” by a lane-splitting motorcyclist yesterday:

“Today, I was driving on I-880 North using the Autopilot, and I was attacked by a motorcyclist.”

What he described as an “attack” was actually hitting the side mirror of his electric car.

He released a video captured by the TeslaCam on his Model 3:

The motorcyclist appears to have been frustrated by the fact that the Model 3 driver didn’t move to the left side of the lane to give him more room to lane split.

“I was on Autopilot going straight in the carpool lane for a while. The motorcyclist was just mad because his bike is very wide and have little space to pass.”

We previously reported on a video showing how Tesla Autopilot detects lane-splitting motorcycles and the results have been mixed.

This is actually an interesting situation.

Obviously, the motorcyclist is in the wrong. It’s not justifiable to hit the Model 3’s mirror under any circumstance, especially considering it renders unusable a safety feature of the vehicle.

But interestingly, the Model 3 driver is also in the wrong for not moving to the left – at least according to CHP’s lane splitting safety guidelines: 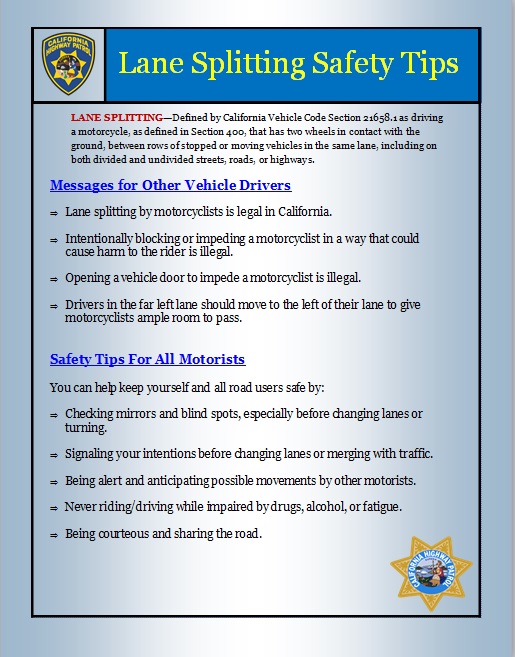 The driver appears to be using Autopilot as an excuse for not having given the motorcyclist space, but Tesla drivers are supposed to be responsible for monitoring the road and being ready to take control at all times when using Autopilot.

Again, I’m not defending the motorcyclist here. He shouldn’t have hit the Model 3 and if the Tesla driver wants to report the incident, he is within his rights.

Either way, it would be interesting for Tesla to try to implement better ways to detect lane-splitting motorcycles and have Autopilot potentially react to them by safely moving to the left to let them pass.