With the launch of Supercharger V3, Tesla pushed the industry to higher charge rates, but Audi argues that it doesn’t mean much if they can’t sustain it for a decent period of time.

Charging speed is seen as one of the main features that need to be improved in order to facilitate the widespread adoption of electric vehicles.

Automakers have different approaches to improve that speed and shorten the charging sessions for electric car owners.

The most often used metric of comparison is the top DC power input (in kW) that the vehicles are capable to receive from charging stations.

When combining its new Supercharger V3 and the Model 3, Tesla pushed the charge rate to 250 kW, which is a new high for electric vehicles currently in production.

It’s an impressive feat, but Audi put it in an interesting perspective during a presentation yesterday.

In a presentation about the Audi e-tron electric SUV yesterday, Matthew Mostafaei, Audi’s manager for e-tron and connected vehicles in the US, presented this interesting chart comparing the charge rates of some electric vehicles (Update: the chart was updated by Audi after they mistakenly made the V3 cycle start at 0%): 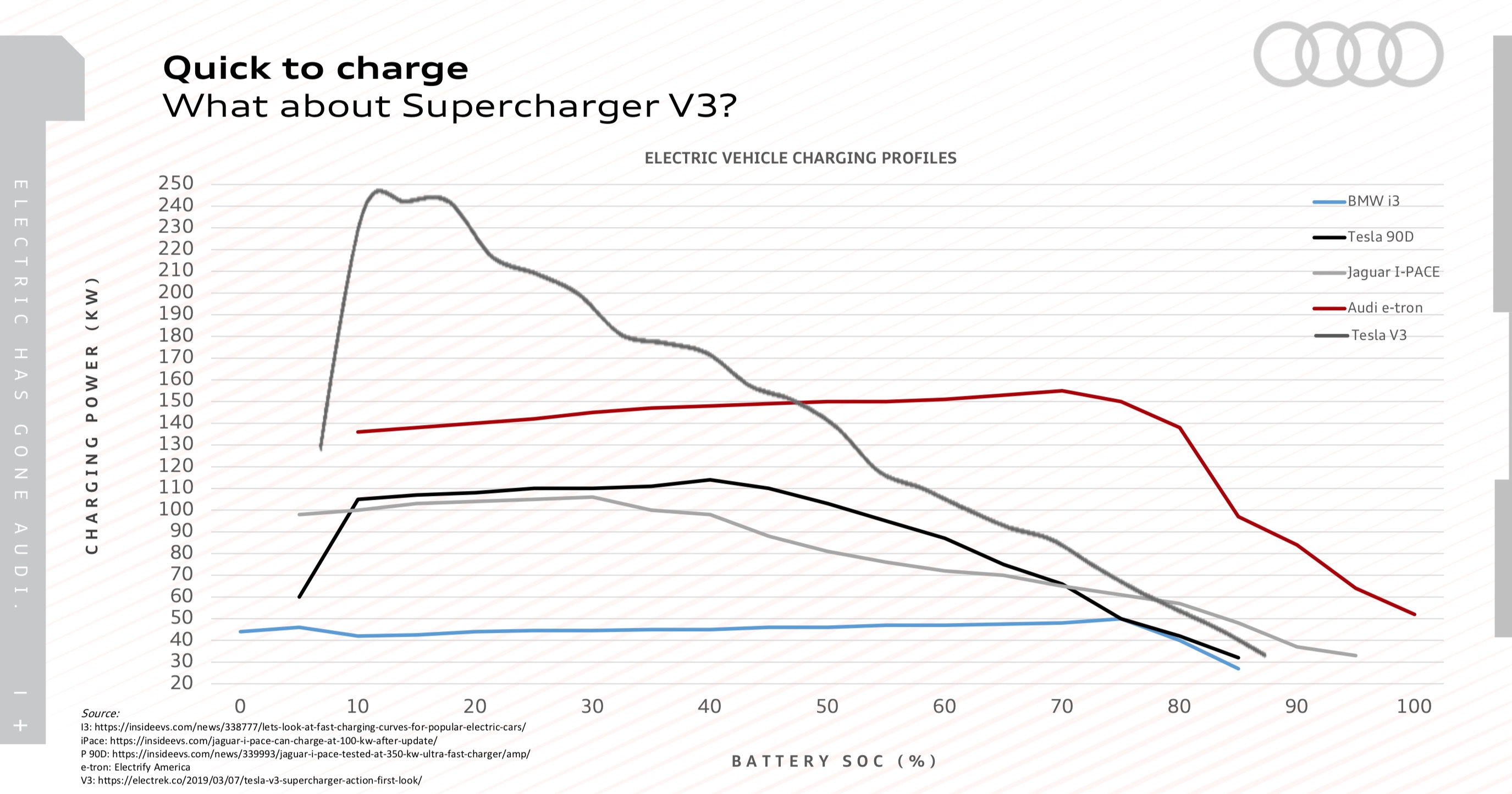 Mostafaei applauded Tesla for pushing the top charge rate to a whole new level, but he also highlighted that Tesla’s Supercharger V3 charge rate tempers drastically throughout a charging session based on the data available.

In comparison, Audi’s e-tron is able to maintain a 140 kW+ charge rate until a much higher state of charge. The German automaker claims that it is able to do this due to its battery cooling technology and its bigger than average energy buffer.

The engineer also admitted that the comparison is not perfect due to Tesla releasing very little data on Supercharger V3 and real-world data being limited with only one V3 station in operation.

I think this chart is really interesting.

Audi is right. Their approach does offer significant advantages, especially if you are looking to get a full charge out of the charging session.

But Tesla’s Supercharger V3 beats everything when it comes to getting your state-of-charge to a decent level quickly.

You can get from 8% to 50% in just 15 minutes. That’s over 130 miles of range in 15 minutes and depending on your use case, it can make a big difference in your travel time.

Tesla’s other advantage is its efficiency. It makes it so you get more range out of every kWh of energy added through charging – resulting in higher miles per hour of charging.

In short, the two different approaches both offer their own advantages and disadvantages that will vary based on your use case.