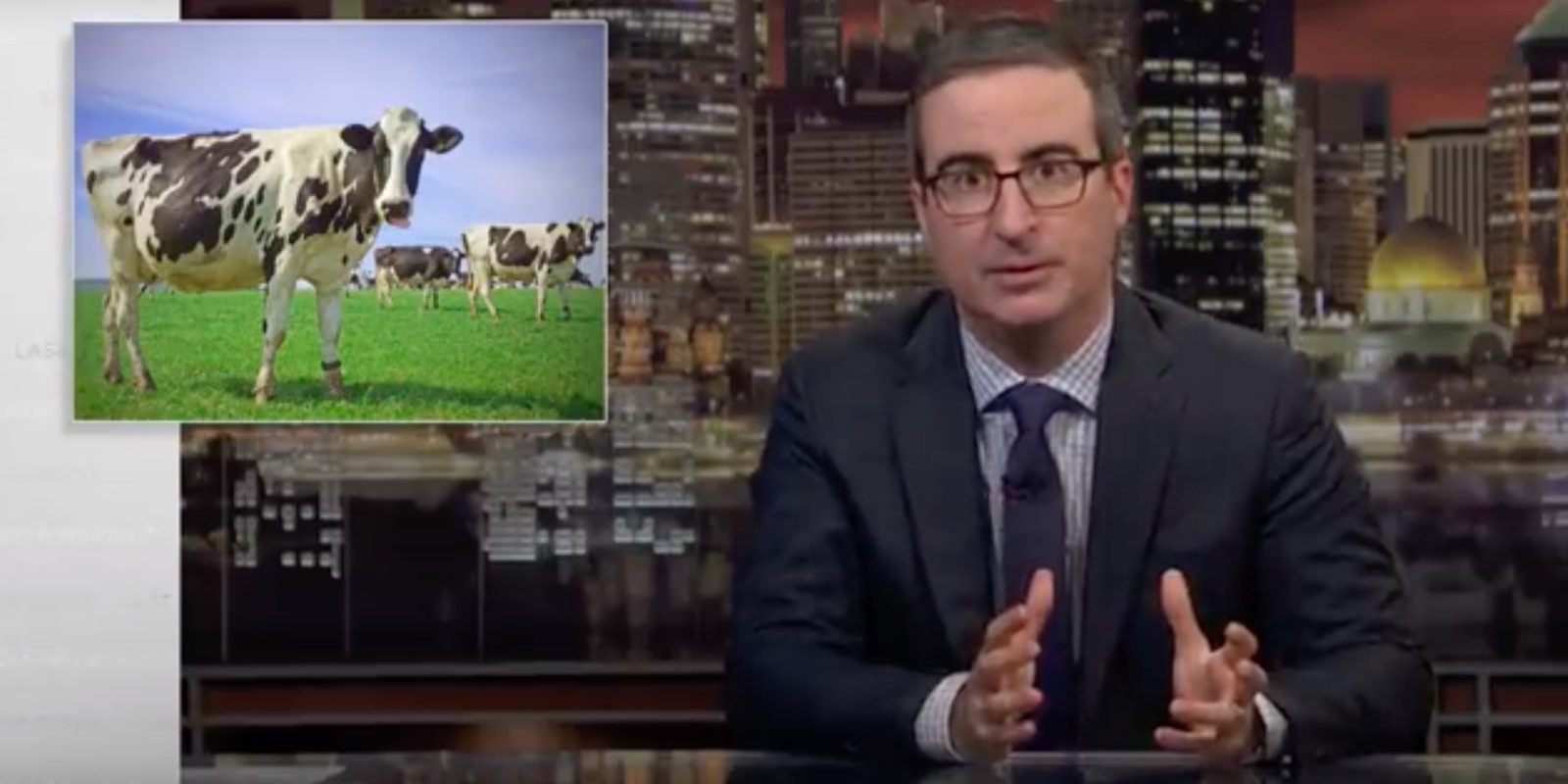 As explained, an early draft of a Green New Deal FAQ contained a passing joke to farting cows and airplanes, and as Oliver says, it’s “clearly supposed to be a joke, but it wasn’t a great time to attempt one. And even AOC admits the rollout of the Green New Deal was the biggest mistake she’s made in Congress, and she is right about that, because it gave an opening for these idiots to pretend the Green New Deal was all about hamburger stealing, when it is not.”

The segment also gets to the heart of the GND’s purpose — kickstarting a larger conversation on climate issues and energy transition, and setting aggressive targets. As Oliver says,

“It’s important to note the Green New Deal contains no detailed specifics on how it will achieve any of its goals, which sounds like a criticism, but it is really not.”

From there, Oliver focuses on carbon pricing, which takes up about half the time of the 19-plus minute segment. Oliver brings in Bill Nye, who eventually gets rather angry and profane while explaining what carbon pricing is.

Oliver even makes a reference to Elon Musk during this time, saying Bill Nye’s “point about incentivizing new technology is really important, especially because our current low-carbon technology strategy is essentially hope that this guy (points to a picture of Musk) stops calling people pedophiles long enough to invent an affordable electric car and right now the pedophile-to-car balance is way off.”

Oliver points out nothing is extreme about the idea of carbon pricing, as it’s widely supported by economists, and more than 40 governments worldwide have adopted some kind of carbon pricing strategy.

The full segment is below. Being HBO, of course, not all of the language is safe for work:

“However bumpy its rollout was, to its eternal credit, the Green New Deal has succeeded in getting people talking. But that won’t mean anything unless that talk now turns to actions — and putting a price on carbon could potentially be one of them. Although, let me reiterate, it will not be enough on its own by a long shot. We’re going to need a lot of different policies working in tandem, and we have to take action right now.”

That sums up some of what we’ve been saying over the past few months. We’d encourage readers to look back at some of our other Green New Deal articles, but Oliver’s segment is a pretty good quick primer on both the GND and carbon pricing, and should help bring some greater understanding to these concepts.