In this edition of Climate Change Weekly:

The big report that kicked off the week came from the Intergovernmental Science-Policy Platform on Biodiversity and Ecosystem Services, which found that “Nature is declining globally at rates unprecedented in human history — and the rate of species extinctions is accelerating, with grave impacts on people around the world now likely.”

Among the tragic findings, the comprehensive report notes that more than 1 million animal and plant species “are now threatened with extinction, many within decades, more than ever before in human history.” IPBES Chair Robert Watson said,

“The Report also tells us that it is not too late to make a difference, but only if we start now at every level from local to global. Through ‘transformative change,’ nature can still be conserved, restored and used sustainably – this is also key to meeting most other global goals. By transformative change, we mean a fundamental, system-wide reorganization across technological, economic and social factors, including paradigms, goals and values.”

And yet, in the very same week, Reuters reported that Democratic presidential candidate Joe Biden is considering a “middle ground” climate policy that “he hopes will appeal to both environmentalists and the blue-collar voters who elected Donald Trump.”

While the policy would likely include rejoining the Paris Agreement and restoring fuel economy standards, it could also “be supportive” of nuclear energy and natural gas. But is a “middle ground” climate policy a climate policy at all?

In American views on climate change and climate-related policies, Yale Climate Communication took a close look at the shifting views on the Green New Deal. They found that Republican awareness increased drastically, and Republican support decreased even more drastically from December 2018 to April 2019. And, surprise, it looks like a certain TV network is having an effect: 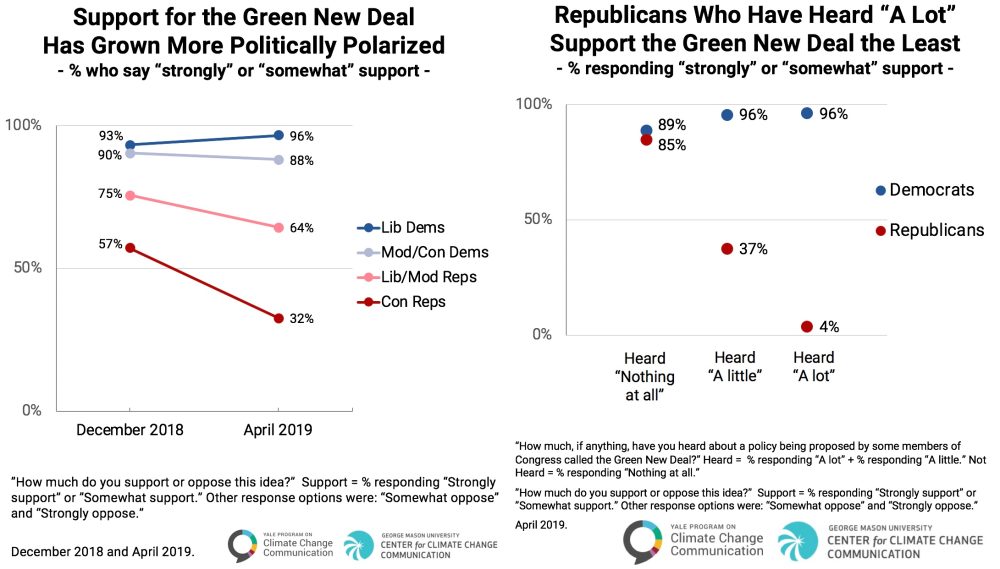 Meanwhile, Secretary of State Mike Pompeo called the Arctic’s melting ice caps “new opportunities for trade.” The US then refused to sign a declaration protecting the Arctic “due to its wording regarding climate change,” as The Independent reported.

The news was much different in Europe during the past week, where Ireland became the second country in the world to declare a climate emergency, following the UK. As RTE reports, Chair of the Climate Action Committee, Fine Gael’s Hildegarde Naughton, said the outcome was “an important statement” but added “now we need action.”

Iceland is using a form of carbon capture and storage that involves turning CO2 into fizzy water before injecting it into rock under ground. And it seems to be working quite well, Popular Mechanics reports.

Speaking of interesting climate solutions, The Economist takes a look at a recent paper which details a possible method to save coral reefs.

The longer climate action is delayed, the more companies will suffer financially, UN Environment says. New analysis shows that “government inaction on climate change will further exacerbate costs and risks, to the tune of USD 1.2 trillion for 30,000 of the largest listed companies.”

The Green New Deal is a resolution focusing on l…