‘Tesla saved my life’, says owner after walking away from high-speed crash on Autopilot

A Tesla Model S owner says that Tesla’s safety level “saved his life” after he managed to walk away mostly uninjured after a horrific high-speed crash on Autopilot.

Peder Hulthin, a Tesla Model S 70D owner from Norway, told Electrek (after first sharing the story on the Teslanytt facebook group) that he was driving his electric car on Autopilot on the highway between Oslo and Drammen when a car swerved in and out of his lane.

As the vehicle exited his lane, there was red van stuck in the middle of the highway and neither Hulthin or Autopilot could react in time to avoid the crash.

The Model S hit the vehicle head-on at about 85 to 90 km/h, according to the driver.

Hulthin shared pictures of the aftermath with Electrek — showing just how strong of an impact the Model S had to absorb: 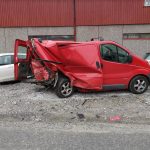 Despite the severity of the crash, Hulthin says that he was able to walk away from the accident with only bruises related to the airbags.

“The car has without a doubt saved my life and Tesla’s engineering has done its job.”

The Model S is known to be amongst the safest cars in the world based on its safety ratings, but it is especially performing well when it comes to front-end collisions due to its large crumple zone.

The lack of engine at the front serves to absorb the energy in the instance of a crash instead of pushing on the cabin.

We have seen many previous examples of severe crashes involving Tesla vehicles where the crumple zone was completely destroyed, but the driver and passengers survived.

It’s an interesting example of how electric vehicles can be more easily designed for safety.

As for the Autopilot component in the crash, we have now seen many examples of Autopilot not recognizing a stopped vehicle on the highway, especially after a lead vehicle exits the lane.

In this instance, maybe there wasn’t time to react either way, but it looks like the emergency braking system didn’t engage. It’s something that Tesla really needs to work on.