Tesla (TSLA) is set to announce its first quarter 2019 financial results today after the markets close. As usual, set to follow the results is a conference call and Q&A with Tesla’s management at 2:30pm Pacific Time (5:30pm Eastern Time).

Tesla already released its Q1 2019 numbers confirming the production of 77,100 vehicles and deliveries of 63,000 vehicles.

It’s an important increase year-over-year, but the market is focusing more on the significant drop quarter-over-quarter after the record 90,700 vehicles delivered during the previous quarter in Q4 2018.

Wall Street’s revenue consensus for Tesla during the first quarter is $5.779 billion and Estimize, the financial estimate crowdsourcing website, predicts a slightly higher revenue of $5.865 billion.

Of course, they are both predicting an important drop from the last quarter when Tesla made $7.2 billion. 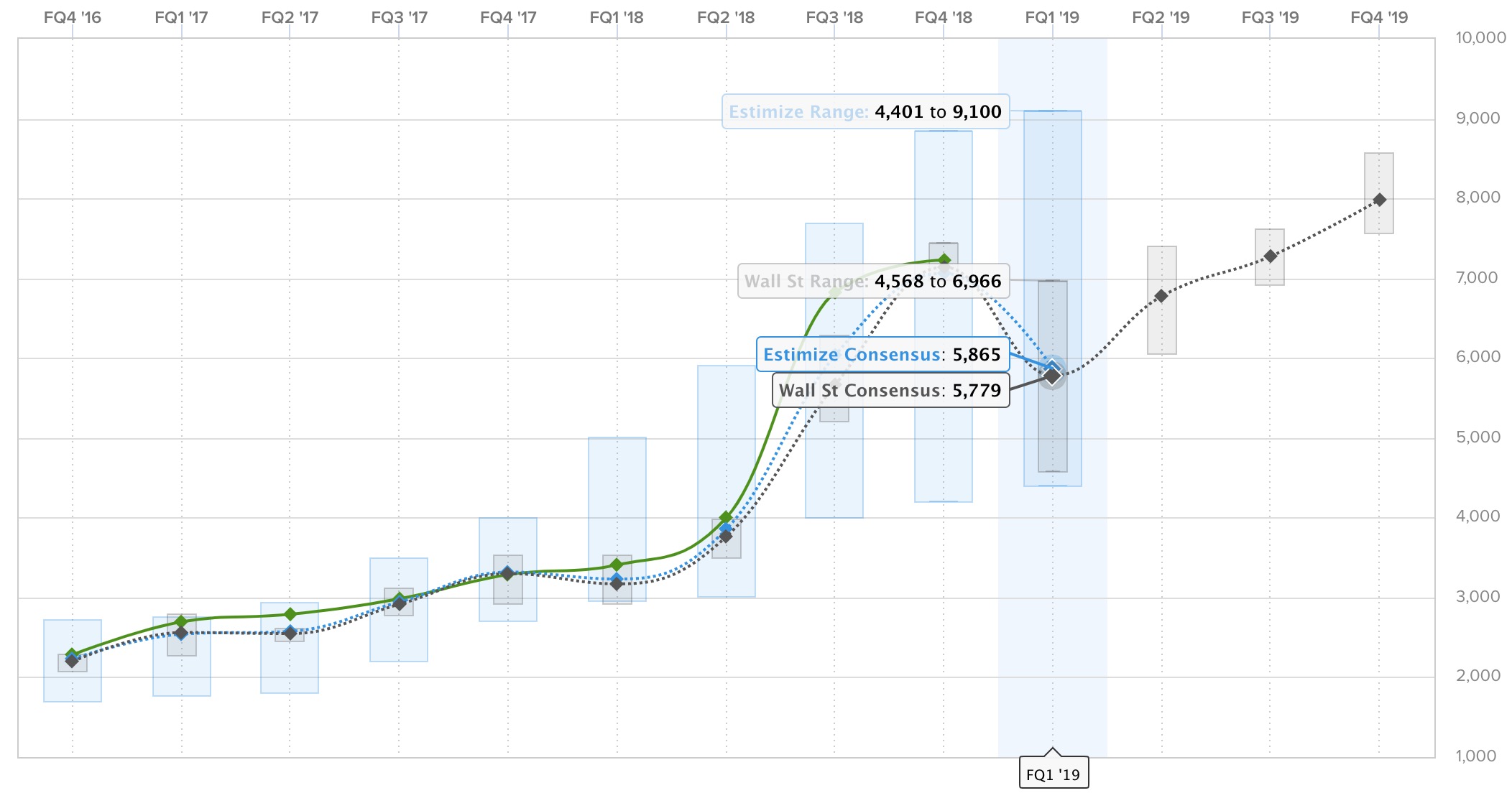 Obviously, the important estimated revenue drop comes due to the already announced drop in deliveries quarter-over-quarter.

That said, if Wall Street is right, it would still represent a massive growth in revenue compared to the same quarter last year when Tesla reported $3.4 billion in revenue.

The Wall Street consensus is a loss of $1.21 per share for the quarter, while Estimize’s prediction is a smaller loss of $0.79 per share. 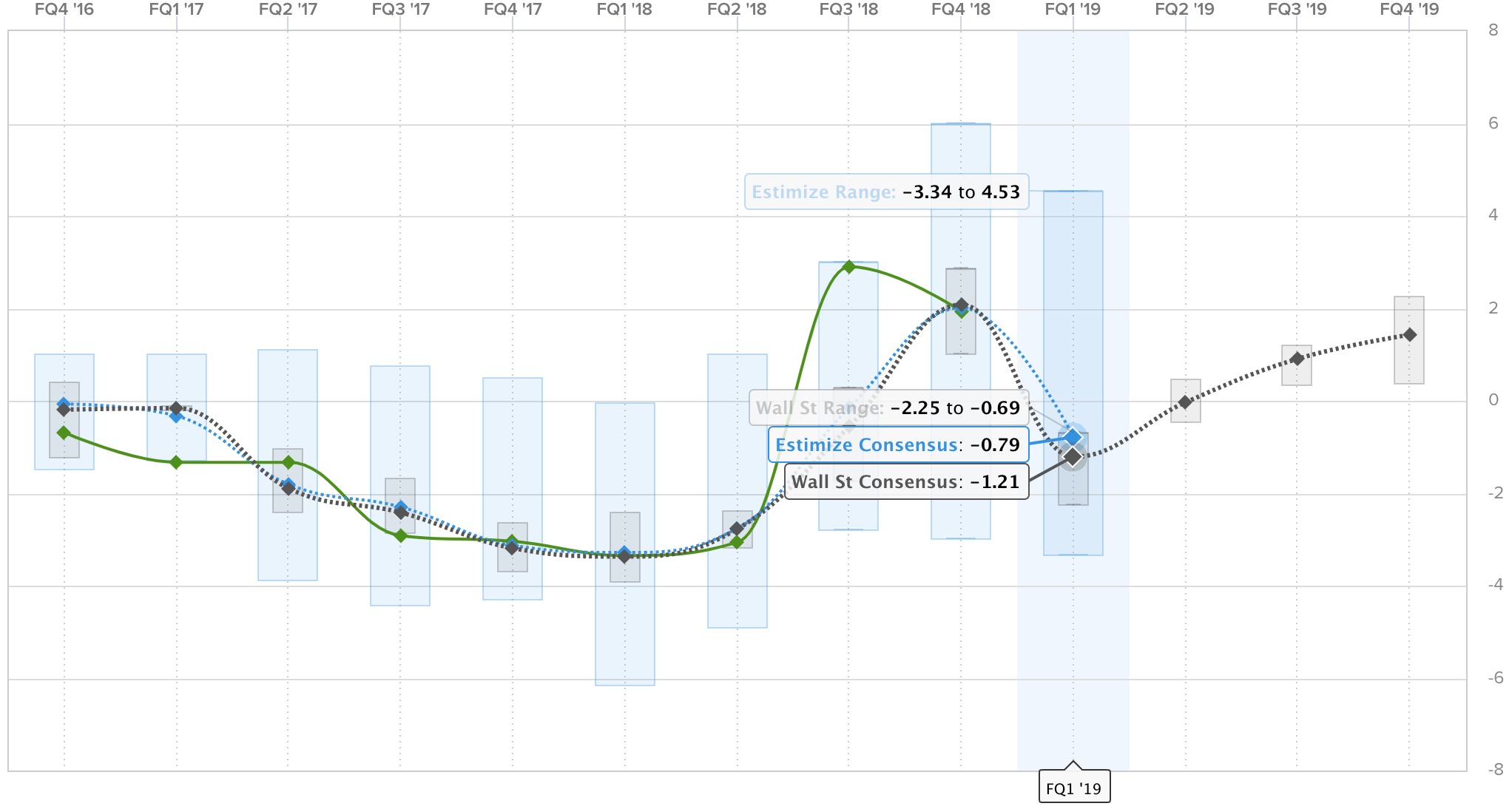 CEO Elon Musk already warned the market this quarter that Tesla is likely not going to be profitable, but he also indicated that they are going to be close to breakeven.

It looks like most people believe that Tesla is still going to report a significant loss.

There’s going to be a lot to talk about this quarter. As we have been extensively covering, Tesla has made a lot of weird moves during the first 3 months of the year that made them look like they were under an important cash crunch.

Tesla’s management is going to have to go over some of those moves in more detail during the earnings.

All of that is likely going to make this quarter’s call a lot grimmer, but there could be some more exciting moments.

For example, Tesla could go over the launch of the Model Y, which was launched during the first quarter. More specifically, Tesla could release Model Y pre-order backlog, which would be interesting. Though I think they would have already done that if it was significant.

Either way, we are going to have an idea of it through the customer deposit line in Tesla’s earnings.

Tesla could also try to ride the momentum of the many announcements made earlier this week, but I think that’s unlikely, especially when it comes to the Autonomy Day since that was already held for investors and analysts.

Finally, I think Tesla could potentially address a possible capital raise. It’s something that we have been pushing for a while now and while Musk has mostly been shutting down the idea, he appeared to be a little more open to it during the Autonomy Day.

What about you? What would you like to know from Tesla’s earnings? Let us know in the comment section below.