Solar installations more than double in major US metros — where does your city stack up?

Solar capacity more than doubled in 45 of America’s 57 largest cities over the past six years, according to a new study that identifies the top major U.S. cities in solar energy.

Environment America Research & Policy Center released the latest edition of its Shining Cities report, which claims to be “the most comprehensive survey of installed solar photovoltaic (PV) capacity in major U.S. cities.” The report grouped cities into four categories:

When the report started in 2013, only eight cities qualified as “Solar Stars,” but now 23 of 69 surveyed cities have reached the level of 50 or more watts of solar PV per person. The list includes expected warm-weather cities in states like California and Arizona, but also less obvious locales such as Burlington, Vt. (4th per capita), Indianapolis (7th), Newark (16th), Boston (21st), and Hartford (23rd). 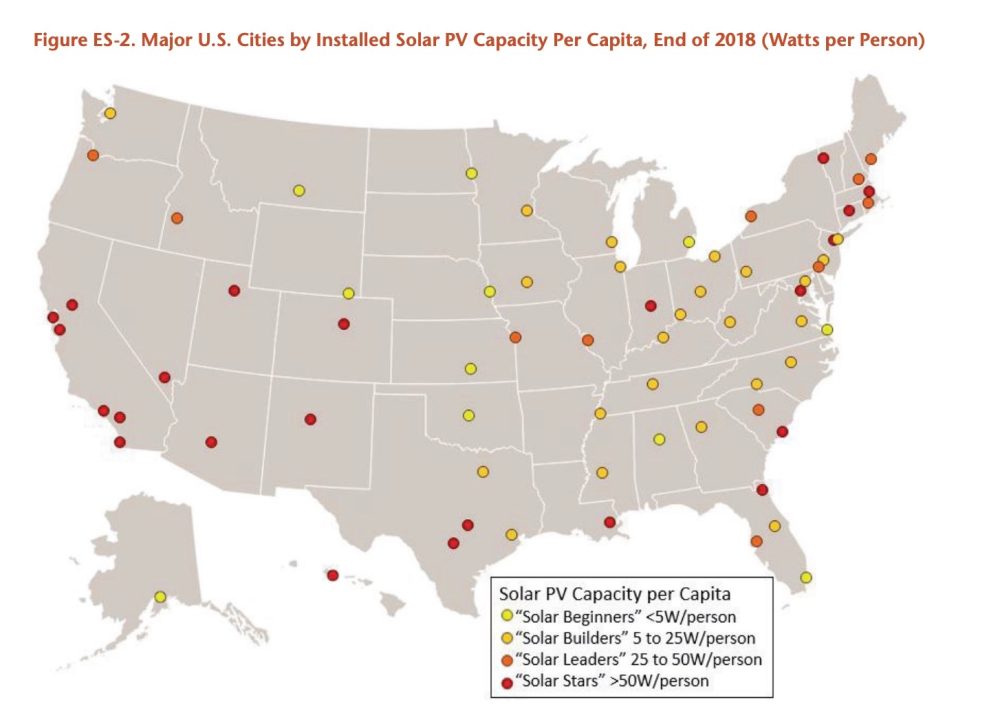 Honolulu, however, is the clear leader with 646.4 watts installed per person, more than doubling runner-up San Diego. Hawaii has committed to 100% renewable energy by 2045. Honolulu Mayor Kirk Caldwell said,

“As mayor, I am proud that Honolulu continues to lead the nation with the highest solar PV capacity per capita. O‘ahu residents are making great use of one of our most abundant resources, the beautiful Hawaiian sunshine. As more residents install rooftop solar to power their homes, heat their water, and lower their energy costs, our city moves closer to achieving the goal of decarbonizing our economy.”

Honolulu is followed by San Diego, San Jose, Burlington and Las Vegas in the top five for per capita solar installations. 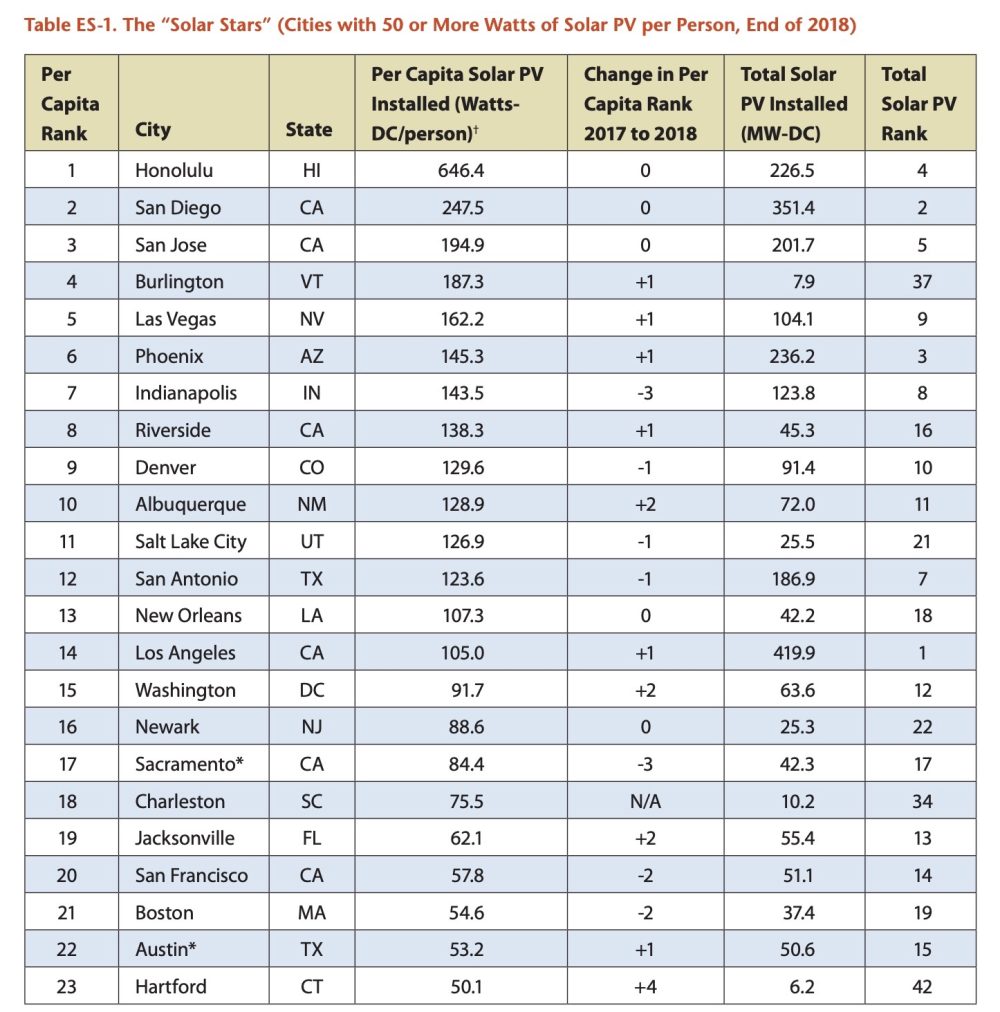 In total solar capacity among cities, Los Angeles tops the list with about 420 MW installed. It’s followed by San Diego, Phoenix, Honolulu, and San Jose. The report notes the top 20 cities on the list “host nearly 3 GW of solar PV capacity — more solar power than the entire country had installed at the end of 2010.”

Despite these notable gains, the report points out that “U.S. cities have only begun to tap their solar energy potential. Some of the cities in this report could generate hundreds of times more solar power than they do today.”

While there are some positive outliers on the list, there are some negatives, as well. Sunny Miami ranked near the bottom of the list in per capita installations (62nd). Since Sept. 2017, the nearby city of South Miami requires solar panels on new homes.

The report outlines a number of policy recommendations on the local, state, and federal levels. Many of the recommendations involve expanding easier access to solar, maintaining or implementing strong tax credits, and setting ambitious solar goals.

Shining Cities 2019 surveyed 69 U.S. cities. The report included the principal cities in the top 50 most populous metro areas in the U.S., as well as the most populous cities in each state not on that list, ensuring that every state was represented.

As the report notes, recent urban solar gains have been solid, but the untapped potential is even greater. A recent report outlined how Los Angeles could do much more with solar energy. Now imagine L.A. and other cities starting to think more along those lines. With strong investments and proper support, these numbers could look small in the near future, as those 2010 numbers look now.