Tesla store caught on fire in Surrey, half the building has been damaged

Earlier today, a Tesla store and service center in Surrey in the UK caught on fire – resulting in half the building being damaged.

The cause is still unknown.

“Firefighters tackled the blaze at the garage in County Oak Way, Crawley after eyewitnesses reported “explosions” and billowing smoke as well as a dozen emergency vehicles. Thomas Ferryman told Surrey Live he heard “many small explosions” erupting from inside the building.”

The West Sussex Fire and Rescue described the fire at the Tesla store as “well alight”:

⚠️⚠️ The Tesla car dealership building in #Crawley is currently well alight. We were called at 10.29am, crews at scene.
Please avoid this busy area.

They eventually managed to control the fire (picture by Eddie Mitchell): 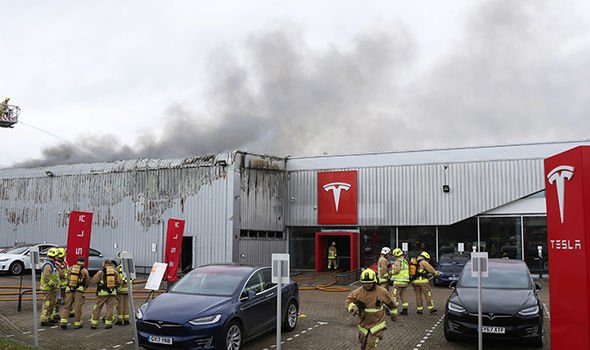 But not before about 50 percent of the entire building has been damaged by the flames and the heat:

“The fire is not going to escalate any further and approximately 50 per cent of the building has been damaged by fire and heat. The incident is going to remain open at the moment but they are scaling down.”

The cause of the fire is still unknown.

A Tesla Spokesperson commented on the incident:

“The fire at Tesla’s Gatwick Service Centre has stopped and we are working with the fire department to learn more about what caused this incident. We can confirm that no Tesla staff or customers were injured or hurt.”

Fortunately, no one was injured.

Update: The fire department has issued an update:

Fire crews have been tackling an accidental fire at a Tesla car showroom in Crawley.

The cause of the fire is under investigation but was not caused by Tesla cars, chargers or batteries. The fire is thought to have started in the storeroom.

West Sussex Fire & Rescue Service (WSFRS) was alerted to the car showroom and workshop in County Oak Way at 10.28am today (2 March) after receiving a number of 999 calls. Crews were greatly assisted by Tesla staff on site.

At its height, eight fire engines including crews from Surrey Fire & Rescue Service, assisted in tackling the fire. An Aerial Ladder Platform was also used.

Adrian Murphy, WSFRS Area Manager for Response, said: “Our fire crews were on the scene within four minutes and found a rapidly spreading fire.

“With the assistance of Tesla staff on the scene and later crews from Surrey, the fire was soon brought under control and at around midday the incident was scaled back.”

Crews managed to contain the damage of the building to 25% with a further 25% being damaged by heat and smoke.

West Sussex Fire & Rescue Service is at the heart of West Sussex County Council’s Communities and Public Protection Directorate, working to support communities to become safer, stronger and more resilient through a combination of prevention, protection and response activities.

That’s one fewer store that Tesla is going to have to close. Just a bad joke, I know it is also a service center and Tesla says it actually wants to expand those.

Based on the significance of the damages, it sounds like a few vehicles caught on fire, but that doesn’t necessarily mean that a car was the cause of the fire.

We will have to wait and see the results of the investigation.