Four states received A grades, while 20 states earned Fs. Massachusetts topped the list with a “Community Power” score of 32 (out of 38). Other “A” states were California, New York, and Illinois. Alabama and Louisiana were last on the list with a total score of 2. 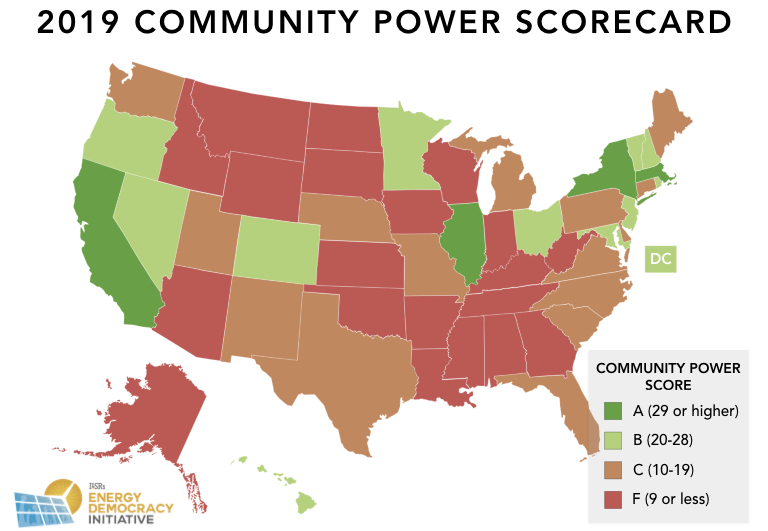 The Community Power Scorecard isn’t specifically focused on green energy. But it still offers some insight into which states are making it easier for residents to make their own energy choices, and much of that is tied to renewables. Check out the blog post for a state-by-state breakdown.

A House Natural Resources subcommittee held a hearing on climate change (its first hearing of the year) — and Republicans successfully forced a motion to adjourn cuz not enough Dems showed up.

Talk about growing pains for the new majority!

The report comes from Belgium’s VRT NWS (translated). Researchers from Belgium’s KU Leuven say that 15 percent of the sunlight taken in by the panel is converted directly into hydrogen gas, which can then be used to power a home or a hydrogen car.

The panels were in development for 10 years. The researchers say they’re ready to test a prototype of the panel out in the field, on an actual house. It’s unclear how much these panels would cost, but the researchers believe they would be affordable. They also seem to believe that, if field testing is successful, the effect could be revolutionary.

In 2018, the wind energy industry installed 51.3 GW of new capacity, according to the Global Wind Energy Council. It’s a 3.6 percent decrease from 2017, when 53.2 GW of capacity was installed.

In total, installed wind capacity reached 591 GW by the end of last year. That’s a 9.6 percent overall increase compared to the end of 2017. Furthermore, the global wind industry has installed at least 50 GW of new capacity every year, showing continued stability.

“2018 was a positive year for wind in all major markets, with China leading both onshore and offshore growth. We expect huge growth in Asia through the coming decade and beyond as part of the continuing shift from Europe to Asia as the driving region for wind development.”