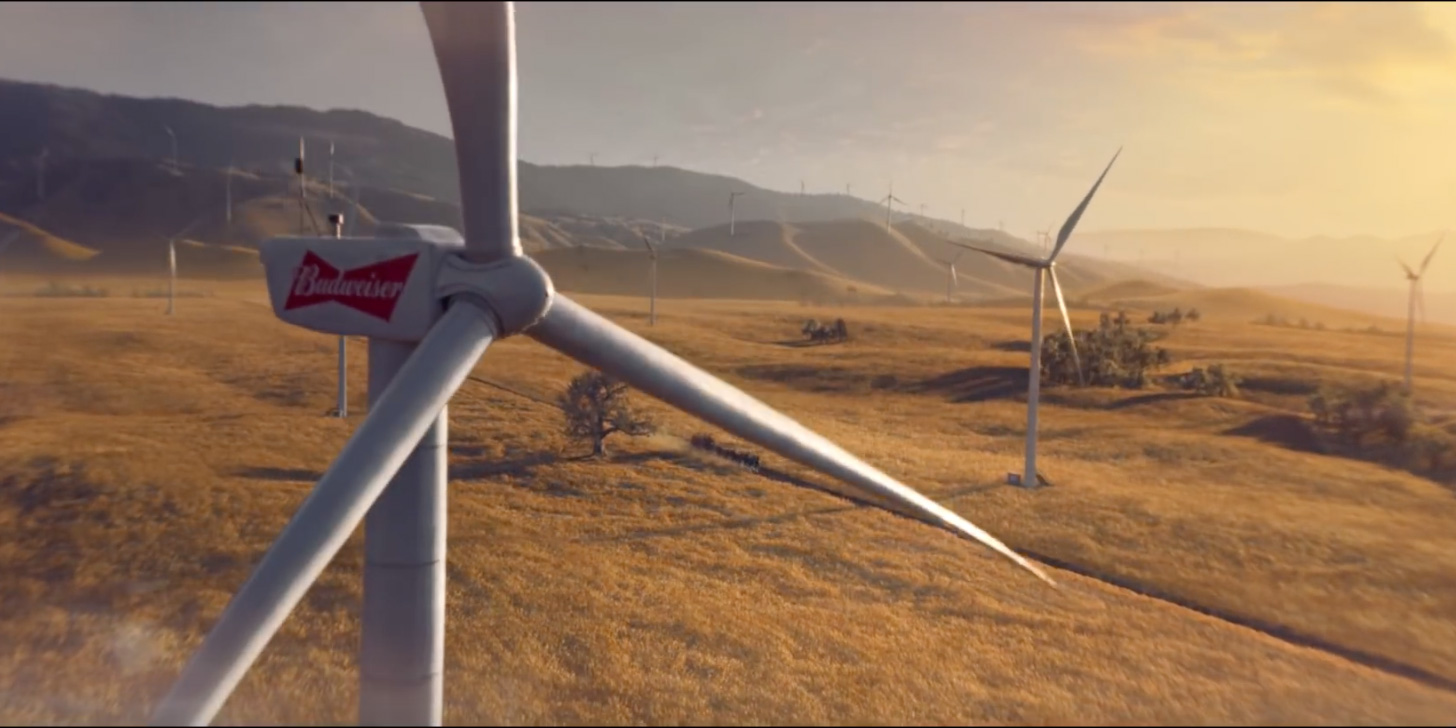 Budweiser’s Super Bowl ad is ready for its debut this coming Sunday. The commercial focuses on Bud’s use of wind power, noting that Budweiser is now brewed with 100 percent renewable electricity from wind power in the U.S.

Can’t wait for the big game? You’re in luck, because Budweiser already posted the full commercial on YouTube below.

The ad, titled “Wind Never Felt Better,” features a Dalmatian riding a beer wagon pulled by Budweiser’s Clydesdales, set to Bob Dylan’s “Blowin’ in the Wind.” The camera then pulls away to reveal a number of wind turbines. The brand boasts that its beer is “now brewed with wind power for a better tomorrow.”

Budweiser’s willingness to use the Super Bowl stage to emphasize its commitment to renewable energy is certainly welcome, but it’s not a surprise. Bud’s parent company, Anheuser-Busch, has set a goal to brew all of its beer worldwide with 100 percent renewable energy by 2025. Anheuser-Busch also ordered 40 Tesla semi trucks in 2017, and it plans to use those trucks for shipments within 150-200 miles of its U.S. brewery locations.

GE announced Wednesday that it “intends to intensify its focus on the growing renewable energy market by consolidating all of the company’s renewable and grid assets into a single, simplified Renewable Energy business.”

With this announcement, GE plans to move its grid solutions and hybrid renewables into the GE Renewable Energy Business. There, it will join with its existing offshore wind, LM Wind Power, hydro, and newly-streamlined onshore wind offerings.

A strategic realignment, GE claims these moves will improve performance and “drive more local and integrated solutions.” GE Renewable Energy “will be capable of supporting customers from project development, to equipment and services, to full turnkey solutions.”

It’s unclear what effects the consolidation will have on GE’s workforce, both worldwide and locally. For instance, The Daily Gazette of Schenectady, NY, reported that “GE would not address the question of any possible job cuts in Schenectady because of the changes.” GE’s stock surged on Thursday after strong Q4 sales were announced.

Germany added nearly 3 gigawatts of new solar power in 2018, the Associated Press reports. Bolstered by lower prices for new solar systems, it marks an increase of 68 percent over 2017.

Earlier this year, reports noted that renewables became Germany’s main energy source for the first time in 2018, passing coal. The country plans on shutting down its remaining nuclear power plants by 2022. It also plans on closing all coal-powered plants by 2038.