Tesla is launching a new version of its HEPA air filtration with Bioweapon Defense Mode as an aftermarket upgrade for older Model S and Model X vehicles.

With the Model X, Tesla put a lot of effort into developing a more powerful air filtering system in order to not only contribute to the reduction of local air pollution with electric vehicles but also to reduce the direct impact of air pollution on the occupants of its vehicles.

Musk credited Google co-founder Larry Page for turning him onto the idea and with the Model X in 2015, Tesla introduced a brand new HEPA air filter system.

The automaker claims that it is about 10 times larger than a normal car filter (pictured above) and it is “100 times more effective than premium automotive filters” as it removes “at least 99.97% of fine particulate matter and gaseous pollutants, as well as bacteria, viruses, pollen and mold spores.”

Two years ago, Tesla briefly offered the product as an aftermarket upgrade for the Model X.

It has become an important feature in markets where air pollution is bad.

The air filtration has proven especially useful in California with the recent wildfires creating extremely bad air condition in many regions.

In November, Musk authorized Tesla employees to provide assistance for the California wildfires and ‘not worry about payment’.

“Upgrade your Model S with HEPA Air Filtration for the freshest cabin air available. This package includes Bioweapon Defense Mode firmware as a feature of the HEPA system, and comes with a new HEPA filter.”

Here are a few images of the new upgrade for Model S: 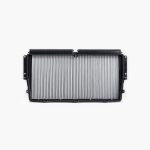 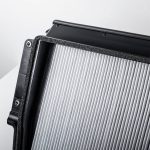 The new upgrade is $500 installed for Model S or Model X, which is $250 cheaper than the previous version for Model X.

For Model S vehicles, it can only be installed for vehicles with the new fascia, which was introduced in April 2016.

Unfortunately, it’s not available for Model 3 because of the size of the air filter being too big for the vehicle.

Musk recommends some air climate settings for Model 3 owners to get the best air quality possible if they are driving in areas with bad air pollution:

“Set air flow to recirculating mode and manually raise blower speed to 5 in Model 3 for best air quality. Air filters are smaller than Model S/X, so clear air is achieved by circulating through filter several times.”

The suggestion is also presumably good for older pre-2016 Model S owners who can’t get the upgrade.

I’m jealous. I have two Tesla vehicles and none of them can have the HEPA air filtration with Bioweapon Defense Mode.

But I do appreciate Elon’s suggestion for climate settings when air pollution is bad.

It would be cool if they could make it into an actual mode that would be easy to activate:

@elonmusk It would be cool to make your climate setting suggestion for air quality in Model 3 as an actual climate mode for Model 3 & older Model S that can't get this upgrade. Something that could be activated by voice control & through climate settings https://t.co/B8SPNmSWbX

I think it’s smart for Tesla to focus on the air quality inside its vehicles. That way, they are addressing both air pollution in general by accelerating the advent of electric transport and directly how it affects their owners with air filtration inside their cars.