Weekend project: How to build your own DIY 40 mph fast electric bicycle

Electric bicycles is a booming industry. It seems like every week we hear about another new model entering the market. Outside of a few exceptions, most electric bicycles fall in the 15-28 mph (25-45 km/h) range. That’s fine for pleasure riding, but it leaves many enthusiasts looking for more speed.

Additionally, please check your local laws to determine if a fast electric bicycle is legal in your area. Depending on local laws, this could be an “on private property only” project, or may require adding mirrors and lights before registering as a moped or light motorcycle.

Lastly, there are multiple safety advisories peppered throughout this article. If you plan to build a fast electric bicycle, please pay attention to every safety advisory.]

Choosing a donor bike for a fast electric bicycle

Component choice is critical, as this is what will make your e-bike safe and effective.

I’m using a Motobecane Jubilee FS bike, which costs around $600. This is a nice balance between a full suspension bicycle that has high enough quality to be safe, while not breaking the bank with a $2,000 bike. One component I would have liked to have on this donor bike is hydraulic brakes, which would be nice for stopping at these speeds. But decent Shimano hydraulic brakes can be found for around $70 to add to any bike. 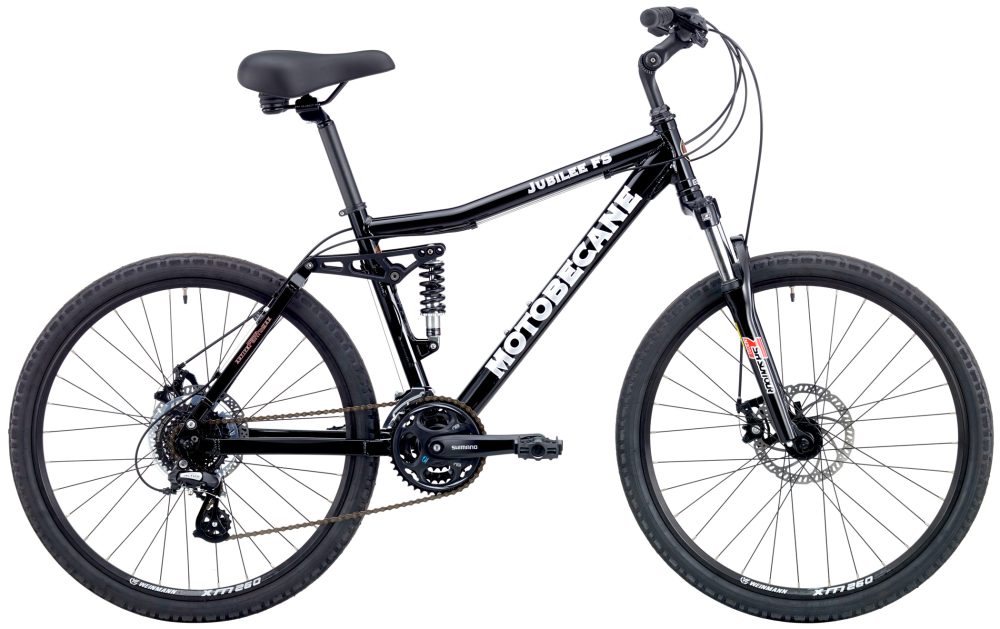 Another good option would be to start with a used downhill bike. Downhill bikes are built to handle extreme terrain and thus make great high speed electric bicycles. A used downhill bike will still be high quality, but won’t have the same high price tag.

A quick note about donor bikes: no bicycle brand will condone you turning their bike into an electric bicycle. Each will have some generic statement about how this voids their warranty and the bikes weren’t designed for such applications. This is definitely true, any sort of tinkering will void your warranty. However, if you start with a high quality bicycle, you can still build a safe machine. High quality mountain bikes were built to handle speeds over 40 mph because you can easily hit those speeds on hills, though you may want to upgrade your brakes if you’ll be sustaining such speeds. The frames are rugged because they are meant to bounce off boulders and tree roots while racing down mountain trails. Thus, 40 mph on a smooth street is definitely within the design tolerances of a good quality mountain bike. Yet another reason not to use a cheap department store bike.

In the video below I show the bike I chose, then I demonstrate the building process and test out the final e-bike.

Electric bicycle conversion kits contain all the bolt-on parts you’ll need to convert a standard bicycle into an e-bike.

For my fast electric bicycle though, I am going to choose a 1,500 W kit from West Coast Electric Cycles, based in Washington. For a kit that requires such speeds, I feel more confident buying from a local company with a good reputation. I spoke with WCEC’s owner Barent Hoffman about my project goals, and he helped me find the right kit as well as the Motobecane donor bike. Barent has been building fast electric bicycles for years, and stocks crazy high power kits at WCEC. The 1,500 W kit I’m using is actually the tamest of his options. Many of his customers are electric bicycle racers.

Also, note that I chose the 4T version of the motor, which is faster than the 6T at the cost of a slight torque reduction.

The kit is more expensive than cheap alternatives on eBay and Amazon, but the difference in quality is important at these speeds and power levels. The controller uses high efficiency, low heat mosfets to prevent burning out the controller. The battery uses high power cells that won’t overheat under load. The kit even includes expensive accessories such as the Cycle Analyst meter (which costs more than some electric bike conversion kits alone).

It also includes custom designed torque arms that fit the Motobecane Jubilee FS bike. Torque arms are a critical piece of safety gear at these power levels. They hold the axle of the motor firm and prevent the extreme torque from causing the axles to spin in the bike’s dropouts. 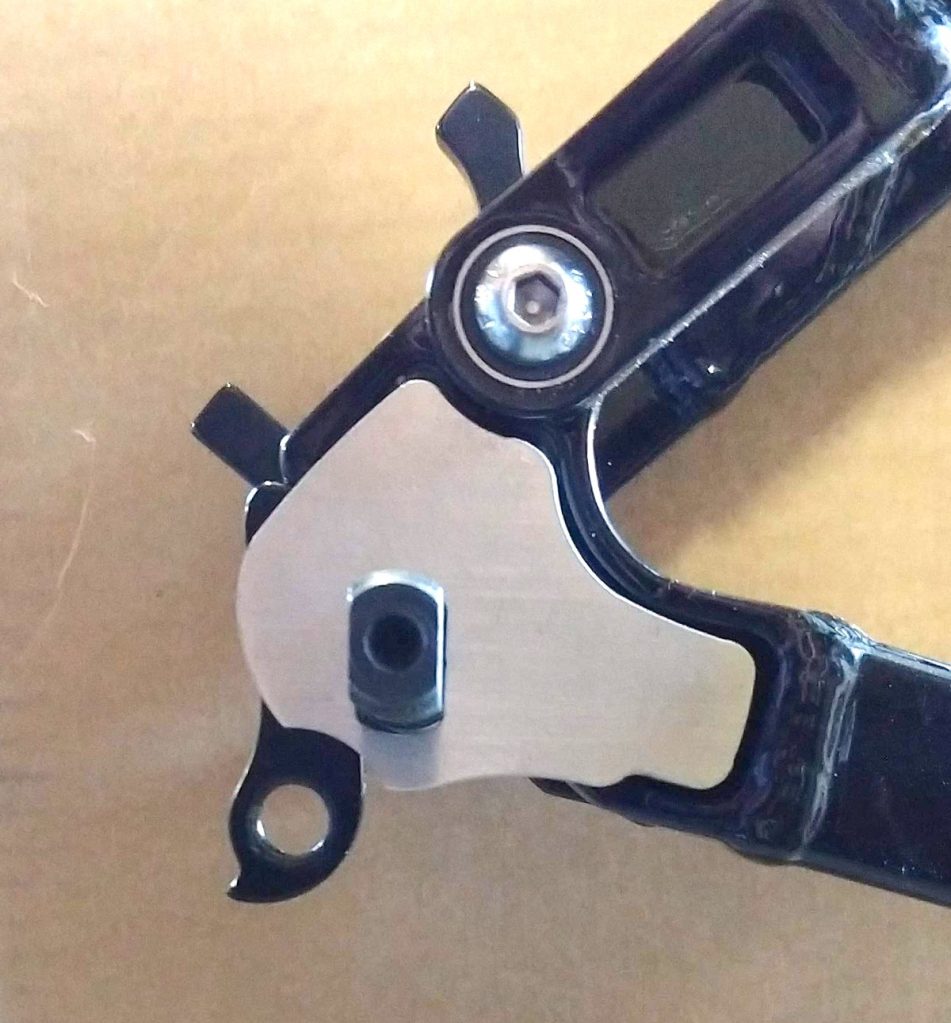 Assembly is actually fairly straightforward, since all of the parts were specifically designed to mount to a donor bicycle.

A bicycle stand is helpful here, but if you don’t have one (don’t worry, I don’t either) you can simply flip the bike upside down.

Start by removing the rear wheel, then transfer the tire and inner tube over to your hub motor wheel. Make sure you transfer the disc brake rotor as well. Then install the freewheel gears by screwing them onto the threads on the motor housing. Do this slowly so you don’t cross thread them. 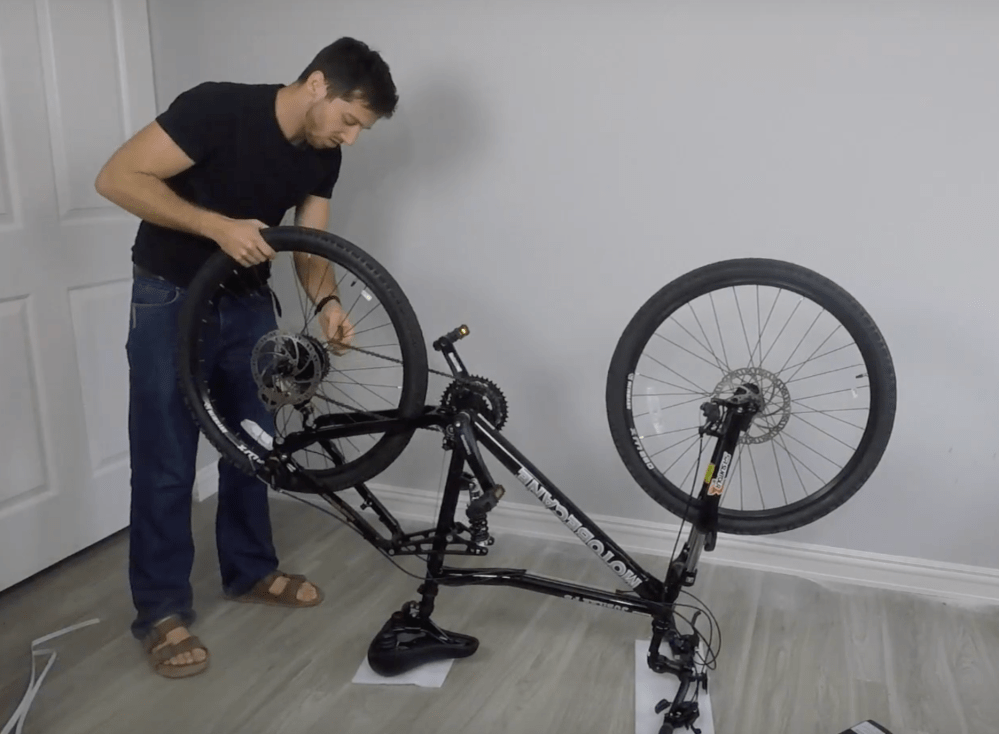 Then you can place the motor wheel into the rear dropouts. You might have to adjust your disc brake calipers if they don’t line up with your motor. Fortunately, the Motobecane Jubilee FS and the motor from WCEC line up perfectly, so no adjustments to the brakes were necessary.

Now add the torque arms on each side of the motor. Helpfully, they come marked for right and left side. Then tighten down the axle nuts, securing the motor in place.

While the bike is still upside down, I’d recommend installing the controller under the down tube. I put mine just forward of the pedals so it is mostly obscured and hard to see. Again, feel free to watch the video above to see a more detailed demonstration of the installation process.

Now you can flip the bike back over so it is standing on its tires again. At this point, you’ll want to install the battery. Remove the locking plate from the battery and place it on top of the down tube. Ideally, you’d use the water bottle bolts to bolt it to the frame. However, on this particular frame, the water bottle bosses are too low, so they don’t line up with the holes in the mounting plate. 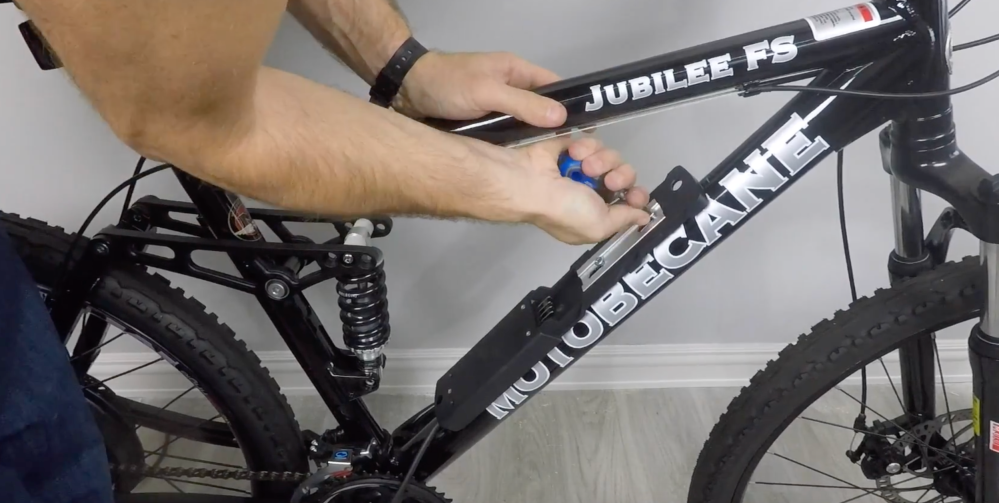 Instead, I drilled two small holes and screwed the plate to the frame.

Quick engineering note here for anyone freaking about drilling into their frame: The down tube is a frame member that is loaded in tension. That means that when the bike is in use, that tube is being pulled from the ends. Two small screw holes are not going to measurably impact the down tube’s load limit in this type of loading. The frame is also overbuilt here, which is part of the reason why there are already holes in it for screwing in a water bottle holder. Round holes also produce the lowest stress riser. If this frame member was undergoing a bending moment, then creating a stress riser could be more problematic. However, based on the loading orientation and the fact that these bikes are built for this purpose, drilling a small screw hole in this location is not dangerous. However, that doesn’t mean you should go cutting chunks of your frame out. Stick to two small screw holes.

Once the battery is in place, you can add the Cycle Analyst meter to the handlebars, and slide the throttle assembly onto the right handlebar. If you’d like to use the pedal assist sensor, you can also add it to the bottom bracket. However, since I plan on using the bike more like a light electric motorcycle, I just skipped the pedal assist sensor. A throttle is all I need, but I can still pedal when I want to help out. Lastly, you’ll connect all the wires. Fortunately, each connector is a unique size and can only connect to the controller in one location. The motor, Cycle Analyst, throttle, speed switch, on/off switch and battery wires will all be connected. I used cable ties to secure the wires to the frame and neaten-up the installation a bit.

At this point, turning on the battery’s power switch and pressing the “ignition” button on the throttle should cause the Cycle Analyst meter’s screen to boot up, and you’ll be rewarded with your new fast electric bicycle that is ready to ride. You’ll probably want to charge the battery up fully before your first ride though.

After charging up your battery, take your new e-bike out to a clear paved area. If fast electric bicycles are not legal on public roads in your area, you’ll have to stick to private property. Try to find a friend that owns an abandoned airport runway or something similar. Easy peasy, right?

Set your speed selector switch to the lowest setting, which is the far right position on the WCEC kit. Turn on your e-bike and start by simply pedaling. Test your brakes first at low speed. If everything checks out, give it a little more throttle. With the WCEC kit, I could get up to around 28 mph (45 km/h) in the lowest speed setting. Start slow and listen for any strange sounds. Pinging could indicate something rubbing against the wheel or spokes, such as a cable tie end or loose wire.

Continue to inspect your bike at low speeds until you are confident that it is working well. At that point, slowly progress in speed through the higher speed settings while continuing to pay careful attention to the bike’s response. Your brakes may take some time to work in as the pads and rotors grow accustomed to each other, so don’t gun it right away.

Remember to always pay careful attention to your surroundings, especially when on public roads. You should also consider wearing special riding equipment such as a protective jacket, gloves and pants. At the very least, wear a helmet. A bicycle helmet might keep your head from opening up in the event of an accident, but a full face helmet will keep your face from looking like a pizza.

If you want to hit commuting speeds but prefer a more substantial two-wheeled vehicle underneath you, maybe consider an electric scooter or moped. They’ll cost a bit more than a DIY e-bike solution, but they’ll usually be street legal without modification and certainly have a more comfortable ride!