VW’s passenger cars and its commercial vehicles are often sharing technology and we have several examples here for electrification.

The most interesting one is a cargo version of the I.D. BUZZ, an all-electric microbus that VW plans to bring to production in 2022.

Interestingly, VW says that the cargo version could come sooner – around 2021.

Here’s what VW released about all the new vehicles including the I.D. BUZZ CARGO:

The transporter concept being presented at the IAA Commercial Vehicles in Hannover (20 to 27 September) is a progressive sibling of the I.D. BUZZ. That concept, which was presented in 2017 in Detroit, enthused people around the globe and will go into production starting in 2022. The new I.D. BUZZ CARGO was designed to be just as close to production level. The I.D. BUZZ was developed jointly by Volkswagen Commercial Vehicles and Volkswagen Passenger Cars. Volkswagen Passenger Cars focused on the van (people carrier) and Volkswagen Commercial Vehicles on the cargo version. Both models are members of the I.D. Family – a new generation of fully connected electric vehicles delivering the ranges of today’s petrol vehicles, a progressive design-DNA and impressive space. Another key unique selling point of the I.D. Family is the scalability of its batteries. The models can be delivered with different battery sizes according to the vehicles purpose of use and budget. And this applies also to the future I.D. BUZZ CARGO, which like all models in the I.D. Family is based on the Modular Electric Drive Kit (MEB). With the MEB it is possible – dependent on battery size and the model concerned – to achieve ranges of about 330 to over 500 km (as per WLTP).

This concept vehicle shows how Volkswagen Commercial Vehicles is launching into the new era of electric mobility. Back in August, the company already presented the brand’s first all-electric van with the world premiere of the new e-Crafter. While the e-Crafter launched as a panel van with an overall length of 5,986 mm and a maximum payload of 1.75 tonnes, the I.D. BUZZ CARGO concept is positioned in the size class beneath the Crafter. The payload (maximum load) of the concept vehicle is 800 kg; the I.D. BUZZ CARGO is 5,048 mm long, 1,976 mm wide and 1,963 mm tall. Its wheelbase measures 3,300 mm. By the way, the rear overhang was extended by 106 mm, making the cargo version of the I.D. BUZZ significantly longer than the van shown in Detroit.

Outside, the I.D. BUZZ CARGO concept is differentiated from the people carrying version by a new solar roof, wide-opening rear wing doors and a new rear bumper. With a view towards optimising utilisation of the cargo space with shelving systems, there is no sliding door on the driver’s side – and this is typical of transporters. The front doors and sliding door open electrically. Unlocking the vehicle from the outside is activated via a sensor solution. The I.D. BUZZ CARGO recognises authorised persons via a digital key which is sent to the van from a smartphone. Instead of the 22-inch wheels of the Detroit concept vehicle, new 20-inch wheels are used with size 235/55 tyres. With these specifications, the I.D. BUZZ CARGO meets the requirements of a utility-oriented transporter – but in this case with a progressive type of design.

The solar module on the roof fits into this picture. The photovoltaic system generates so much energy that it is able to extend the range of the I.D. BUZZ CARGO by up to 15 km a day. So the longer the concept vehicle stands in the sun, the further it can drive later. 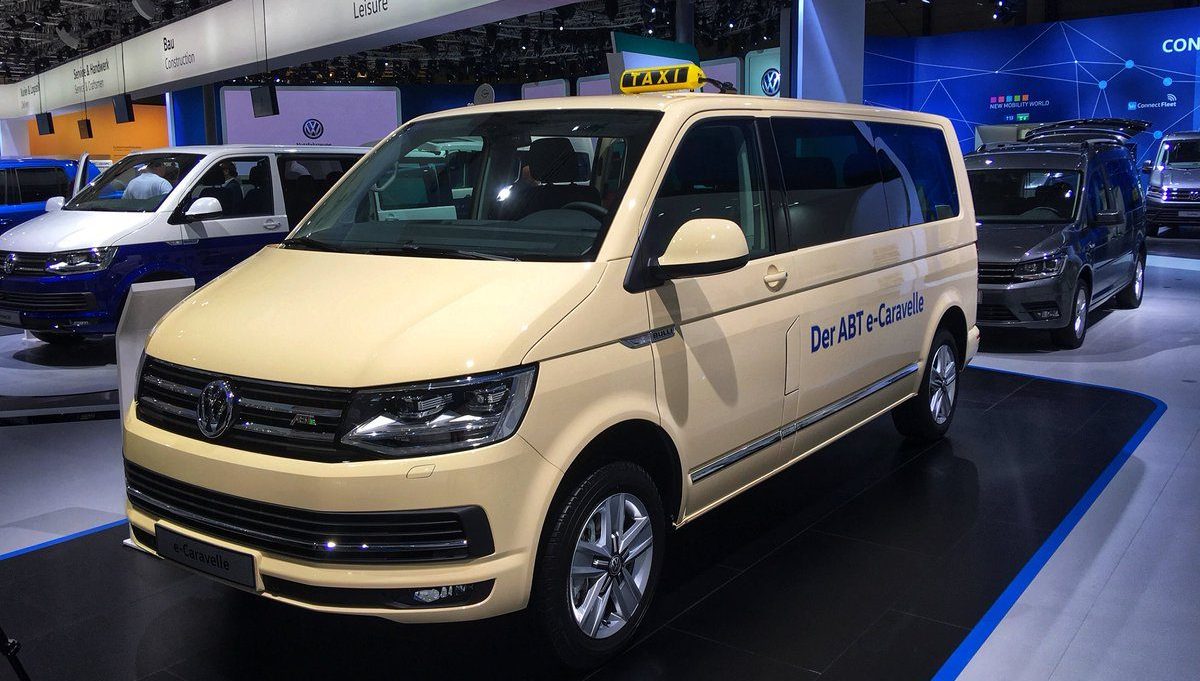 Volkswagen Commercial Vehicles has offered its Transporter model series for eight decades. Now the brand is connecting the best-selling vehicle’s drive system with electricity: in the world premiere of a taxi concept – the ABT e-Transporter. This concept car, designed together with the company Abt e-Line GmbH, is a zero-emission van designed to generate electricity at IAA Commercial Vehicles. The battery system of the ABT e-Transporter is constructed to be scalable so that it can satisfy the needs of a wide variety of potential applications and budgets in a possible production model. In its base configuration, the Transporter comes with a lithium-ion battery that has an energy capacity of 37.3 kWh; the second battery version offers an energy capacity of 74.6 kWh. Driving ranges of the two versions are between 208 and 400 km. 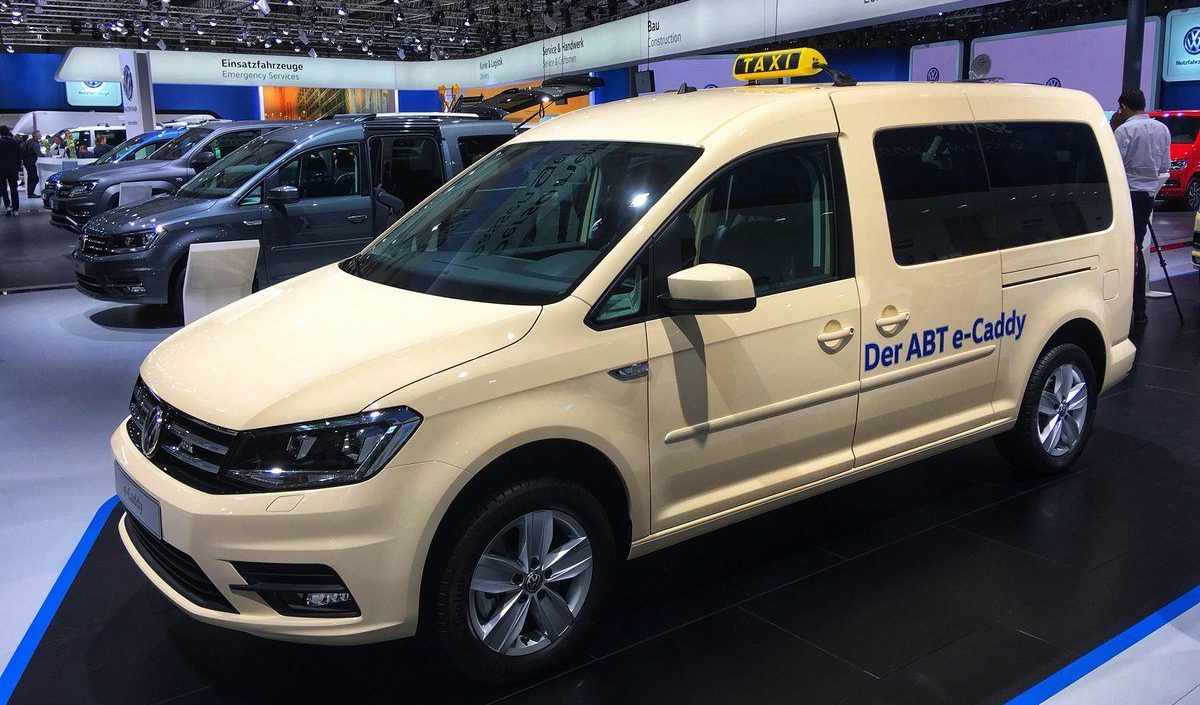 The second model designed jointly by Abt e-Line GmbH and Volkswagen Commercial Vehicles is the ABT e-Caddy, which is also being shown in a world premiere at the IAA. It will arrive on the market in the middle of next year. Volkswagen Commercial Vehicles is also presenting the ABT e-Caddy as a taxi, and for good reason: it is based on the extended Caddy Maxi and therefore offers ample space for five people plus luggage. With a range of up to 220 km (forecast NEDC figures), the zero-emission vehicle has been ideally tailored for urban use in the environmental restriction zones of European cities. An 82-kW electric motor operates in the ABT e‑Caddy. The electric motor is supplied with electricity from a lithium-ion battery. Energy capacity: 37.3 kWh. The ABT e-Caddy, which has a top speed of 120 km/h, will be one of the most spacious electric vehicles in its class with a cargo compartment volume of 4.2 m3. 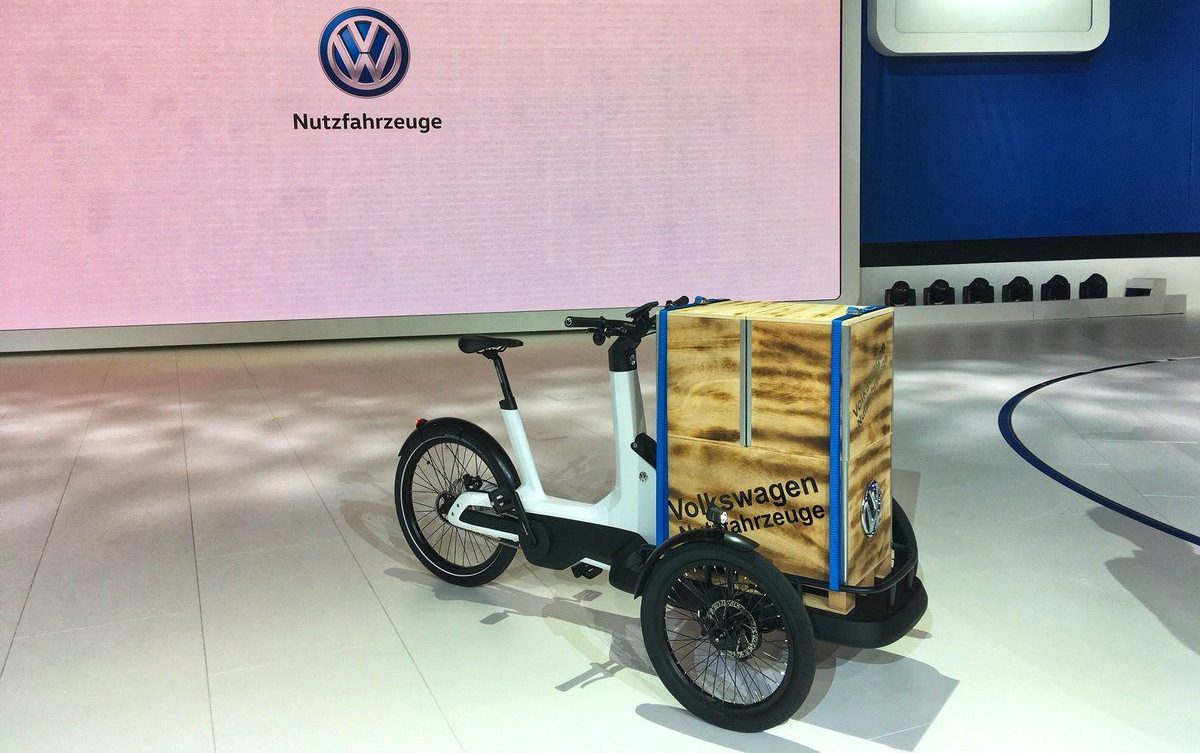 Volkswagen Commercial Vehicles is also writing history at IAA 2018 with the brand’s first electric bike: the Cargo e-Bike – a “last mile deliverer” that is the most advanced of its kind in the world. Market introduction of the three-wheel cycle will be in 2019. The Cargo e‑Bike is a pedelec (pedal electric cycle) that adds power assistance to its rider’s pedalling with a 250 Watt (48V) mid-mounted motor at speeds up to 25 km/h. Advantages of a pedelec: It can be used anywhere, even in pedestrian zones. Energy for the electric motor is supplied by a lithium-ion battery. The drive and rugged architecture of the cargo bike are designed for a maximum payload of 210 kg (including rider). This vehicle – the smallest Volkswagen commercial vehicle ever – is equipped with two wheels at the front, with the load platform positioned low between them. Mounted on this load platform is a cargo box with a storage volume of 0.5 m3. Innovative kinematics of the front axle ensure that the goods being transported on the load platform do not tilt with the cargo bike when cornering, rather they remain horizontal and thereby stable. This tilt-levelling technology is an innovation. The new electric Cargo e-Bike will be produced at the Volkswagen Commercial Vehicles plant in Hannover.