Waymo has been working with a group of early riders in its test program in the Phoenix metro area for over a year and it is learning how they use their autonomous ride-hailing service.

Building on what they learned, Waymo is now announcing new partnerships to help riders better make use of their autonomous service, including a partnership with Walmart.

Waymo’s fleet of test vehicles across the U.S. is now driving more than 24,000 miles daily, many of them with actual customers in Phoenix.

The Alphabet company commented on the most common uses of its service in the Phoenix metro area:

“We know from our early riders that most of their rides are to run errands, shop for groceries, commute to work, head to dinner or fix their personal vehicles.”

Commute to work is actually the most popular use of their service. It is followed by going to restaurants, school, and then a variety of different shopping and errands.

Waymo produced this infographic about the early rider program: 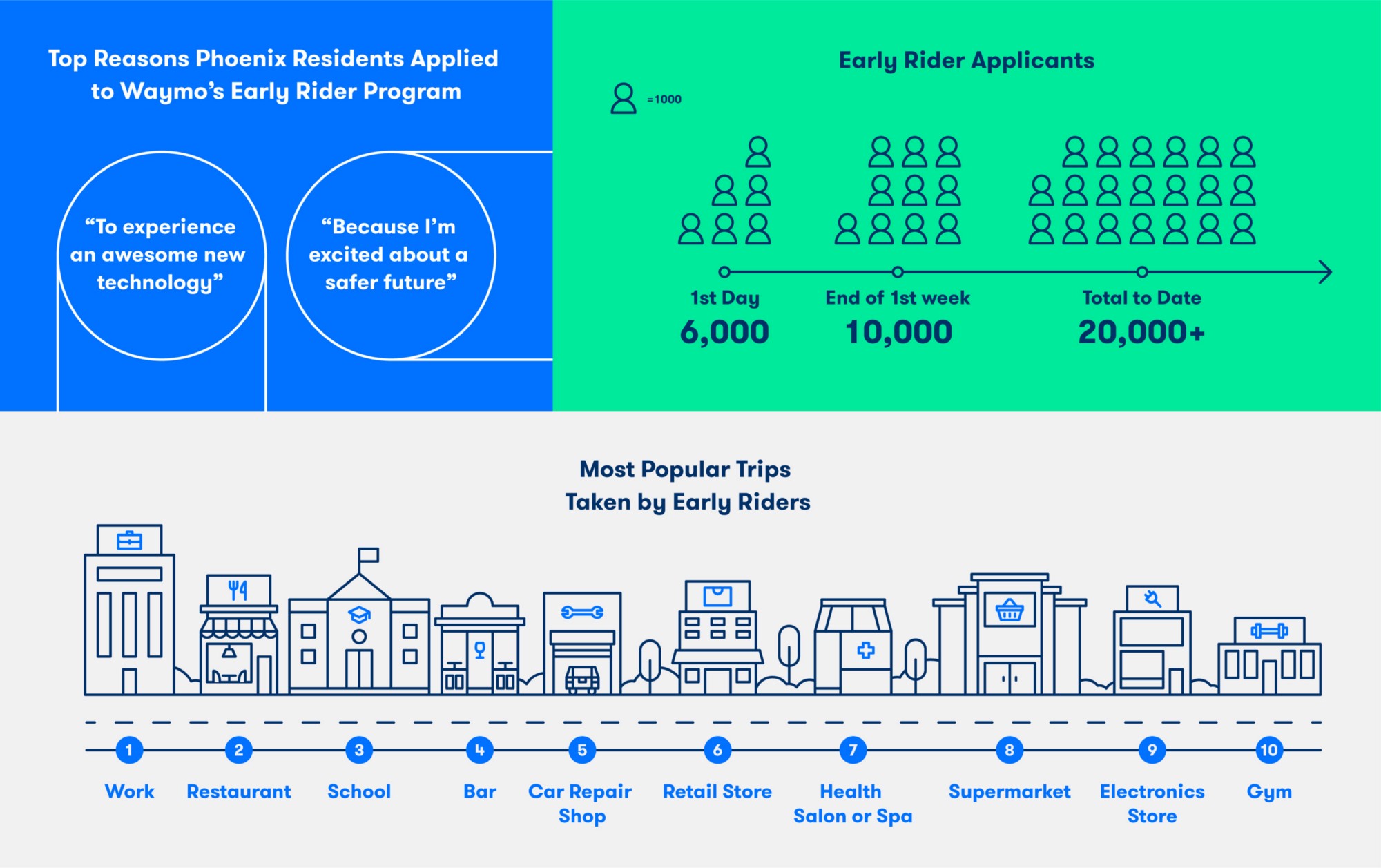 While Waymo’s service can take you from point A to point B, there is also a lot to be done to make the experience better at the destinations.

For example, Waymo wrote in a blog post last month:

“In Arizona’s sunny high temperatures, nobody wants to carry grocery bags a block down the street. We’re working to give our vehicles the smarts to arrive as close as possible to the best exit doors wherever our riders want to go.”

It’s why they are announcing a new partnership with Walmart.

The company wrote in a press release today:

“Later this week, Walmart and Waymo will launch a test pilot that gives early riders savings on groceries each week when they are ordered on Walmart.com. While orders are being prepared at the store, Waymo vehicles will transport the rider to and from Walmart to collect their groceries.”

That way, riders won’t have to wait for a car to come by. They can just arrive, pick up the groceries, and go back home in a Waymo autonomous van.

Along with the partnership with Walmart, they announced a series of other partnerships in the Phoenix metro area:

For those who want to visit Ahwatukee Foothills Towne Center in Chandler, DDR will offer shoppers and diners rides in our self-driving vehicles, letting them avoid the stress of parking lots.

Our self-driving cars will also become an integral part of the VIP experience for visitors in Phoenix. Waymo and the Element Hotel in Chandler have teamed up to give select guests access to Waymo vehicles, for example, business travelers who need to commute to and from the office during their frequent stays, giving them a chance to experience fully self-driving technology.

Finally, we are expanding our existing partnerships with AutoNation and Avis Budget Group.  AutoNation, who already helps Waymo service and maintain our vehicles in Phoenix, is now making it possible for their customers to ride with Waymo technology; while customers are having their personal vehicles serviced, AutoNation will now offer them a Waymo, rather than a loaner car, to get around. Avis Budget Group, who makes sure our vehicles are charged, refueled, and presentable for riders, will also soon provide Waymos as a last mile solution for Avis customers in Phoenix to help them pick up or drop off their rental cars, beginning with their two Chandler locations. Avis and AutoNation are ideal partners, providing different and complementary support and maintenance services to our growing fleet of self-driving cars in Phoenix over the past year and ensuring they are always ready to pick up a rider.

Waymo also says that those partnerships will serve as pilot programs for future partnerships in other regions as the company expands its autonomous ride-hailing service in other markets.

The company previously said that it plans to officially launch the service in Phoenix beyond its early rider program later this year.