With leaked emails from Elon Musk on Monday, we first revealed that a Tesla employee had sabotaged software in the automaker manufacturing system and stolen data.

Now things have escalated as Tesla has sued the employee, Martin Tripp, and Tripp is attacking Tesla in the media in return.

As we reported yesterday, Tesla filed a lawsuit against Tripp after starting to get an understanding of the extent of his hacking and theft of documents discovered on Monday.

Tesla has accused him of hacking into its system from the workstations of his coworkers, presumably to hide his trace, and then sending the data to third parties and misrepresenting some of the data to media.

Now Tripp is firing back in the media claiming to be a whistleblower.

I am being singled out for being a whistleblower. I didn’t hack into system. The data I was collecting was so severe, I had to go to the media,

CNN reported that media outlets had “yet to do a story about it,” but now that we have a better idea of the information that he obtained, it sounds extremely similar to stories published by CNBC and Business Insider over the last few weeks.

Tripp is now going on a media tour trying to push his side of the story.

He gave the Washington Post a screenshot of an email exchange he had with Musk in which he appears to be threatening him: 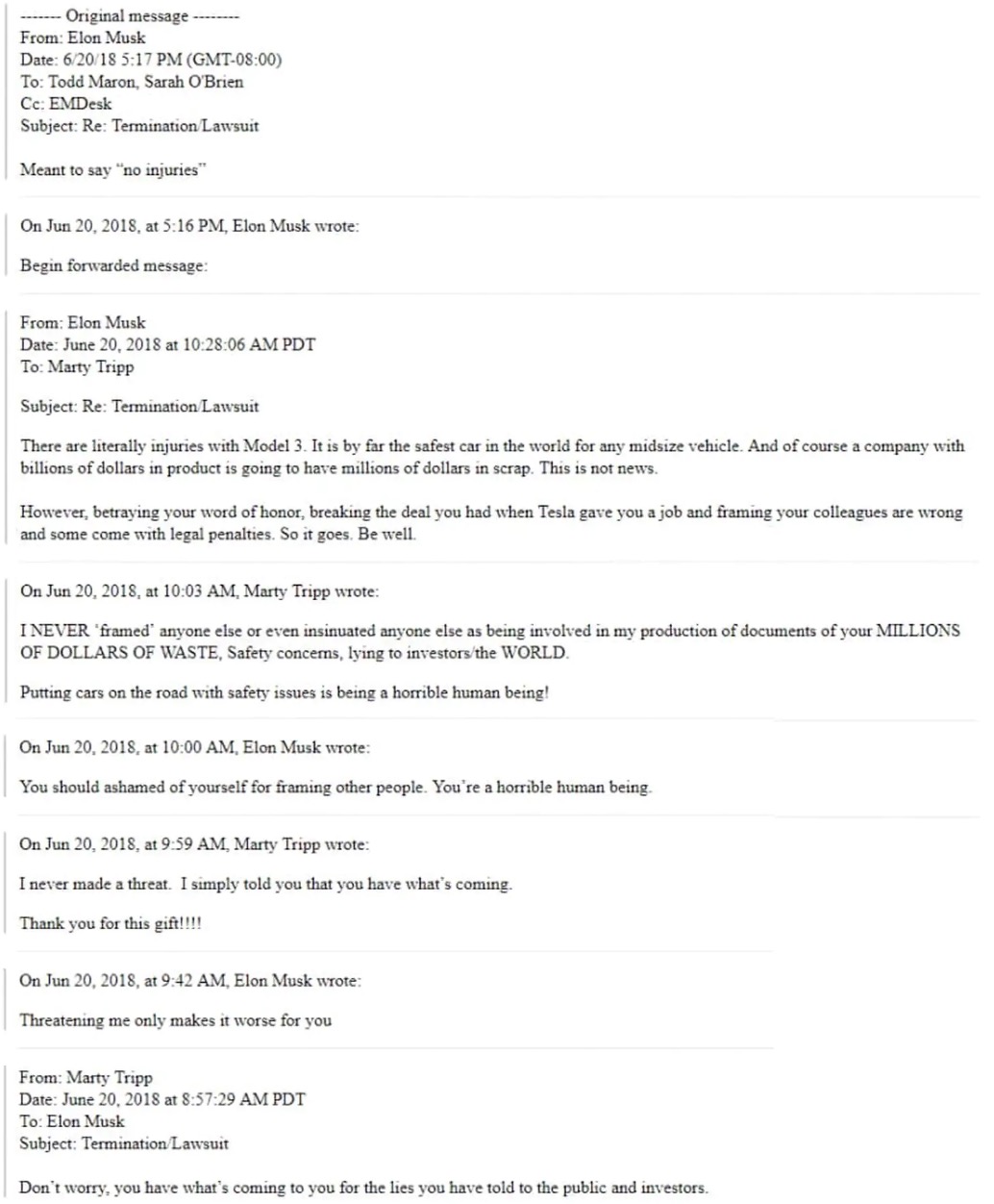 Things get crazier. Tesla said that a friend of Tripp told them that he was threatening to shoot up the Tesla Gigafactory 1 (via CNBC):

Yesterday afternoon, we received a phone call from a friend of Mr. Tripp telling us that Mr. Tripp would be coming to the Gigafactory to ‘shoot the place up.’ Police have been notified and actions are being taken to enhance security at the Gigafactory.

The local sheriff department responded to the potential threat.

They issued a statement saying that they found no credible threat but they are still investigating:

On 06/20/18 the Storey County Sheriff’s Office received information of a potential threat to the physical security of the Tesla Gigafactory. Deputies responded to investigate the potential threat.

After several hours of investigation deputies were able to determine there was no credible threat. Further investigation into the threat’s origin continues. No additional information concerning the ongoing investigation will be released until it’s [sic] conclusion to protect the investigative process.

The names of all involved parties are being withheld pending the completion of the investigation.

It’s certainly turning into a ‘he said/she said’ situation, but it is also certainly not looking good for Tripp.

Regardless of the possible terror threats, I don’t see how he thought it would be a good idea to not only send that email to Musk but also leak it to the media thinking he is coming out of it looking good.

On top of it, it now looks like he is clearly admitting to everything, but he claims that he is doing it as a whistleblower.

But as Musk explained in the email, what he is blowing the whistle on is fairly insignificant.

Business Insider had already reported on the alleged waste – seemingly based on information leaked by Tripp, but the story was debunked as it didn’t explain how the waste is any more significant or mismanaged than any other plant of this size.

If you want my opinion, the guy sounds like your average social media Tesla hater. Reading those emails, I can almost see the Twitter handles of the most notorious Tesla bashers out there.

Also it is interesting CNBC’s Lora Kolodny, who likely used Tripp as a source for a series of scathing pieces on Tesla, isn’t mentioning that fact in the current reporting of his “shooting up the place”. No retractions or updates to those stories have been made.

But that’s just my two cents based on what has come out so far.

What about you? What do you think of this weird situation? Let us know in the comment section below.