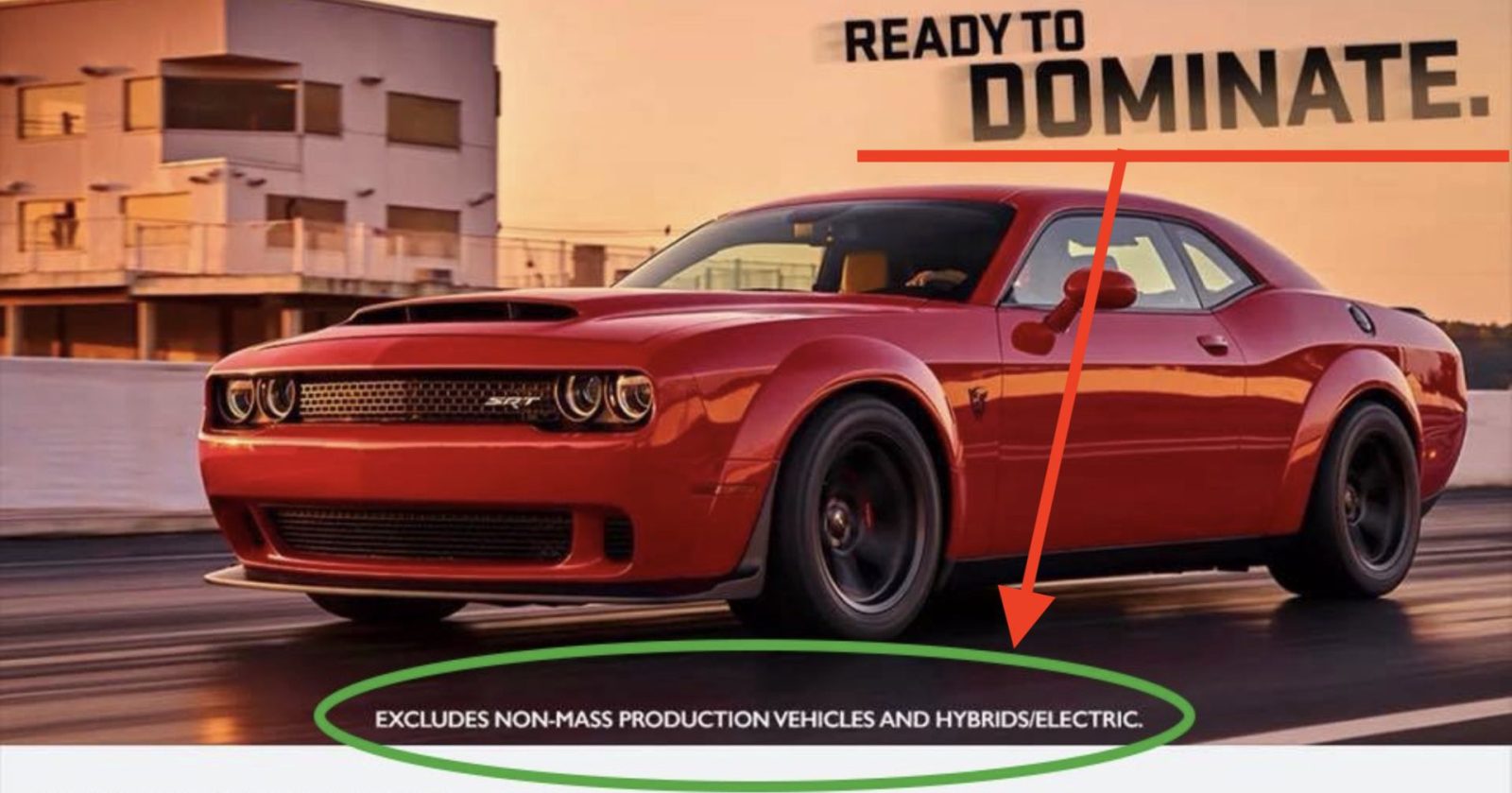 Automakers currently don’t spend a lot of money advertising their electric vehicles and Fiat Chrysler is certainly guilty of it.

But one of their ads for the new Dodge Challenger Demon actually turned out to be one of the best ads for electric vehicles that we have seen to date.

An interesting study of advertising instances and spending for electric vehicles by automakers that came out a year ago shows that they are pushing to sell EVs significantly less than gas-guzzling cars, and are not spending a lot of money to try to educate the public about electric propulsion.

But in the meantime, Fiat Chrysler is doing its part through an ad campaign for its new Dodge Challenger Demon.

In the ad, first spotted on Facebook by Twitter user @WiebeWkkr (see below), Dodge boasts about the Demon’s acceleration – claiming “the world’s fastest 0-100-mph production car”, but they had to add some fineprint to say that it “excludes non-mass production vehicles and hybrids/electric.”

This is rather hilarious. Dodge promoting their Challenger as the fastest 0-100 mph production car in the world but the small letters read "excluding electric vehicles". Even marketers at traditional OEM's don't know anymore what their cars' unique selling points are. #EV pic.twitter.com/Ho3Jb2l7k2

Aside from the ad campaign, Dodge also had to add the same fineprint on their website – though it’s a little harder to find.

Where they make the claim of “the world’s fastest 0-100-mph production car”, if you click on the ‘7’ next to hit, you get the same message:

While it’s good advertising for EVs to have those mentions, it looks like Dodge put them there to play it safe and could have potentially got away without them.

They specifically claim the title for 0-100 mph and I am not aware of any “non-mass production vehicle”, electric or not, that can beat the Demon’s 5.1 second time.

Of course, we can argue what constitutes a “non-mass production vehicle” since the Dodge Challenger SRT Demon’s top performing version itself has a limited production run – thought it’s still more units than the number of Bugatti Chiron and Porsche 918 Spyders.

As for “production” electric vehicles, the Tesla Model S P100D with the Ludicrous upgrade is definitely the quickest and while it reportedly can beat the Demon from 0 to 60 mph, it takes about a second longer to get to 100 mph.

The two cars actually faced off at the drag strip a few weeks ago and they each won one race:

To be clear, this is not a slight at the Demon. While I’m not a fan of gas-powered cars, the Demon is certainly as impressive as it gets when it comes to American muscle.

Of course, Dodge is not alone in doing this. Tesla and pretty much every other automaker have done this at some point.

But I think it’s still interesting that Dodge’s lawyers felt the need to add the fineprint to their ad campaigns.

By the time the next-gen Tesla Roadster comes out, every gas-powered car automaker will have to add these disclaimers.