2018 is starting on the right foot for Tesla in China. After the government opened the door for the company and other foreign electric car makers to make EVs in the country, China has now announced a significant reduction in import duties for cars, which will especially benefit Tesla since its currently the company’s only way to sell vehicles in China.

Tesla is planning to take advantage of those changes and is currently planning a significant push in the country with a much larger retail presence.

On its Chinese website, the Tesla is currently listing hundreds of new positions in China – many of them appear to be for new retail locations.

Tesla already operates over 80 stores and service centers in the country and its recruitment effort points to many more in the near future.

The opening of the store even featured the Model 3, which is not yet available in the country, and it attracted a large crowd (pictures above and below via Hunan Daily):

Tesla has already started to take the Model 3 on tour in China to a “showcase event” ahead of the vehicle’s launch: 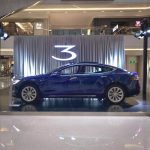 The automaker has yet to organize similar events in Europe, where it has also yet to launch the Model 3 – showing an emphasis on China, which is now the biggest auto market in the world.

This week, Tesla also opened a new store in Shenzhen, where dozens of Model X owners showed up to give a little show:

China has put in place many incentive programs for electric vehicles, but that’s especially true in Shenzhen.

The megacity plans to soon electrify all public transit and it already has a massive fleet of 16,000+ electric buses – the largest in the world by far.

Earlier today, the Chinese Ministry of Finance confirmed that they are lowering the import duties on vehicles from 25% to 15%.

Despite 25% import duties, the California-based automaker has doubled its sales to over $2 billion in China last year and they by far lead foreign electric car sales in the country.

The 40% reduction in import duties is coming just at the right time for Tesla to launch the Model 3 and before they can establish their own local manufacturing and get around the whole import tariff.

An announcement about a Tesla factory in China is expected soon now that the automaker has set up a new company in Shanghai’s Free-Trade Zone.