The U.S. fifth-largest solar developer Cypress Creek Renewables announced they will cut $1.5 billion in investment because of the tariffs imposed last year by the Trump administration.  G.O.P senators sent a letter to the Energy Department’s secretary Rick Perry so particular panels hit by the tariffs may be exempted.

“The group of eight senators led by North Carolina’s Thom Tillis urged the administration to waive duties on 72-cell, 1,500-volt panels that are ideal for large ground-mounted “utility-scale” projects, according to a letter which was tweeted Friday by the Solar Energy Industries Association. The panels are too big for household rooftops and are only used on giant solar farms or vast, flat-topped warehouses.”

Solar production in the states represented by these senators mostly use these specific large panels. 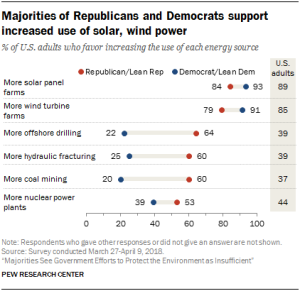 Also of interest is that most Americans, according to this poll, perceive the U.S. federal government do too little to protect water and air quality and for the struggle against climate change.

A new study published in the journal Proceedings of the National Academy of Sciences details a new way to build more efficient lithium metal electrodes for battery use. Previous electrodes were inefficient and limited battery development.

Yet existing lithium metal electrodes, limited by low capacity and utilization efficiency, have not come close to reaching that potential. Based on the new process, the researchers constructed a battery cell that outperforms other laboratory-scale battery cells, as well as state-of-the-art lithium-ion batteries on the market.

Batteries in the future might have a larger capacity thanks to this Sino-American innovation.

Featured image is from the Department of Energy SunShot program. Solar PV panels on top of the mountains in Colorado during winter. Photo by Carlo Altamirano.