Uber gets Jump on ebike sharing with reported $100M acquisition 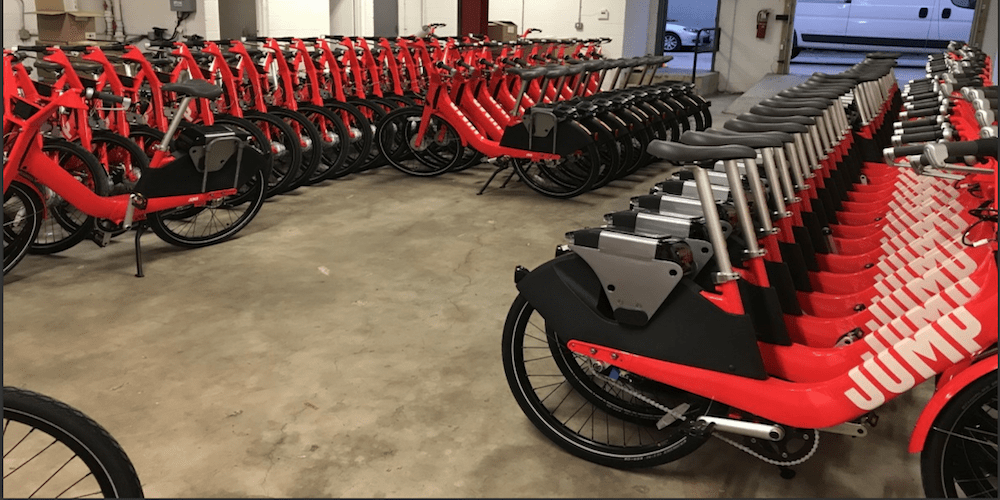 Announced by the company today, Uber has bought the ebike sharing company Jump for reportedly around $100M to $200M.  This could be a boon for ebike sharing and it has everything to do with Uber’s *uber* popular app and the integration of “ebiking” as a cheaper, more fun, and often quicker option than calling a car. Oh, and without fossil fuels…

Jump Bikes is a pretty good value proposition on its own. You get 30 minutes of ebiking for $2 (plus some fees). With the boost of an electric engine that’s 10+ miles of travel through often busy streets or on bike paths where cars can’t go for almost nothing.

But you have to sign up for the service and become a member, which may seem like a bit of a stretch for some people, especially knowing that there are currently only 250 of these things in and around San Francisco (and a few more in Washington DC).

Go farther. Get there faster. Have more fun. -Jump Bikes

That’s why I think further integration into the Uber app will be such a big deal, especially as the service expands into more cities. With Uber’s almost ubiquitous app, the transaction cost of getting an ebike will be lubricated. You’ll ask for a ride to a restaurant for 1 person. The Uber app will tell you that surge pricing makes the trip $12 and someone may show up in 10 minutes.

It is a sunny day, why not give it a try? Soon, folks are hooked and hopefully buying their own ebikes.

But back to Jump, the service which started a decade ago as a traditional city bike share program called Social Bikes.

Jump will likely be fully rebranded as Uber-Bikes and is already operating on Uber’s Website.

In DC and SF, where JUMP electric bikes are on the streets, we’re seeing riders travel 3x the distance per ride on a JUMP bike in comparison to a regular bike. This is proof that JUMP e-bikes allow you to go farther, faster, and have more fun. JUMP bikes are an evolution of bike sharing that bridges the gap between cars and bikes. Partnering with Uber allows both companies to explore a future where shared bikes and shared rides work together to reduce car ownership by providing the right solution for each trip.

Jump bikes are so ugly that it appears that it was designed as a theft deterrent system, but I’d still love to travel in cities using the service. Biking is always a better experience to driving when it isn’t cold or wet. But it is often cold or wet outside of California.

There are still a lot of questions to answer. The #bikelitter is chief among them, but also how do these things stay charged, stay up to date and stay in great working condition? As the competition which includes Limebikes and a host of other companies takes shape, it will be interesting to see how municipalities react. Will universal charging stations be built?

I think by being integrated into Uber, Jump now has the lead in bike sharing and will be able to make the service available to a much wider swath of the population, especially in the US, where ebiking is still in its infancy.

At Uber, we’re focused on championing smart technology for smart cities. Today, we help tens of millions of people get a ride at the tap of a button. But our ultimate goal is one we share with cities around the world: making it easier to live without owning a personal car. Achieving that goal ultimately means improving urban life by reducing congestion, pollution and the need for parking spaces.

That’s why we’re committed to bringing together multiple modes of transportation within the Uber app—so that you can choose the fastest or most affordable way to get where you’re going, whether that’s in an Uber, on a bike, on the subway, or more.

Today I’m excited to announce we’ve entered into an agreement to acquire JUMP Bikes, an electric, dockless bike-sharing service we’ve already been testing in San Francisco. Our hometown pilot is off to a very strong start, with riders enjoying a convenient and environmentally friendly way to cruise up and down our trademark hills.

JUMP’s CEO Ryan Rzepecki is an impressive entrepreneur who has spent the better part of a decade bringing bike-sharing to life across the globe. I’m thrilled to welcome his team and their stellar product onto the Uber platform.

Stay tuned for more news as we introduce additional ways to move around your city, right from the Uber app.